Durham, NC — More than two dozen people gathered in Counter Culture Coffee’s New York Training Center Sunday morning to see Mokhtar Alkhanshali, the founder and CEO of Port of Mokha. Counter Culture opened its doors to the public for a free coffee cupping and book reading with Alkhanshali, whose company focuses on bringing high-quality Yemeni coffee to the masses. 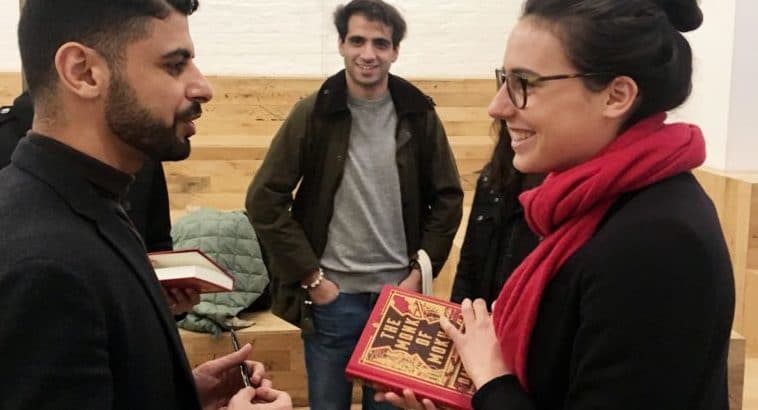 Alkhanshali is also the subject of Dave Eggers’ new book, The Monk of Mokha, which chronicles Alkhanshali’s struggles to find, improve, and reintroduce Yemeni coffee to the world in the midst of civil war in the country.

The event, which started at 10 a.m., brought together literary enthusiasts and coffee drinkers alike for an interactive event that kicked off with a tasting of some of Counter Culture’s coffees. After discussing the relationship-building that Counter Culture bases its business on, Alkhanshali read a few passages from The Monk of Mokha that described the highly involved and intricate process that coffee goes through before it reaches the public.

“We should know where our food is coming from,” said Alkhanshali. “We should feel more connection to it and appreciate and respect it.” When asked about how sustainable he thinks his business is given the tumultuous political climate in Yemen, Alkhanshali said that he is focused on the long term.

He said that his hope is that the incredibly difficult—and, at times, life-threatening—work that he and many producers are living through now will lead to economic and social empowerment for people once the war ends. And, while it seems like an overly ambitious goal to many, he knows that it’s well worth his efforts.

As the event came to a close, the entrepreneur thanked Counter Culture profusely, and said he hopes to do more events like this in the future. He noted the influence Counter Culture has had on him and said that much of his initial coffee education came from Katie Carguilo, a coffee buyer for Counter Culture, and the rest of the team at the company’s Emeryville location. The intimate event brought together both seasoned coffee professionals and those new to cupping coffee and gave an audience to Alkhanshali, whose passion for coffee captivated everyone throughout the gathering. Counter Culture looks forward to hosting Alkhanshali again in the near future.

About Counter Culture Coffee Founded in 1995, Counter Culture Coffee is dedicated to finding and bringing to market the most exciting and delicious coffees in the world. The company’s vision is to pursue coffee perfection by creating partnerships dedicated to environmental, social, and fiscal sustainability. Counter Culture has 12 training centers across the country including locations in New York; Chicago; Boston; Washington, D.C.; Philadelphia; Asheville, NC; Atlanta; Charleston, SC; Emeryville, CA; Los Angeles; Seattle; and its headquarters in Durham, NC. Served in some of the country’s top restaurants, Counter Culture Coffee is available in coffee shops, specialty grocers, and online at counterculturecoffee.com. For more information, please contact Brand Manager Jen Hoverstad via email at jhoverstad@counterculturecoffee.com.