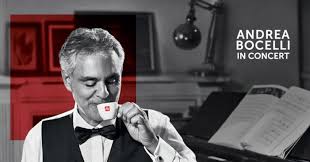 illy, the global leader in high-quality, sustainably sourced coffee, has brought its new international advertising campaign to North America that features, and is inspired by the art of the world’s most beloved tenor Andrea Bocelli. With Bocelli as muse, and now illy’s central brand ambassador, the campaign celebrates and illustrates a mutual belief that creating something unique, in every aspect, requires a daily, never-ending commitment to perfection; a commitment invisible to all others that serves the ultimate goal of offering the world one’s best, always.

The creative, from DLV BBDO, elegantly illustrates how such an enduring commitment to perfection in turn creates fundamental happiness for illy and Mr. Bocelli alike, and reveals to all the deeper meaning of what it means to LIVE HAPPilly. For illy, it is part of a never-ending movement to bring the world closer, and closer to the ancient Greek-rooted ideal of beauty and goodness intertwined: the foundation of illycaffè’s own philosophy that inevitably creates stories of passion, and inspires exceptional dedication and attention to detail. Happiness for illy lives within the many complex steps required to perfect its unique blend of the world’s highest-quality Arabica beans, sourced from nine countries, to offer the world the best coffee possible.

“For our new advertising campaign we took an authentic approach to reflect the heritage of illycaffè, a company that has 85 years of history,” says Massimiliano Pogliani, illycaffè CEO. “Andrea Bocelli is a true brand ambassador, someone who represents illy’s core values in his daily life, a story that is creatively and beautifully told to communicate the meaning of LIVE HAPPilly.”

A 60-second spot available for viewing on www.illy.com, translated from the original Italian version, pays tribute to the art and methodical professionalism of Mr. Bocelli. Filmed in elegant black-and-white, it tells the story of illy through values shared by artist and brand. The artist is shown not on stage, as we are accustomed to seeing him, but rather in his everyday life, behind the scenes and with the people dearest to him: his wife, his eldest son on piano, and his friend, the master flautist Andrea Griminelli. We see him at home, in the rehearsal room, at a restaurant, and walking the streets of New York enroute to the Metropolitan Opera House, where the narrative intensifies with his arrival on the stage: the moment in which happiness is achieved upon sharing his art with the world (in this instance, with the opening notes of the aria “Mattinata” by Leoncavallo). Finally, the kinship with illy is revealed, with the words, “perfecting who we are is a never-ending story to offer the world our very best.”
Companion videos, also shot in black and white, feature Mr. Bocelli as lead ambassador, along with others from the realms of art, music, design, cuisine and sustainability who embody illy brand values, in interviews revealing their inner thoughts about their passionate pursuit of innovation and continuous search for perfection. Internationally renowned director and photographer Vincent Peters led the campaign, in which the emotionally-rich black-and-white imagery is accented by only the iconic “illy red” and the colors of illy products themselves.

Among these authentic illy ambassadors are the designer Ron Arad, Michelin-starred chef Caterina Ceraudo, photographer Maurizio Galimberti, flautist Andrea Griminelli, Master Pastry Chef Sal De Riso, and José Dìaz Enamorado, winner of the Ernesto Illy International Coffee Award, which each year recognizes the world’s highest-quality sustainably-grown coffee. Their stories, along with that of Andrea Bocelli, live on illy.com providing illy fans with access to compelling content that can be shared through social media, along with special features and newsletters that offer exclusive content available to subscribers.

The campaign is being supported through social media channels, and integrated with select media partners and illy brand experiences including an opportunity for one illy fan to win a trip for two to see Andrea Bocelli live in concert on June 20th, at the Hollywood Bowl, Los Angeles. www.illy.com/bocellicontest