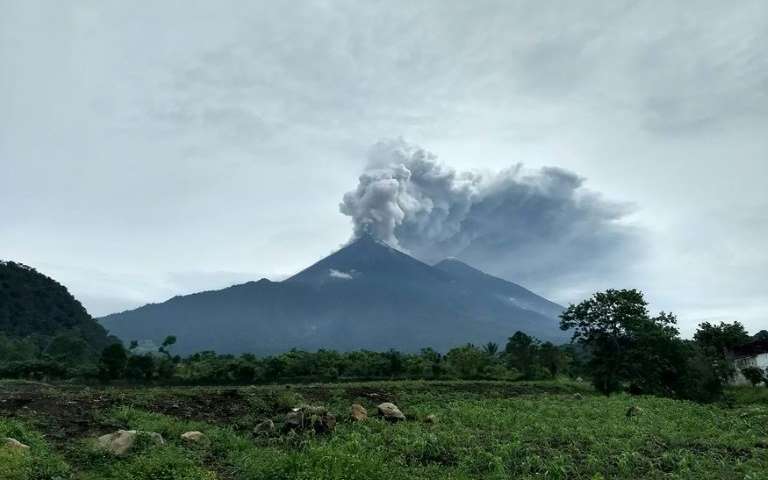 The Fuego volcano eruption has caused many casualties but together we can help. Anacafé and Funcafé have set up collection centers in their central headquarters and regional offices.

Guatemala, 3 June 2018. The Board of Directors and staff of Anacafé (the National Coffee Association) and Funcafé (the Foundation for Rural Development of the Coffee Sector) express their condolences and sympathies to the relatives of those killed in the Fuego volcano eruption this afternoon and all those affected.

We have set up collection centers in the regional offices and our central headquarters in 5th Street 0-50, zone 14 (la 5a calle 0-50, zona 14). We hope that this will go some way to supporting and coordinating efforts to mitigate and overcome this crisis.

Those affected need non-perishables, canned food, clean water, blankets and clothes in good condition. We also need medication for eye and skin burns, saline solution to wash burns, oral saline solutions and dressings. All donations will be distributed by our staff in collaboration with CONRED (The National Coordination for Disaster Reduction).

We recognize the work of CONRED, the emergency services, the Guatemalan Army, the National Police and all the other institutions that are involved.

The sand and ash that fell during the Fuego volcano eruption has affected parts of Escuintla, Sacatepéquez, Chimaltenango, Guatemala, El Progreso and some regions in the east of the country, in particular the coffee growing areas in the south-west. Volcanic material fell for 1-1.5 hours over production areas leaving deposits on the leaves of the plants.

Some damage has been reported to production units in the village of El Rodeo, Escuintla. In Alotenango it is thought that the sand and ash has affected between 15 and 20% of the coffee growing area or somewhere between 1,540 and 2,055 manzanas (1) of coffee growing land.

In parts of Chimaltenango, the area affected is somewhere between 1,900 and 2,000 manzanas mainly in the communities of Acatenango, San Pedro Yepocapa, El Tejar, Chimaltenango and San Martín Jilotepeque.

The coffee growing area closest to the volcanic cone (high area) and the areas without shade are the worst affected. A more accurate estimate of the damage to coffee production caused by the eruption will only be known once we have seen how the weather behaves and the fruit has developed.

In parts of the coffee growing region, the damage has been reduced by rain which has helped wash the coffee plant leaves and dislodge the ash. Where this has not been the case, producers should shake the plants to get rid of the ash from the foliage (leaves) and water the seedlings to remove any ash that is still stuck to them.

Spraying the leaves with amino acids is also advised since it will help the coffee plants stave off the effects of the ash.

1 A manzana is a unit of measurement equivalent to approximately 7000 square meters.