For the first time, the talent show was won by a participant from the hosting country 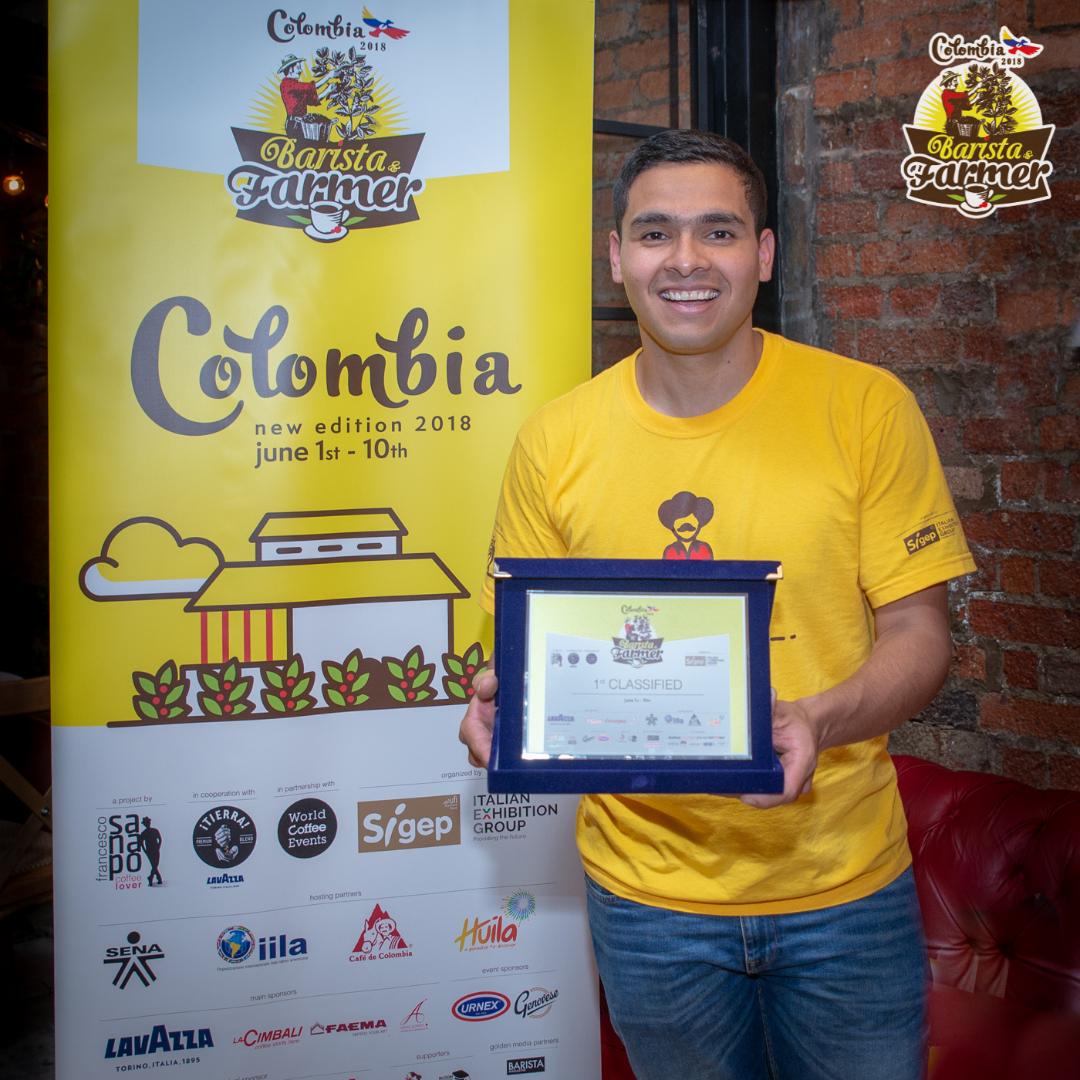 “For the next edition of the show we already received applications from several countries,

Diego Campos, 28 years old Colombian talent, former national barista champion in 2014 and 2016, is the winner of the fourth edition of Barista & Farmer, the only talent show dedicated to coffee culture, created by Francesco Sanapo, multiawarded barista champion, in collaboration with Italian Exhibition Group and SIGEP, which took place in the Huila department in Colombia.

“It’s been the best experience of my life. I believe that this victory represents a better future for my country, and better opportunities for the farmers, ans this is what I want for the future generations. Coffee, hospitality and beautiful people: this is Colombia” said Campos.

The final results of the many challenges of this fourth edition of Barista & Farmer are the following: team Six Monkeys, lead by WBC 2011 world champion Alejandro Mendez, won the picking competition, the trial where baristas have to collect the most and better cherries; team Yukka Yukka, captained by italian coffee lover Nino Conti won the Urnex competition which was about combining machine pieces with the correct cleaning tool; Yukka Yukka was the overall team winner of the show, composed by colombian Diego Campos, russian Vicktoriya Rovenskaya, icelander Vala Stefansdottir, brazilian Daniel Munari and croatian Matija Matijasko. The Sanjuanero dance competition was won by the couple formed by australian Glenn Bailey and russian Vicktoriya Roveskaya. The special picking competition was won by colombian Diego Campos, who was awarded of a special price by Michele Cannone, head of Food Service Marketing of Lavazza.

Francesco Sanapo, who lead the group in each step by encouraging the baristas in every moment, declared: “The overall balance of this experience is super positive because we raised the bar on every aspect, from the competitions to the production of the talent itself. We are already questioning ourselves on how to make the next edition even better. I didn’t expect Diego to win, it’s been the first time, in four editions of the show, that the talent was won by the local barista. It’s been a special edition, you could easily tell by the closing ceremony where everyone cheered for the winner. I think that he won because he showed himself as a willing spirit, he always set the example: a guy of an endless sweetness who emerged as the leader and charismatic figure of the whole group. And he picked a lot, he always had great results in those competitions. For the next edition of Barista & Farmer we already received applications from several countries like Ecuador, Costa Rica, El Salvador, Dominican Republic and China. I hope that others will follow them, I will evaluate the final destination with Italian Exhibition Group, Lavazza, Cimbali and all the other partners of this wonderful experience.”

“The Reality Show of coffee with realization in the coffee lands of Huila gave as winner of the 4th edition the Colombian Diego Campos. With a closing highlighting the culture of Huila, the 4th edition of the reality show Barista & Farmer ended with the wonderful coffee lands of Huila, where 10 participants from different countries of the world lived the daily life of a coffee farmer from the region. The 10 contestants knew everything about the coffee culture of the region also toured the archaeological park of San Agustin, painted a Chiva and danced the San Juanero Huilense. This in order to become ambassadors of Huila department in each of their countries – commented Juan Sebastián Gutiérrez Botero – Head of the Office of Productivity and Competitiveness of Huila – moreover, the alliances that this event left between coffee producers and international buyers and exporters allowed an important pillar for which we have fought, reducing intermediaries as much as possible and the opportunity to manage academic agenda. Coffee growers have reached agreements and alliances that will increase the coffee economy ”

Luisa Fernanda Gallo, Advisor of International Relations – Headquarters SENA, added: ““Barista & Farmer has been an enriching experience for the producers in the farms which were all beneficiaries of SENA, moreover, with the Academia Barista & Farmer we certified more than 30 producers and professors from all around Colombian in best practices of Coffe transformation, the best Baristas and Coffe experts of the world shared their knowledge with SENA professor and apprentices. Barista & Farmer has connected the colombian coffe culture to baristas all over world, as an institution part of the Colombian Government we were happy to host this important event and we hope this will be just the beginning of more opportunities to promote the Colombian Coffe and the incredible people behind the production of our national product”

“Barista & Farmer 2018 edition has been particularly significant – claimed Patrizia Cecchi, Exhibitions Italy – Executive Director of Italian Exhibition Group – because it highlighted those features that, from the standpoint of a fair organizer, are key for the development of the coffee business. Which means an even more specialized coffee culture by the producers – that ranges 360 degrees from the picking to the distribution – the necessity of a deep professional education and a greater tendency to internationality. These are also the cornerstones of Sigep’s organization, a fair which is more and more focused on coffee and that will celebrate its 40th edition next January. The professionists who took part in the talent show in Colombia demonstrated the effectiveness of this format, ideal to promote the specialty coffee and quality coffee culture, and the applications that we already received for the next edition bear witness to this.”

Lavazza supported Barista & Farmer in a key country for the coffee market – declared Michele Cannone, Head of Food Service Marketing of Lavazza – in Colombia we are present with the ¡Tierra! global project which involved the communities of the Mesetas municipality, in the department of Meta, through the Giuseppe and Pericle Lavazza Onlus Fundation, where for a long time coffee cultivation has not been practiced. The project of the Lavazza Fundation developed in collaboration with the Rainforest Alliance ONG helped more than one hundred families of colombian farmers to restore the coffee plantations, creating sustainable working conditions and raising the coffee quality as well as the productivity of the plantations through sustainable cultivation standards.”

Relive this experience on www.baristafarmer.com and on the social medias of the show.

The video with the awards ceremony is at the following link