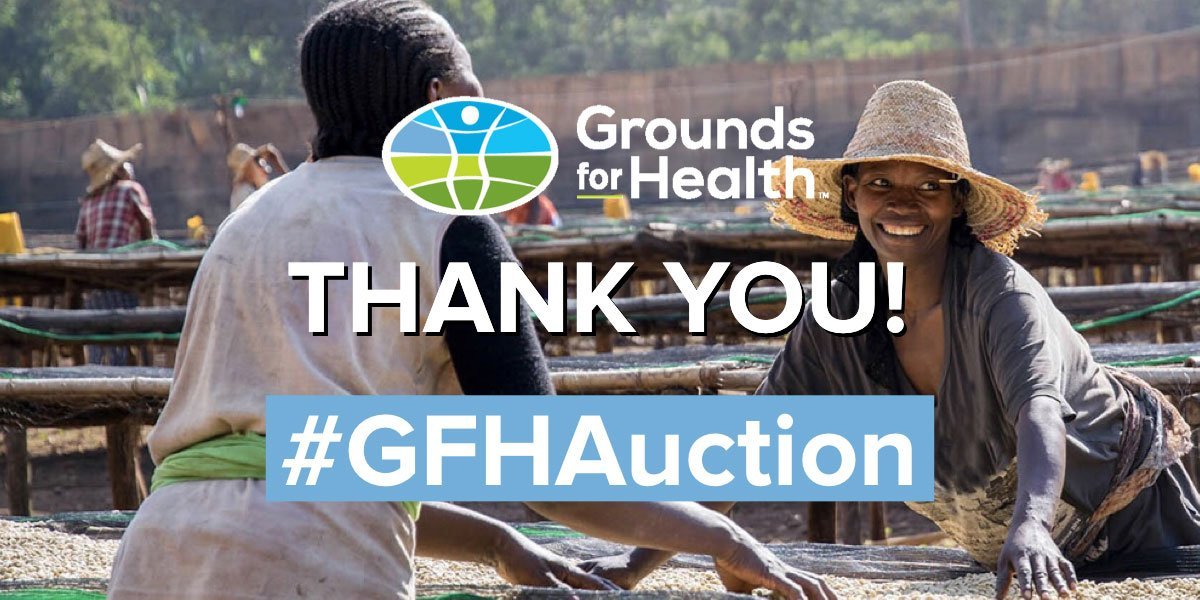 Williston, VT– June 17, 2019 – The Grounds for Health Coffee Auction started in 2009 as a way for importers and roasters to have a direct impact on the lives of women in coffee communities. While the price of coffee has gone up and down over the years, one thing has remained constant: the resolve of the coffee industry to support the wellbeing of those at origin.

This solidarity comes through loud and clear through the results of this year’s Grounds for Health Auction. This annual fundraiser benefits cervical cancer prevention programs in various coffee communities of East Africa. “We support Grounds for Health and the annual auction because we support women in coffee producing countries and protecting women from the threat of cervical cancer saves lives,” explains Spencer Turer, Vice President at Coffee Enterprises. “Maintaining families with healthy mothers and wives is critical for the development of children and fundamental for a productive society.”

Thanks to 27 generous donors, the #GFHAuction celebrated its 10th year by raising $30,570, blowing past the initial goal of $25,000. Colombia’s Hacienda El Roble followed up last year’s record with another all-time high. Their exclusive bird-friendly certified HR 61 organic coffee from the Santander region of Colombia sold for a record $150.10 per pound. This coffee was also the highest grossing single lot, earning $4,004 for Grounds for Health.

While Hacienda El Roble set the record, Brazil’s Daterra Coffee raised the most for the non-profit, taking in $5,232 from five lots. During active bidding, the auction itself raised $29,570 and then InterContinental Coffee Trading stepped up with a generous donation to take the tally over $30,000. From Allegro Coffee Roasters to Walker Coffee Trading, the donors contributed world-class lots to make this year’s auction a rousing success.

In addition to coffee, the Grounds for Health Auction also featured equipment from Bunn and Baratza as well as service donations from Coffee Enterprises and Boot Coffee Campus. Finally, as part of the 10-year anniversary, CoffeeTalk Media, Ben & Jerry’s Homemade and Baratza each donated special prizes that went out to select bidders.

Every dollar raised goes directly to help Grounds for Health bolster its cervical cancer prevention programs in Ethiopia and Kenya. Since 2009 Grounds for Health auctions have raised more than $917,000 for the Vermont-based non-profit.

Grounds for Health would like to thank all donors for their generous gifts and prizes and to all the bidders who got involved. To view final results and participate in the next auction, visit: http://www.gfhauction.org.

About Grounds for Health
Founded in 1996, Grounds for Health is a 501(c)(3) organization headquartered in Williston, Vermont with a mission to reduce cervical cancer among women in developing countries. With active programs in Ethiopia and Kenya, programs to date have resulted in more than 100,000 women screened, more than 6,700 women treated and 1,300+ community healthcare providers trained. Grounds for Health aspires to be on the cutting edge of innovations that will transform cervical cancer prevention at scale. More information can be found at www.groundsforhealth.org.