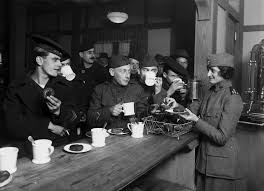 When you go for your morning coffee on September 29th, which marks National Coffee Day, take a minute to consider the impact of coffee 100 years ago on the very day.  At that time, the United States was in the midst of World War I, and coffee was just as essential to the troops as bread, not just for nourishment, but as a warm reminder of home. In fact, according to the 1919 report, America’s Munitions, 1917-1918 by U. S. Assistant Secretary of War Benedict Crowell, the yearly ration of coffee for each service personnel was 27 pounds. In 1918 alone, the U. S. Quartermaster provided more than 75,000,000 pounds of coffee.  Coffee was so important to the troops that even when fresh coffee was not available, a form of instant coffee, called soluble coffee, was issued to them in tins. And to keep coffee hot when a field kitchen was not at hand, Crowell related that “specially constructed cans, made on the principle of the Thermos bottles” were used.

The flavor quality of coffee was also important, even in in the midst of war. To get the most flavor from coffee for almost 3 million men and women serving overseas, it was determined that sending the beans while they were still green helped preserve the flavor until they could be roasted upon arrival.  So great was the demand for a hot drink of coffee that the infant soluble coffee industry in the United States was taken over by the Army, which produced about 6,000 pounds a day in 1918.

Multiple letters from soldiers in the collection at the National WWI Museum and Memorial include coffee as a topic of discussion.  For example, U. S. soldier Thomas Shook wrote to his parents from France in 1918, and explained how he was trying to make the best of the situation serving alongside the British who ate their rations without coffee: “We are on the other fellows [British] rations here but will soon be getting our own again. I like the bread, tea we get here. You know I’m no tea drinker at home but this hits the spot. Three of we fellows yesterday went into a small eating house and had two fried eggs, a bun, butter and coffee which cost us what would of amounted to 35¢ at home. They are prohibited by laws from furnishing a meal that would cost more than that amount.”

On August 7, 1918, Thomas Shook wrote home about the YMCA canteen where: “I have gotten to be a regular coffee drinker now. They make such good coffee here too, plenty of sugar and milk with it.”

Another soldier, Herbert Naylor, wrote a few weeks after the Armistice of November 11, 1918: “We had a holiday and all the troops went out to the YMCA Field early in the morning with the Band and the Chaplain gave our address. We came back and had breakfast at 10 o’clock. It consisted of pancakes, syrup, bacon and coffee.”

Among the other major forces at war, the German Army tended to rival the Americans in their consumption of coffee. In their knapsack, which normally weighed more than 21 pounds, the German soldiers always carried the essential coffee tin.

When the British Navy imposed the blockade on Germany, the delivery of coffee to the soldiers and civilians slowly dried up. Exhibitions in Germany argued how substitutes (ersatz) were just as good (but probably not): acorns for coffee, paper fiber for canvas, roasted plum leaves for tea, and war bread with rye and potato flour (and even sawdust) for wheat.

While there were no coffee shops on every corner in Europe during the war, coffee drinking soldiers and sailors could still get that hot cup of coffee!

The National WWI Museum and Memorial has been collecting internationally since 1920 and is actively seeking coffee-related objects and documents from 1914-1919. Visit theworldwar.org for more information.