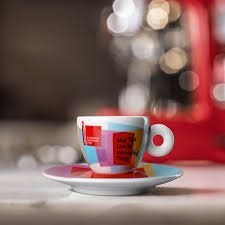 – illycaffè, a global leader in the high quality coffee segment, brings its #THANKS4THECOFFEE  initiative to life today to recognize  International Coffee Day,  as designated by the ICO (International Coffee Organization) to celebrate coffee throughout the world.  Since 2016, illycaffè has marked the day with an initiative called #THANKS4THECOFFEE, which strives to forge deeper connections among consumers and those working in the first, and most critical, link in the production chain: the world’s coffee farmers.

In keeping with the focus designated by the ICO for this year’s occasion, Women in Coffee, illycaffè has created a special cup that serves as both a social experiment and striking statement about women’s vital role in coffee growing. The porcelain cup looks like a typical cup until rotated to reveal that it is actually a cup that has been cut in half.  According to the ICO, nearly half of the people working in the coffee production chain are women, 25 percent of whom manage a fazenda (coffee plantation), further underscoring the active and vital role that women have in the coffee industry. The halved illy cup invites reflection of what would happen – what would be lost – without women’s contributions to coffee growing.

Illustrating Women’s Impact on Coffee Production:  The HALF A CUP, dedicated to women who work every day in the coffee supply chain

“What would the world of coffee look like without women in coffee?”  Today, illy flagship stores in Abu Dhabi, Dubai, Kuala Lumpur, London, Milan, Paris, Rome, San Francisco, Seoul, Trieste, Tokyo and Vienna will serve espresso in the specially-designed halved cups. Guests at the cafés will learn about the cup’s symbolism and women’s role in coffee growing through on-site communications.  illycaffè also released a video today on www.illy.com featuring the symbolic cup that indelibly conveys that without women, the world  would have but half the coffee that it enjoys every day.

Coffee lovers will also have the chance to join in the effort in thanking women in coffee, by leaving messages of gratitude with a card that will be available in participating illy Caffè shops and coffee bars. They can also share their thank you messages on social media using the hashtag #THANKS4THECOFFEE.

illycaffè support for women who work in coffee did not begin on October 1st nor does it stop after this moment. The Company has engaged in efforts for many years as the role of women continues to be a critical part of the coffee industry.  The initiative is about awareness, recognition and to inspire others to sustain women’s role in coffee in a positive way.

In 2014, illy backed the production of A Small Section of the World: the docu-film directed by Lesley Chilcott about the women of ASOMOBI (Asociacion de Mujeres Organizadas de Biolley), the association of women coffee producers that live on the Cordilliera de Talamanca in Costa Rica, which depicts how women are a fundamental component of the coffee culture. Other initiatives include the Women in the World of Coffee: the international seminars organized by illycaffè and Fondazione Ernesto Illy to empower women’s participation in the coffee sector; The Masters in Coffee Economy and Science, which has graduated 61 women from 2011 to 2018, thanks to scholarships from the Ernesto Illy foundation; And, the support of associations for women farmers of Colombia, from which illy purchases coffee with the goal of sustaining the work of these women and transferring knowledge and sustainable coffee farming practices. During Colombia’s civil war, women played a fundamental role as peace ambassadors and without their work many coffee plantations would have been completely abandoned.

Find out more about illy’s commitment to supporting the work of women on www.illy.com.

illycaffè is an Italian family business, founded in Trieste in 1933 and committed to offering the greatest coffee to the world. illy is the world’s most global coffee brand, producing the unique illy 100% Arabica blend made of 9 of the world ‘s best selections of Arabica; each day more than 7 million cups are served in over 140 countries in the finest cafés, restaurants, hotels and in offices and homes. illy has become the standard forerunner of espresso, and thanks to three critical innovations, is considered the leader in the science and technology of coffee. With the bestowing of the first “Ernesto Illy Award for quality espresso coffee” in 1991 in Brazil, illy also pioneered direct sourcing, sharing know-how and paying a premium price for the best quality, based on partnerships underwritten by the principles of sustainable development. The company also founded the University of Coffee with the aim of fostering and spreading its culture, providing comprehensive academic and hands-on training for coffee growers, baristas and coffee lovers in order to cover every aspect of the product. Everything ‘made in illy’ is enhanced by beauty & art, which represent founding values of the brand, starting from its logo – designed by an artist, James Rosenquist – and including the renowned illy Art Collection, comprised of over 100 cups designed by international artists. In 2017 the company was employing 1,290 people and posted consolidated revenues of €467 million. There are approximately 244 stores and mono-brand illy shops in 43 countries.