Coffee customs in Jordan are much more than a drink and are a deeply ingrained part of the culture. From Bedouins to Ammonite youngsters, coffee is an essential element and component of everyday life and a reflection of the warmth and respect of Jordanian people.

In Jordan, coffee is much more than a drink, it is deeply rooted in Jordanian culture, a tradition dating back hundreds of years. Deep and dark in color, the rich flavorful Arabic coffee is spiced with aromatic cardamom and served piping hot. Coffee serves as a common ground, a way to bring people together and beyond this ideal, coffee is a symbol of trust and hospitality as well as a sign of respect and honor in Jordan. The Hashemite Kingdom of Jordan is known for their warmth and hospitality, which is reflected in the traditions and customs of coffee.

In the history of the Bedouins a nomadic tribe indigenous to the region who today make up 27% of the Jordanian population, coffee is a vital part of welcoming and hospitality. In the past, caravans would pass along the spice route and transport coffee from Aqaba to Iran as well as Iraq. There is a specific process and order in the way coffee is prepared in served amongst the Bedouins. In Bedouin culture, coffee is an integral part of weddings, holidays, celebrations, mourning periods as well as everyday life. By extending oneself and offering coffee, as well as accepting it builds mutual trust, understanding, and goodwill. Coffee is also connected to the notion of communication, as in, it can open dialogue and negotiations in a manner which works to problem solve and resolve issues. 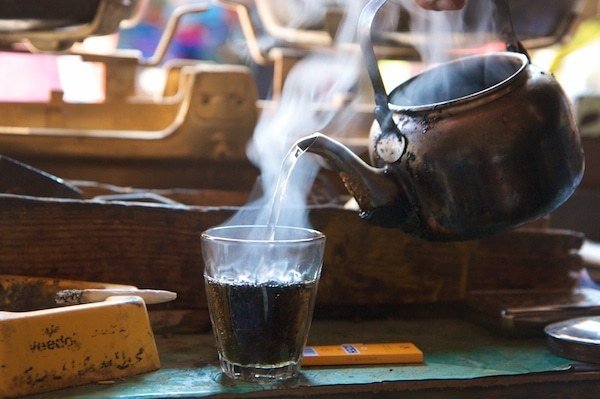 Nizar Al Hani who is part of the biggest Bedouin tribe in Jordan known as the “Bani Hassan” explains how coffee is a form of communication. “If a person wants to request something from another, they will offer a cup to drink. Instead of drinking the coffee, a hand is held out and eye contact is made with the host, the cup is then put back on the table indicating the request has been met. The host will ask the guest to spill out the request. If the reply is positive, then the host will tell the guest to drink the coffee and if the reply is negative it is up to the guest to drink, or get up and leave without drinking in order to show respect”. Al Hani continues that, “The decision to drink or not has to do with the relationship of the host and the guest and the seriousness of the matter”.

According to Bedouin tradition, the coffee is prepared in a specific manner. For starters, the beans are usually roasted in an open pan placed directly on the fire, which also releases the aroma of roasted beans which is very inviting. Water is then boiled over the fire. Roasted beans are ground using a mortar and pestle type utensil called a mehbash. This serves to grind the beans, at which point cardamom pods are also ground up and added to the ground beans and then the boiled water is poured over the bean and spice mix. The water seeps into the beans infusing flavor until it is just right. The flavor is strong, robust and powerful.

In general, coffee is served in small glass cups that do not have handles. Coffee is meant to be enjoyed and the process of drinking the coffee is slow and relaxed. Traditionally, up to three cups of coffee can be enjoyed and each cup is symbolic of a different ideal. The first cup represents the soul, the second embodies the sword and the third cup is representative of guest status in the home. To indicate another cup is not required a simple shake of the cup will indicate to the host not to refill the cup, whereas simply handing an empty cup over to the host implies another refill. It is considered impolite not to accept a cup of coffee upon entering the home and is a gesture of respect to take the coffee that is offered.

As seen in the history of Jordan, most notably amongst the Bedouins coffee is used as a method to gather friends and family and the community. Today, in Jordan, from the capital city of Amman to Petra and Wadi Rum, cafes and coffeehouses continue to uphold this longstanding and time-honored tradition. The idea that the coffee shop a warm welcoming environment where family and friends can gather and share an experience is maintained today.

As more tourists arrive in Jordan each year, they are looking for ways not only to explore the diverse region but to connect to the people. According to the travel experts at Tourist Jordan, “Travelers are eager to experience Jordan first-hand, beyond the tourist attractions and are motivated to create lasting and meaningful connections. Visiting some of the many cafes in Amman or more remote desert locations, tourists are able to utilize the unique coffee culture found in Jordan to create awareness and a lasting impression”. Rumi Cafe found in the Jabal Al Lweibdeh neighborhood of Amman is a perfect example of old and new coffee behaviors fused into one. Once a small and simple cafe, Rumi has now grown in size accommodating many more customers of all ages, all eager to enjoy a warm cup of coffee. There is also Jadal Cafe which, as their website says is, “Space where culture and knowledge fuse to evoke and spread new societal values”. The concept is fresh, the space is charming an inviting as is a perfect glimpse into a non-profit initiative that serves the community, more specifically for youth initiative through art and innovation – not to mention a great place for a cup of sweet tea and of course, coffee.

The ways in which younger Jordanians are incorporating the ideals of hospitality, community, and respect as reflected from the simple idea of sharing a cup of coffee, is a long-standing tradition which can certainly be felt throughout the country. Travelers will be pleased to not only taste but smell the fresh aroma of coffee and the wide variety of options to sample while traveling in Jordan.

Tips to remember when invited into a Jordanian home for coffee:

While the traditions of coffee culture are shared from the desert-dwelling Bedouins to young and modern cafes or Jordanian homes, one thing always remains in common. Regardless of modern espresso machines and coffee advancements, the sentiment and routine of coffee are unaffected. In Jordan, it is clear that coffee is much more than a beverage, rather a fundamental part of Jordanian identity and way of life.