The coffee industry has always been responsive to the needs of others, especially in the countries that grow our products. This is particularly true around the Christmas holiday season. However, it is sometimes difficult for small companies to create a meaningful message for giving that brings out the best angels in employees and customers.

Recently, at an event hosted by Fonté Coffee Roasters at their downtown café at the Harbor Steps (in Seattle), I was surrounded by happy, cupcake filled pre-schoolers. They were from the Pike Place Market Day Care Center just down the street. The reason for all of us being there was to celebrate a donation of $11,000 to cover the costs of supplies for the school for a year! Fonté contributed a part of their sales during the Christmas season toward this gift. The size of the check even surprised Paul Odom, the owner of Fonté, who was alive with pride at being able to help this local non-profit serve its students.

What surprised Odom was the enormous jump in sales at the café. It was a direct result of his customers’ favorable response to supporting this neighborhood daycare center. “We have never had holiday sales like this ever before,” said Odom.

Fonté is not a giant company; it has limited resources made all the more scarce by the abidingly high cost of green coffees. Odom has intentionally not sought the big-time instead driving an insatiable need for extreme quality for a truly discerning audience. This season, Odom wanted to give something back to the community but was confronted by a question of scale.

“Why the pre-school?” I asked Odom. 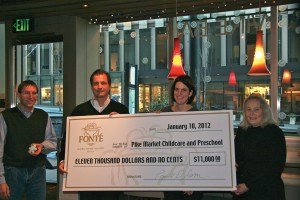 He thought for a moment, then he said that everyone in the coffee industry wants to give back in some way, but that most companies, especially roasters, are faced with choices that often are so big, so distant, and so daunting that small companies simply feel that their contribution would be too little to make a difference. The money that Fonté would potentially raise would not make a dent in a water project in Zambia, or a health care project in Guatemala. And, even though those types of projects are worthy and all contributions help, it was not soul satisfying for Odom and his small company. The scale was all wrong.

Odom is a cerebral guy; talking with him is like having a conversation with Steve Jobs. His thoughts range easily across the past, the now, and the future as if he might be strolling on a catwalk that is above our heads. You cannot lead a micro roaster for 20 volatile years without having a vision few others can fathom. The pathways he chooses to follow are often instructive, so a question like “Why the pre-school” can lead to new and valuable ideas for the rest of us.

It is that question of scale. We all want to make a difference, to move the dial a little toward a visible positive outcome. Odom saw that his small contribution would not have a lasting impression on his employees and himself if it were only a drop in the bucket toward some grand goal. He wanted to make a real impact, so when a retail customer approached him about supporting the Pike Place Market Pre-school a light went off. Here were possibilities. By focusing on buying supplies for the school, Fonté would make a firm positive impact on the lives of these small kids for the entire year. 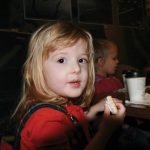 It goes without saying that organizations with global reach and with large goals…alleviating poverty in Guatemala, malaria nets in Tanzania, and others also need contributions and help from everyone. They require our ongoing support and year-round contributions. But, during the holidays, is this the kind of contribution that will motivate local customers and employees of small companies? Maybe not.

By stopping and looking around at his own community, he discovered folks right here in Seattle that would think that his effort was huge and would have a lasting effect. By thinking local, Fonté was able to have a real and immediate impact. I think that this idea of looking for the correct scale for a contribution is important, not because it gives great press but because it gives meaning to the effort. Employees at the roastery and the café have a clear picture of what was accomplished, customers knew that kids right in the neighborhood would benefit from each cup of coffee, these urban kids will have a better quality of education and, who knows, maybe one day one of them will find the cure for malaria.

For small companies, maybe we should not only buy local and sell local, but also give local. Who knows…something to think about. Looking at these very much alive three and four year olds eating Holiday cookies, I have to say yes.