Thoughts on Marketing, Meaning and Misrepresentation 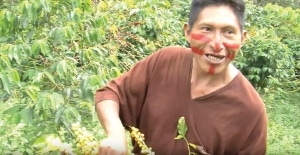 Peru: The Impacts of Development View at https://youtu.be/cqCG6Vs0Dzk

Since I came aboard in the 1980’s, the specialty coffee industry has come a long way regarding awareness of and involvement in the many social, economic, and environmental issues surrounding our products and the farming communities that supply them. In fact, what was once a trickle of awareness has become a flood, as almost every member of the specialty coffee industry seeks to participate in addressing these important issues in some way. At one end of the spectrum, many companies have made real commitments of time, energy and money. At the other end, some have done little but use the buzz words and images to send a “me too!” message to consumers, without any substantial or effective commitment.

Those involved in marketing hype do so for a number of reasons that range from simply not realizing they are doing it, to wishful thinking, to exaggeration as a marketing device, to knowingly misrepresenting (a.k.a. lying about) what they are doing. In the legal world (I am a recovering attorney) a certain amount of exaggeration and hype is called “puffery” and as a society we have come to accept this. Think “Our detergent gets clothes three times cleaner than the other brands”. There is little harm in that, as we know it’s just advertising. However, when puffery or exaggeration extends to social, economic, or environmental claims it is not innocent at all. Farmers are impacted when claims are made that they are being paid more than they are, or that development programs are successfully changing their lives. Birds and the environment can be hurt when puffed up claims are made about “sustainability”. The ability of the market as a meaningful self-regulating mechanism is affected when consumers are given a false sense of what is being done with their money and in their names. Consumers cannot make the “informed choice” that an efficient market requires if they are misled about the impact of their choices.

What are some of the ways we inadvertently or consciously misrepresent what we do? Let’s start with Fair Trade. Many companies buy Fair Trade coffee from brokers and use the generic language we have all seen about how this coffee means that farmers can keep their kids in school and put good food on the table. Two problems arise here. Firstly, on a case-by-case basis, those claims may not be true. There are a lot more factors at play regarding the health of farming communities than what price they get for coffee. Some co-ops are very efficient and successful, some struggle and some fail. Some provide great benefits to their members and others don’t. Unless you have a real relationship with the community there is no way of knowing and representing what is going on there. Second, a lot of companies that use the generic materials leave consumers with the impression that all of their coffees are Fair Trade when perhaps only a meager percentage are. In the early years of certified Fair Trade, the logo could only be used on the bag that actually contained Fair Trade coffee. It could not be used generically on your website or on the side of your delivery van. Fair Trade was an economic, contractual relationship based on those beans in that bag, not a statement about the company as a whole. Somehow that rule got dropped and companies began taking out full page ads about their Fair Trade coffee without any clarifying language that only three or seven percent of their coffee was under that label. Innocent mistake or calculated misrepresentation?

Fair Trade or Fairly Traded or Beyond Fair Trade have also become widely used terms unrelated to the certification system as companies use them as mere marketing fodder. Even “Beyond Organic” has begun to appear to make some unsubstantiated claim that “their” system is better than certified organics.

Similarly, the Direct Trade or Direct Trade Certified label has started to appear on literature and packaging of companies that don’t seem to have any higher set of principles than that they buy from a broker, but visit the farmer for a few days every couple of years or so. Is this what the founders of the Direct Trade concept envisioned?

Companies far and wide also proclaim their involvement in “development projects” that raise living standards, bring better food or schooling, etc. for farming communities. Having been involved in community development since the 1970’s I can tell you that a majority of development projects are short-lived and do not leave long-term benefits. That’s why we as a country have spent over a trillion dollars in development with little to show for it. Companies make lots of marketing noise about their donations to charities and development groups, but who ever reports back to tell the consumer that the project failed or was abandoned? A truly egregious example was one large company that did a major marketing push on dedicating up to five million dollars for wells in parched Ethiopia. Big media splash, but little water. One well was finished (it had already been started by a British charity – and not even in a coffee growing region) and after a year all the information disappeared from the company literature.

The potential for misrepresentation is also a problem around packaging. New materials are being made available in an effort to limit our landfilling waste stream. Yet many companies have gone way beyond the science in representing their packaging as biodegradable, compostable or recyclable. Part of this is simply that the science is so hard to understand, and the packaging companies themselves are making claims that they may not understand either.

Climate change is the latest area where companies are rushing to make a difference, or in some cases just sound like it. Tree planting schemes can be great, but the “tree industry” doesn’t guarantee that the trees will not be cut down, or that they’re suitable for the ecosystem they are being planted in. Compound this with the infatuation with carbon credit trading schemes. They sound good but often mean that the right to pollute is transferred to some large toxic corporation who can purchase the credits and then forego having to clean up their own act. Paying farmers to generate credits so that northern industries can continue to pollute – does that make sense?

As an industry and as individual companies, we need to be incredibly careful that we understand what we are investing in at source and elsewhere, that what we do actually has meaning on the ground, and that what we say we are doing is accurate and truthful. Let’s shade the coffee – not the truth.