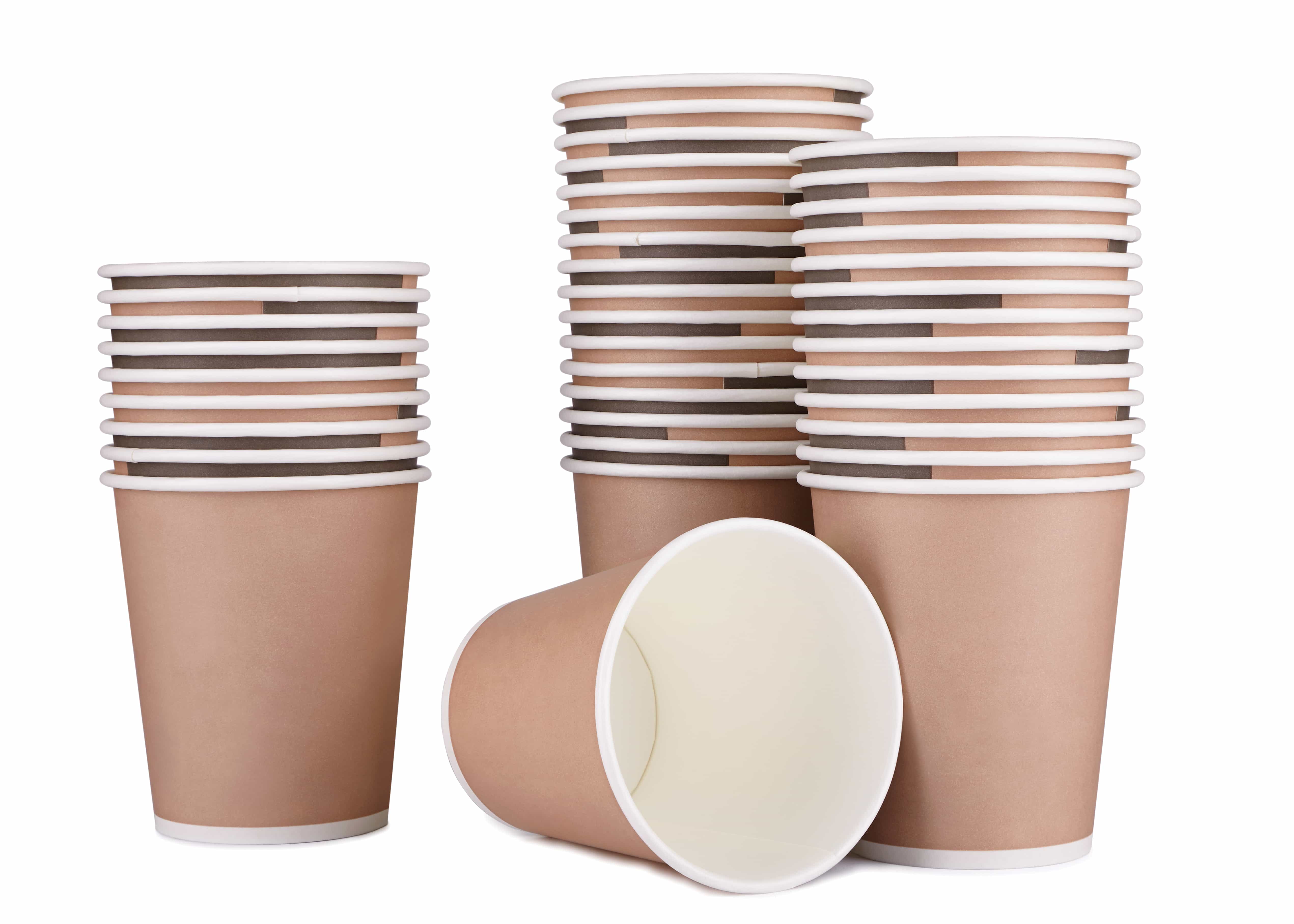 In a lot of coffeehouses, the trash has a dirty secret.

No matter how ecologically-minded the owners or clientele are, no matter how carefully the paper coffee cups are separated from the rest of the garbage, those cups are destined for a landfill.

According to CNN, some 50 billion paper cups are discarded in the United States each year. The vast majority of these are not recycled. The culprit is the interior polyethylene coating that keeps the liquid from leaking. This coating prevents recyclers of fiber-based packaging from processing the cups, because during the initial pulping, it breaks into flakes that clog filters. The problem is so pervasive that recycling facilities typically use optical sorters programmed to remove beverage cups from the waste stream and send them on their way to a landfill.

With the lack of paper cup recycling, some coffeehouses have opted to use compostable paper cups. Paper cups are available that are made with a compostable plastic barrier coating, usually plant-based, instead of polyethylene. But these have their own problems. They’re substantially more expensive than traditional paper cups coated with polyethylene. In addition, they won’t compost in a home composter. The only reliable way to make sure they’re actually composted is to use these cups in communities with municipal facilities that support industrial composting of packaging, which are few and far between.

Coffeehouses in most communities that serve coffee to-go in expensive compostable paper cups may have the best intentions to limit their impact on the environment, but are, in effect, throwing money out the door.

But a new interior coating material has the potential to render coffee and other beverage cups as recyclable as plain paper. Smart Planet Technologies has developed a new paper cup called the reCUP™, which uses a coating material that can be processed in any existing paper recycling equipment. Called EarthCoating®, it is made from 51% calcium carbonate and 49% polyethylene. In terms of both performance and price, it is no different from a standard all-polyethylene coating. But when it comes to recycling, there’s a huge difference.

To understand the brilliance of the reCUP solution, it’s important to review the paper recycling process. As with most packaging materials, a major challenge of paper recycling is the removal of foreign material as reliably and efficiently as possible. The first step in recycling waste paper is pulping, which breaks the paper down into a pulp of reusable fiber and undesirable substances, meaning pretty much everything besides the fiber. This includes dirt, grit, clay, product residue and the plastic interior coating, which breaks up into flakes. The pulp passes through coarse screens that let the fiber pass through, as well as the less-dense undesirable material, while rejecting material such as dirt and grit that is heavier than water.

The next step is filtering. The pulp passes through screens that allow the fiber through, as well as small particulates of undesirable material, while keeping out large particulates. The final step is centrifugal cleaning, which sorts the remaining pulp through spinning. The fiber, being lighter than water, is separated into pure pulp, while the heavier-than-water contaminants, even though they’re small particulates by this point, get spun out and rejected.

This process is highly problematic for conventional polyethylene coatings. The problem is that the coatings tend to break up into relatively large flakes that are lighter than water. Being light, they pass through the coarse pulping screens along with the fiber, and as large flakes, they clog the finer screens in the next step. This disrupts the filtering process to the point that recycling coated paper cups becomes nearly impossible, which is why many paper recyclers set their sorters to reject them automatically.

This coating can be used in any of the many packaging applications that feature coated paperboard, corrugated or other fiber-based material. So you can improve the recyclability of other coated paperboards in your coffeehouse as well, including coated paper liners and paperboard trays for food items. Your packaging distributor can provide reCUPs from paper cup manufacturers that have licensed the reCUP from Smart Planet Technologies.

“Our coating is applicable to any kind of plastic coating that’s being used on a package,” says Will Lorenzi, president of Smart Planet Technologies. “Our coating works just as well, looks the same, and costs the same.  The only difference is that the coating won’t interfere in the recycling, and therefore cups become a valuable material to collect, instead of sending to the landfill.”

The cups come in the standard coffee-cup sizes: 8, 10, 12, 16 and 20 ounces with matching lids. They are available in single and double-wall versions; the latter are recommended for use with cold beverages, because they cope better with outer-wall condensation. In both single and double-wall versions, these cups have the same potential for printing as a conventional cup. Indeed, for all practical purposes, they are indistinguishable from regular paper coffee cups; the only difference is that they can be recycled as easily as any other fiber-based packaging.

One of the U.S. customers for the reCUP is Kéan Coffee, with two locations in Southern California.  Kéan Coffee is owned by Martin Diedrich, founder of Diedrich Coffee and a prominent figure in the specialty coffee world. “At Kéan Coffee, we believe that businesses large and small bear a responsibility to support issues and model practices that promote greater well-being for the local community and the global community,” said Martin. “We are thrilled to introduce an innovation in paper cups that provides the recycling industry with a better cup to recycle.” 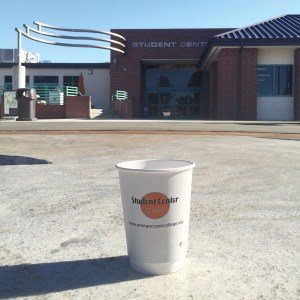 Other reCUP users include Ellefson Coffee Co., Jackson, Minn., owned by David Ellefson, of the rock band Megadeth; and Orange Coast College, a community college in Costa Mesa, Calif. The cafeteria at Orange Coast College serves coffee in reCUPs, and a student-run operation collects the cups and turns them over to a recycler.

The Orange Coast College setup points out a paradox about the practicalities of recycling reCUPs. In theory, they could be included in a load with any recyclable paper or fiber-based packaging, because they pass through the recycling process as easily as uncoated paper. But because virtually all recyclers reject paper beverage cups, for reCUPs to be recycled for now, they have to be collected as a segregated load and taken to a recycler who knows what they are and that they can be processed normally. Since the paper cups process as easily as uncoated paper, the paper cups are valuable to recycle, providing a new revenue stream for the recycling industry. As an example, Orange Coast College is funding a college scholarship with the profits that have come from recycling their reCUPs. 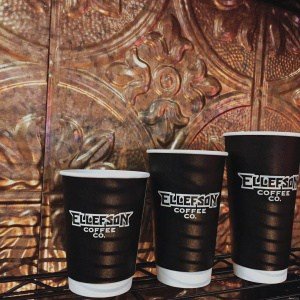 “The first step in solving the paper cup recycling problem is to provide the recycling industry with a paper cup worth recycling,” says Lorenzi.  Theoretically, if all paper coffee and other beverage cups were made with EarthCoating lining, recyclers could all be included in regular recycling streams. Lorenzi, of course, dreams of that day. He points out that most of the bleached-board cup stock in the United States is produced by only a handful of paper mill groups. “If the mills switched over, the whole [cup production] would switch over, and recyclers would know that every paper cup is potentially recyclable, profitably,” he says. “That’s where we’d like to get to someday. In the meantime, we’re going to have to collect the cups separately, but because they’re a valuable material to collect, it can offset the costs for the service.”

A new service called Replenysh offers a way to collect reCUPs on a wider scale. Replenysh, a startup based in Southern California, is a phone app for drivers of trucks that collect recyclable materials. It can tell them that a given location has a load of reCUPs ready for pickup and delivery to a participating paper recycler.

The United Kingdom is ahead of the U.S. when it comes to collecting coffee cups. Simply Cups, a partnership established in 2014 between Closed Loop Environmental Solutions and Simply Waste Solutions, exists to collect paper beverage cups from restaurants and other institutions and turn them into recycled fiber-based packaging material. Almost all the cups that Simply Cups collects have conventional plastic interior coatings; Simply Cups takes them to two British recycling facilities that have special equipment and processes designed to separate the coating. However, there are great advantages to a cup that can be processed more profitably through traditional processes.

Simply Cups recently entered a relationship with Smart Planet Technologies to collect reCUPs as separate loads, which can be resold more profitably since the reCUP can be processed with traditional recycling equipment.  One of Simply Cups’s members is Costa Coffee, the largest coffee chain in the UK. Costa is currently conducting a trial of reCUPs.

Recycling has a special resonance for coffeehouses—certain ones, at any rate. Many coffeehouses cater to a younger clientele that tends to be aware of ecological issues. This is one of the reasons behind the popularity of things like fair trade coffee. A coffeehouse that uses reCUPs and educates its customers about the advantages of doing so can score points with the ecologically conscious. Smart Planet Technologies is working with the Sustainable Packaging Coalition to obtain the optimal recyclability marks for packaging with EarthCoating within its How2Recycle [http://www.how2recycle.info] program. In addition, in areas where collection drivers use the Replenysh app, coffeehouses and other retailers will have the option of using Replenysh’s logo, adding to the green cachet.

Stay tuned for the April issue of Coffee Talk Magazine for an article about other packaging applications for EarthCoating linings that are relevant to coffeehouses.