“Those who cannot remember the past are condemned to repeat it.”
– George Santayana; Life of Reason

Long before there were Barista Championships, long before the Third Wave, long before small roasteries became ‘boutiques’ there was coffee, and the men and women who led our industry to where it is today. Many of the trendy current innovations were actually first developed before many of today’s trend leaders were born. It is a classic mistake to think that the past has no relevancy to the future.

CoffeeTalk is initiating a new print and video documentary series entitled “On the Shoulders of Giants – the American Coffee Experience” Watch for this series to come on-line in the next few months. Our first entry is…

Located in Moody, Alabama about 20 miles outside of Birmingham sets the Red Diamond Coffee, Tea, and Foodservice Company led by William Bowron, Jr., Chairman and CEO. Founded in 1906 by Bowron’s Great-Grandfather, the company has grown and innovated into one of the largest family-owned coffee companies in the United States. Here are some of Mr. Bowron’s comments.

“My great grandfather came from Virginia because Birmingham was a growing industrial center in the Deep South. He moved here and started Donovan Provision Company in 1906. He was selling bread, butter, and eggs. And he was also roasting coffee. He looked for a name for his coffee and he came up with Red Diamond, which is the rarest jewel that you can find in the world, and so he named his brand of coffee Red Diamond. The coffee did so well that several years later he discontinued selling provisions and simply became a coffee roaster. We added tea years later and then in full circle, we brought back the food service distribution side in the late ‘70’s. So, it’s kind of funny, this company tends to double back and we stayed true to our missions. But, if we drop something now, there is no telling when we might take advantage of it later.”

“Back then, all coffee roasters were local, and because you were roasting, you had to package it in paper bags which didn’t keep it fresh or you had to package it in steel cans or glass jars. We did all three. At one point, there were four roasters in the city of Birmingham. We have seen all of these mini roasters pop up for the coffee shops. Some people see that as a competition. I just see that as an expansion of our market, you know. And I loved it; I think it is great for the industry. I think that the more people that talk about coffee, the more people that are drinking coffee. It gives you an opportunity, if you stay positioned, to take advantage of that growth.”

On the commoditization of coffee…

“In the ‘50’s, in the grocery stores particularly, coffee became a commodity driven industry. If a person were buying a whole cart of groceries, the market would give you a pound of coffee free. So, we trained our consumer that coffee was a commodity to be given away. That coffee was not the beverage that it truly is which is one thoughtfully put together by a blender that knows how to blend it; that really treats it as the wonderful beverage that it is. And so, when you ignore all of that, like they did in the ‘50’s, it just took the heart out of the industry. Now if you look at Starbucks and where they are, I think that they have brought depth back into the industry. And so, now, the value of coffee has risen because of their approach. For those of us in the retail market or institutional market, that has had great benefits.” 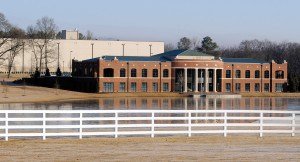 “Our approach is to make the finest products we can possibly make and produce them so that they are fresh on delivery with a higher level of service than is available throughout the industry, at a fair price. We pretty much have been loyal to that approach through 106 years. For each one of us, we were all small roasters at one point. So, we started in Alabama but Alabama has never been known to be an incredibly wealthy state, you know, and so you had to adjust to that. It just so happens that that is a great way to go to the market with a high profile product. And so, our value added approach of the add-in service and giving it to them at a fair price; is a pretty good deal.”

“We have grown and we’re now in about forty-four states, with different levels and layers of products. And it has been rewarding to see the growth that we have. Since we have been in this facility, our case count is improving about 25 percent a year. So, if I can double this company in every four years, we will be doing very well.”

“The coffee industry, just like the wine industry, has matured greatly in the last twenty years. We have become more sophisticated at what we do and we are all very careful about what we do. Being able to be privately held has its advantages – no one standing there looking at you about which return was that quarter versus the next quarter. You get a little longer return and that is not a bad thing. You know, we certainly had to do that when we moved out here.”

“A big step was investing in our Scolari Roaster. We have a great relationship with Dario Scolari. When we decided that we were going to move here, we had to decide what we would do about a roaster. So, we interviewed a number of different roasting companies, we flew to Italy, and I spent two and a half days riding around with Dario Scolari. I fell in love with his approach. I love what he did in terms of how he crafted his coffee. I love how he handles the coffee from the moment it arrives in the plant; that he gives it what he calls pharmaceutical accuracy. And so, he has given us a great leg up. He has been a great partner, he is always available. So, we have been thrilled with having Scolari as a partner here. I am completely confident we made the correct decision.”

“When you’re in the presence of people who are really great at what they do, every thing becomes simplified. You know because they have such a logical approach to it as you follow it through the discussion. One set builds to the next because that is the way they created the system. So, when you look at the fact that we were able to open this plant on time and under budget, that includes the buildings, that is really something. But to be able to get all the roasting for not only the coffee but also the tea production as well, shows you how effective their system is. And shows you the reason that he’s done so well. You know Starbucks was the first to use his technology in the United States, and then Café Rostello’s, as well as Caribou Coffee, and then Green Mountain has a plant in Knoxville. But, we are still the only plant in United States that does both coffee and tea using his technology.”

On Quality and the pricing of coffee…

“We still are susceptible to the sudden freeze in Brazil or you’re susceptible to a dock strike that stops supply for a short period of time. And that affects the future’s market, but the problem right now is that the futures market is not been driven by the industry. It has not been driven by the physical nature of the industry. It is being driven by the value of the dollar. It is not just the futures market; it is bread and the coffee that you are buying that are directly attributed to the weakness of the dollar. Although right now, the market has dropped some, I expect that as soon as they figure out what they are doing with the Euro, I think that this market’s going to go back up. For our company, we have done everything we can to buy the loads, and we have done everything we can to continue to maintain the good quality we started out with. You know, I would rather lose a little money and keep the quality than go the other way. We have always been known for our consistence in the cup and that is where we want to stay. And so, we have to make sure that we do the best we can now. We do raise the prices; we do also lower our prices although some clients claim they do not remember that as well, because we want to stay competitive in the market. We are trying to watch and trying to explain it to our customers. Now, we had to add in an added dimension of frustration in a relationship that does not need the habit. We do the best we can and we are like everybody else, everybody watches everybody’s price, everybody does the best they can. I would imagine it would be very difficult for the smaller guy who does not have a lot of room to store his coffee, does not have a lot of capital to purchase in advance.”

“You know, I think those things are really tough on the smaller guy. We are seeing some of these houses going out. For us it is difficult because we have contracts and we have to change what we are working with in the end. And you do not really want to jerk those prices around too long. So, it makes it an interesting day. I do all the buying of coffee and tea for this company. If it does not come out of this desk correctly then the rest of the stuff that we do does not matter. It is my responsibility to make sure we get it at the correct cost and get it at the correct quality. I handle that daily. What I find is that that is the biggest source of frustration. I know someone is talking about the fact they can get coffee when they go to Brazil. Well, that is fine. But when you imported into the United States with U.S. dollars you have a different problem.”

“We do not put Robusta in our Red Diamond, you know. All our coffees in the Red Diamond brand are Arabicas from Central America and Colombia. We have other lines that people want for private label to sell to people across the country. That is the flavor profile that they want, particularly if you get up into the upper Midwest, they like a little tartness to it. And that’s fine, we’ll do that. But in the Deep South, we do not want to do that.”

Look for more of this interview soon at www.coffeetalk.com