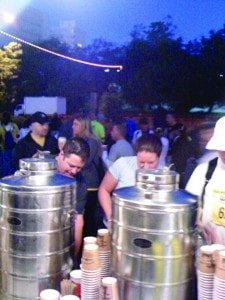 Next time you race up front to rescue a pair of panicked baristas serving 100 cups an hour consider the 2000-cups-per hour Texas-sized chuck wagon breakfasts, church services for 1000 and the annual Lance Armstrong bicycle race R.C. Beall has mastered since 1981.

Beall, who founded Montana Coffee Traders (and its Austin, Tex. twin), cut his teeth on Montana rodeos which remain among the more challenging venues for the Montana/Texas-based roaster who sells and services coffee brewing equipment and operates retail shops in Kalispell, Whitefish, Flathead and Columbia Falls Montana as well as the University of Texas, Austin.  www.coffeetraders.com
A Licensed Q-Grader, Beall doesn’t serve swill. He does good business in high-volume brewing, delivering 50 to 250 fresh-brewed gallons at a time. In some venues a shop can earn $35 per gallon retail which is what hotels charge (or $160 wholesale at $1 a cup delivered in 10-gallon containers).

Every shop should offer catered coffee in 96-oz. insulated cardboard take-away. The business is profitable at $18 for regular brew but what Beall has learned is the ability to scale up for events like the popular Austin City Limits concerts and city-wide extravaganzas.

Churches are a significant part of his customer base, says Paul Ballenger, founder of Nashville, Tenn.-based Coffee Makers Etc. In the half hour following services it is not unusual for churches to serve 500 to 1000 8-ounce cups from a dozen serving stations. www.coffeemakersetc.com

“Pastors know that it doesn’t look good to serve bad coffee,” he observes.

Ballenger has a lot to say in praise of the gear itself. Modern brewers are not the over-heating over-extracting percolators of yore.

You can serve good – even great coffee – in quantity if you have the right equipment and make preparations well in advance, says Beall, “You just have to get up well before dawn.”

“Our challenge as specialty roasters 30 years ago was the 10-cent bottomless cup at small town cafes,” he explains. “We were situated outside Glacier Park surrounded by 4 million acres of wilderness. Everything was far apart. We learned to do things long distance.”

That’s how he discovered the key to success, he explains. “It’s too much trouble to take brewing equipment to a rodeo and set it up. We brew double-strength coffee in a row of French presses and add hot water to taste,” he says.

Delivering 3,750 pounds of brewed coffee poses logistical problems that may require a forklift, two pickup trucks and pallets, but that’s often a lot easier than finding a supply of filtered water.
Ballenger, who distributes all the major brands, says that choosing the right equipment is critical… but only after you have scouted the site for water and electricity. In most instances one or both are lacking, he says.

“Power is one of the biggest considerations,” he says, “Serving that large a crowd comes down to heating lots of water very quickly.” Lining up 10 half-gallon coffee makers in a church hall is sure to blow a fuse. A 100-cup percolator takes an hour to warm up and brew.

A stainless steel three gallon electric coffee urn with a 10-gallon reservoir that can brew half batches costs under $2,500 new and 1.5 gallon portable servers are $175 each.

“Another thing – remember to limit the cup size to 8 oz.,” says Beall. Using a 12-oz. cup greatly increases your cost and the coffee gets cold while people are talking, leading to unnecessary waste.

They can always come back for a second cup, he says.

Beall’s crew can make 250 gallons at a time, occasionally returning to re-brew and refill each 5-gallon thermos with hot coffee.

The Lance Armstrong cancer prevention ride is more than an hour away. Beall prides himself in the superior coffee he donates to fuel the volunteers so vital to the event.

Hotels and local convention centers generally invest in their own equipment but retailers should consider pursuing concessions during college or high school football half-time rush or the lines forming for the seventh inning stretch on a fine October afternoon at the four diamond adult league ballpark.

Cowboy Days hosted by the City of Austin draws a crowd large enough to consume 4,000 cups in two and a half hours. “They have eight real cowboy chuck wagon cooks making cowboy coffee in big enamel kettles,” says Beall, but that is not nearly enough. “We have 250 gallons ready to go by 5 a.m. in 5-gallon thermos, and even then we have to re-brew.”