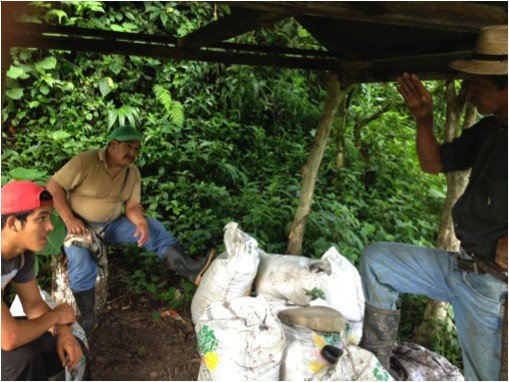 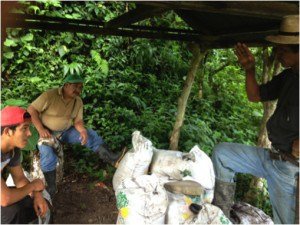 The coffee leaf-eating fungus, la roya, has invaded most of Central America. It has attacked Guatemala with a vengeance. In the Ixil region, the fair trade, organic coffee cooperative, Asociacion Chajulense, was devastated with a loss in coffee production of 75 percent. With less coffee to process, fewer women are needed to work in the processing plant. Families cannot afford to send their children to school. Medical care, which is already scarce, is out of the question. Hunger, already a vast problem, has deepened. The struggle to survive in the Ixil region has been exponentially multiplied.

While climate change may have exacerbated the spread of la roya to higher altitudes where it had never reached before, the devastation is more of a result from unhealthy soil that has been improperly replenished. Poor soil has yielded weak coffee plants extremely vulnerable to la roya. Healthy plants grown in healthy soil have fared far better in the face of this fungus. At a first glance, the solution might appear to be simple. However, the issue is not so much about what to do as it is about how to do it.

The history of the Ixil region has left farmers with a sense of victimization and a deep mistrust of outsiders, making it extremely difficult to explain new technologies and innovative farming techniques to these skeptical farmers. However, The Coffee Trust follows the principles of Camepseino a Campesino, which promotes lateral learning and imparts knowledge to farmers by sharing information from local farmer-to-local farmer. The Coffee Trust is applying these principles to attack la roya in five communities surrounding San Gaspar Chajul, specifically in Sotzil, Chel, la Perla, Ilom, and Saq’ siwan.

The project focuses on revitalizing and replenishing the soil with nutritious, organic compost. It includes the use of effective microorganisms to boost the impact of the organic compost. Widespread experimentation is used to support continued production of organic, high-quality varietals. Most importantly, The Coffee Trust adheres to the principles of Campesino a Campesino. A farmer will experience learning from someone just like him or her, which is accepted without defensiveness and/or a sense of mistrust. These individuals can now feel a burgeoning confidence and a sense of empowerment. A sense of, “Hey! She is just like me, and if she can do it, then so can I.” Instead of feeling helpless in the face of la roya and other serious social problems, farmers gain a sense of confidence and the understanding that they have the power and resources to solve their problems like, but not limited to, la roya.

The program is as much about transforming people as it is about transferring information.

Who Will Benefit from this Project?
Protected by the rough Cuchamatantes Mountains and a brutally cold, rainy climate, the Ixil people were relatively protected from the encroachment of Western civilization until the early 20th century. Since then, the deeply indigenous Ixil people have suffered from harsh poverty brought on by debilitating respiratory illnesses, water borne diseases, cash-cropping, and Guatemala’s brutal 36-year civil war. After the war, the region was flooded with well-intended, but poorly informed NGOs who saddled the Ixil people with give-away programs, creating a culture of dependency, eroding the inherent strength of the Iixl people, and leaving a sense of victimization and mistrust in their wake.

The Coffee Trust Roya Recovery Project will benefit 500 coffee farmers and their families from the fair trade, organic coffee association, Asociacion Chajulense, established during the civil war and providing a bastion of hope during a dark time in Guatemala’s history. The coffee cooperative has spawned numerous social projects, and now faces its greatest crisis since the war.

The project will benefit 3,000 people and is located in five remote communities surrounding San Gaspar Chajul, specifically in Sotzil, Chel, la Perla, Ilom, and Saq’ siwan in the Ixil region of Guatemala.

What You Can Do to Help
A contribution toward The Coffee Trust La Roya Recovery Project is always helpful. http://thecoffeetrust.org/la-roya/

However, even more helpful would be for roasters, retailers, and roaster/retailers to engage their customers in the effort.