This is a guest post by Wilkes Group which is a high profile UK company and specialise in different kinds of vending machines. Coffee Vending Machines by Wilkes Group Vending are helping many businesses to have an easy access to coffee.

With a predicted 5719 branded coffee shops in the United Kingdom by the end of 2013, it seems that the nation’s thirst of coffee has not yet abated.

To couple this figure, Tesco have just announced that they too will be leaving their mark on the £5bn UK market as they merge companies with Harris + Hoole, a British business run by two Australian siblings.

In a statement on the H + H blog last Thursday, the company confirmed that they had been indeed in talks with the shopping giant and have since found investment from them with a minority share in Harris + Hoole.

It is predicted that the site of the new business is to be found on Sycamore Road in Amersham and is to be marketed as a family-run artisanal establishment. At the moment, the Australian coffee entrepreneurs are said to be in discussion to buy up to fifteen other stores.

Despite a prospective sixteen stores by the end of the year, they have a long way to go to bite into a fair share of the coffee market: 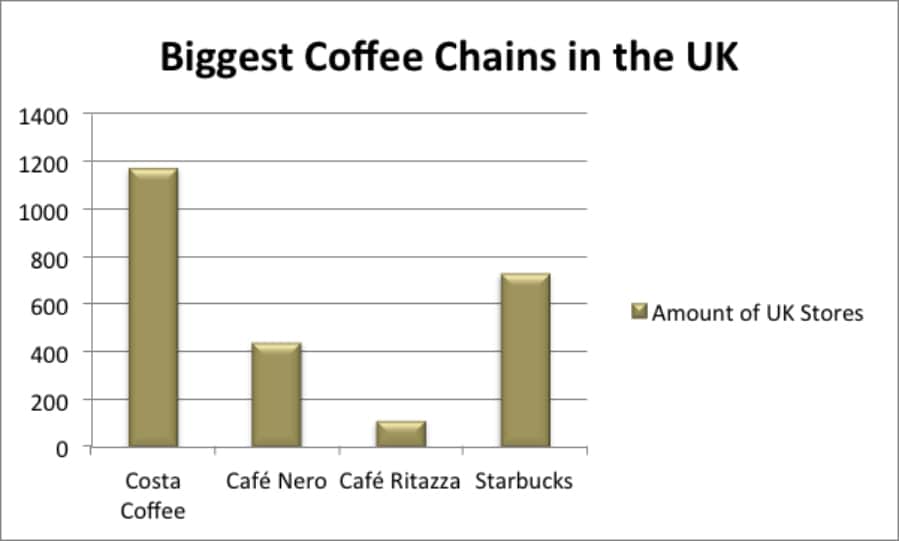 At the end of 2010, there were a total of 4645 branded coffee shops in the United Kingdom, roughly one every ten square miles of the country.

The biggest coffee boost of recent is of course the decision of Starbucks to introduce over 200 drive-thru coffee stores; generating jobs for up to 5,000 people. Despite delivering a loss of £47 million in 2009 and £34 million in 2010, the company is now appealing to the quick and easy morning rush that faces many bleary eyed motorists.

Despite Starbucks loss since the beginning of the recession, its biggest rival, Costa Coffee received an 8% increase in growth over 2011. In a statement in 2010, chief executive of Starbucks, Howard Stultz,  said:

“The place that concerns us most is western Europe and, specifically, the UK. The UK is in a spiral.”

Despite all the doom and gloom, these figures are of course now more than a second old as coffee drinkers can now relax with their favourite hot beverage as Starbucks released record third quarter results for 2012; showing a global growth of 13% to $3.3 billion – almost two thirds of the entire UK market.

Interestingly, Britain’s love of the hot stuff isn’t as contemporary as some may presume. In fact the first coffeehouse opened in London way back on 1651, almost 320 years before the first Starbucks store opened in Seattle.

Perhaps more interesting in the history of the coffee shop, is that in 1675 they were very nearly banned in their entirety throughout the Kingdom. Indeed, coffee houses made King Charles II very nervous indeed, and considered them hothouses for political chatting and dissent. On December 29th 1675 he issued a proclamation stating:

“Whereas it is most apparent, that the Multitude of Coffee-Houses of late years set up and kept within the Kingdom, the Dominion of Wales, and the Town of Berwick on Tweed, and the great resort of Idle and disaffected persons to them, have produced very evil and dangerous effects…”

Unsurprisingly, the yearn for the brown beverage already had its claws on the everyday Brit, and the proclamation was withdrawn on the 8th of January 1676.

Today however there seems to be no limit for coffee; alongside their drive-thru coffee stores, Starbucks have announced the offering of alcohol in some US states, bringing their coffee stores in line with independent European counterparts.

With 11,000 stores in the US alone, compared to 7,000 in all other countries, over the next year, the chain plans to open 1,200 stores over the next twelve months; around three stores a day, with only half of them in the United States.

Considering that, the question must then be asked as to how this gargantuan leap will affect companies like Harris + Hoole, who instead may not have the shoulders of other giants to stand on; where will their lifeline come from?