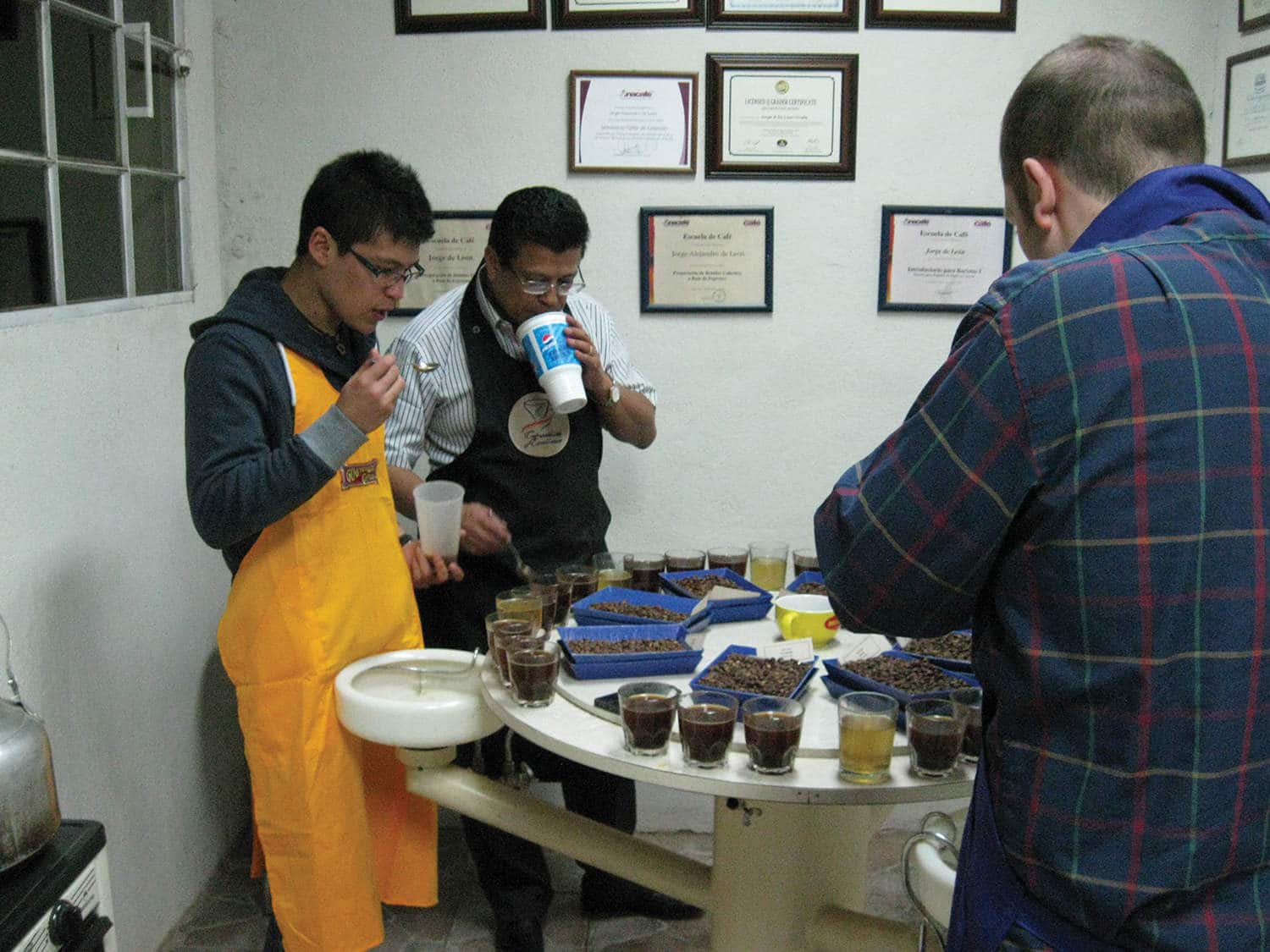 Why get into the coffee business?  Relationships.  Seeking out like-minded people all over the coffee growing world and returning home with their hard work to share is what separates coffee as a business from coffee as a lifestyle. My colleague Brandon Bir and I were fortunate to find ourselves in Guatemala earlier this year amongst the finest of coffee and people.

We drop out of the sky and into the land of eternal spring. The weather in Guatemala, as advertised, is going to make our search that more enjoyable. Brandon and I are here in search of that moment – hard to define but easy to spot once it happens – when we discover a coffee we just have to have. After cupping coffee together daily, Brandon and I know what we’re looking for.

At the airport gate, we’re met by a friend who has set aside a few days to guide us. He is no stranger to this journey; in fact, he has dedicated his life to it. Once the youngest Q-grader in the world, Jorge Ovalle now spends most of his time looking for great coffee. We have arrived with the same purpose.

We quickly escape the airport and embark on our quest. We are headed to Antigua, a growing region of great tradition and renown. Some of the world’s most eloquent cups of coffee are born in Antigua every year, but this year’s harvest has come under attack. The region, like much of Central America, has fallen prey to Roya, or coffee rust, caused by the fungus hemileia vastatrix. Even at drive-by speeds the effect is obvious. The once-lush green foliage usually adorning the hillsides has been replaced by spindly twigs, mere skeletons of their former grandeur. Some hold on to their dignity despite the plague and bravely manage clusters of bright crimson berries. The extent of the damage varies from one farm to another, as each utilizes its own practices. Of course, the most vulnerable farmer is the organic farmer, who cannot use chemical fungicides to combat the plague.

Jorge takes us to Maria del Pintado, the only Antigua coffee farm that is certified organic. Standing in the shadows of a majestic 400-year-old hacienda, which once housed Mother Teresa for a visit, we are witness to a near-apocalyptic scene of denuded coffee trees. While Mad Max may have looked around, dusted himself off and moved on, the owner and managers here have shown more backbone. Within a few weeks, they must decide whether or not they are going to pull up all the plants and start over. If they do, there will be no yields for years to come. The other option is the use of non-organic fertilizers. After meeting Belarmino, the manager, I don’t believe that this was ever a consideration. While touring the grounds we learn of his fierce dedication to this land and the coffee on it. Every aspect of processing El Pintado coffee takes place on the farm and under Belamino’s oversight. “This was to be the year,” Belarmino told us, “But for the rust.”  The yield for this year’s harvest can’t be ignored. Only 60 bags.

When the meeting of minds takes place and the fate of El Pintado is determined, a key figure in the decision will be Jorge’s father, Jorge De Leon, Sr. He started in coffee in 1981 at age 17. He got a job cleaning the cupping labs and organizing the results. He would blind cup the samples himself and compare his notes with cuppers’ records while no one was watching. Jorge cleaned for years before he was offered the additional duties of roasting the samples. After work, he would go to the library and learn what he could about growing and processing coffee. He has since worked as a cupper for farms and labs throughout Guatemala, advising on all aspects of quality control: farming, milling, and cupping. In 2011 he won Guatemala’s national cupping competition and represented Guatemala in Amsterdam at the world cupping competition where he was a finalist. His work ethic remains unchanged 30 years later. Next to his house is his roasting and cupping lab. After visiting farms all day with Jorge Jr. we join Jorge Sr. at his house each night. We start cupping again between 8 and 9 p.m. Sometime after midnight Brandon and I have to call it a night. Our nerves are on overdrive from a steady diet of caffeine and we have new farms to see and new coffees to try first thing in the morning. You just can’t out-cup the De Leons.

It was in the De Leons’ private coffee lab where we had that moment for the first time in Guatemala. Brandon and I both know this is what we are looking for. It was a blend that Jorge Jr. had put together using beans from local small-lot farms. We dubbed this blend “Jorge’s Pick.” Jorge had already taken us to visit many of the farms where the coffee was grown. Unfortunately, none of them would be able to help export the unusual blend, and the De Leons don’t have an export license. Still, we had to have this coffee.

The next day we cupped some good coffees and a few that stood out when that moment hit us again. It was the quintessential Antigua, balanced and soft, rich with chocolate notes but still no real spikes. It is exactly what I want in an Antigua, and we have to have some of this too. As it turns out, this coffee is the product of El Pintado. But with such a small yield this year and regular customers in Korea, would there be any left for us?  Obtaining the coffee would involve calling the owner, who was out of the country at the time. She made herself available for us and agreed to set aside some bags of coffee. We also were fortunate to make arrangements for exporting the two types of coffee.  We have recently learned that the coffee trees of El Pintado will be spared.  I hope we are able to join them next harvest, see their progress and shake hands again.

Coffee is a business of relationships. The trick, when it comes down to it, is do you trust who you’re doing business with?  We traveled to Guatemala to find great coffee but more importantly, strengthen the relationships with the people behind the coffee.