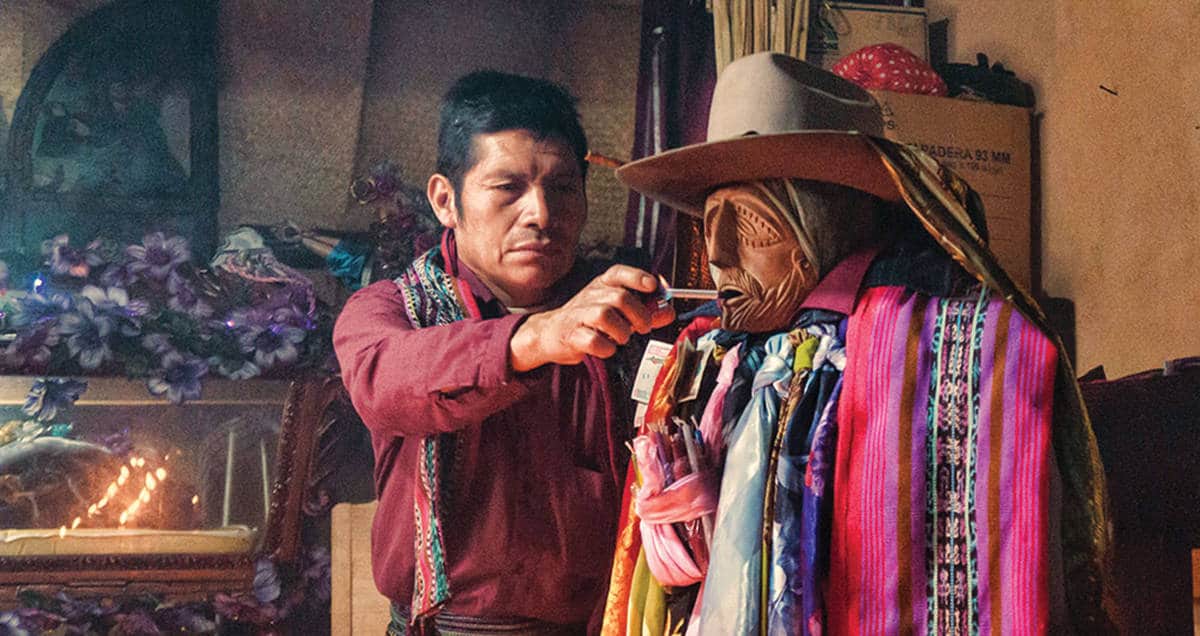 Guatemala – A Visit With a Saint

On an early visit to Guatemala, I was asked to be an election observer on behalf of several indigenous groups. To do so successfully, I was told, I had to visit a very important person. Maximon is the syncretized saint who meshes the Mayan god Mam with the Catholic Saint Simon. His name combines “Simon” with max, the Mayan word for sacred tobacco. Tobacco is used throughout the indigenous world to open a channel between earthly existence and the realm of the spirits. Syncretization is a strange accommodation. It allows colonized peoples to continue their own religious beliefs and practices by wrapping them in the cloak of the colonizer’s religion. At the same time, it affords the colonizer a foothold in the spirit of the community. In Brazil the lusty, busty Yemanja, goddess of the rivers and seas, morphs into the Virgin Mary in many churches. In Wiccan Europe, syncretization gave the nascent Church a chance to overlay its festivals of Christmas and Easter onto earlier ritual celebrations of seasonal change. 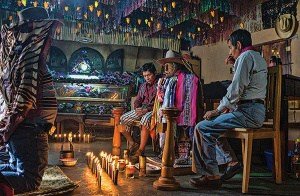 We approached the house of Andres, an ak-jun (priest) of Cofradia Santa Cruz (the Brotherhood of the Holy Cross). Since the sixteenth century, the brotherhood (it’s all men) has been in charge of caring for the effigy of Maximon. The house was shrouded in strings of Christmas lights (the intermittent blinking ones), Guatemalan flags, three crucifixes, and little wooden Day of the Dead skeletons. I knew that this was a stage set for getting visitors into the right headspace, but it looked so damned tacky.

I entered the house. Andres and three other ak-jun sat inside. The top half of the room was lost in an acrid fog of cigar smoke and incense. Andres stood and walked toward me, cutting a swirling pattern through the smoke. He greeted me with a firm handshake.

“Have you come to pay respect to the Old Man and seek his help in the election?”

I shook the smoke and judgment from my head. “Yes.”

“You must know the Mam to see into our souls if you wish to help the people here. Maximon is the spiritual heartbeat of our people.”

Jimenez, probably the oldest man, offered me a glass of rum to “cleanse” me for the visit. I usually hate the stuff, but I wanted to respect the ritual. Andres stood up and went to the far end of the room. He and another man pulled a rope attached to the ceiling and down came a folding ladder.

“Come on. The Mam is waiting for you.”

Andres went ahead, then I climbed up. The low attic of the house was filled with religious icons, statues and paintings. Candles burned in the four corners of the hot, musty room. Andres took the nearest candle and crawled across the room. As my eyes became used to the shadows and half-light, I saw that Andres was kneeling and chanting next to a prostrate figure. He beckoned me closer.

“Maximon welcomes you,” he intoned. Andres poured another glass of rum for me. I politely declined, telling Andres that I would rather sit respectfully than throw up on a deity.

“That’s okay,” Andres said thoughtfully. “You come to the Old Man with respect. That’s the most important thing. Come closer. He won’t bite you.”

I crawled to the left of the supine saint. Maximon lay there, his wooden face wearing a slight grin that seemed to move in the candle flicker. A big cigar stuck out of his mouth at a jaunty angle. The Mam wore a cowboy hat—no, he wore five cowboy hats. Andres drank more rum, his prayers ratcheting up in intensity. He stroked the Mam’s face imploringly. I saw Andres’s shoulders jerk as he sobbed quietly. I noticed with a start that Maximon was only about three and a half feet tall. He had on a traditional Atiteco red shirt, and his neck and shoulders were covered with woven scarves and modern neckties. Out of this fabric sprawl leapt a Mickey Mouse tie, with the World’s Most Famous Rodent and his sidekick Goofy smiling upward. On his legs, Maximon sported a new pair of blue jeans and a little pair of cowboy boots.

“Dean, the Mam wants you to talk to him now. Tell him what you need. Get closer so he can hear you. He’s old and doesn’t hear so good anymore.” I leaned forward. “Closer,” implored Andres. My face was inches from that cigar. Maximon, Andres, Mickey, and Goofy waited.

I asked Maximon about the coffee harvest: would he ensure a good one? Then I moved on to the big issue—the election. Is my role merely to observe? Is my presence heartening to some who might otherwise be afraid? Is there something more proactive I could be doing? Whether I was talking to him or myself didn’t matter; it felt good to process my own concerns. I really opened up to the Mam, and I waited. I looked expectantly at the ancient spirit. But all I saw before me was a Pinocchio-sized wooden dummy with funny clothes and too many hats.

“How was your visit?” Andres asked at the bottom of the ladder.

“I really appreciate the time Maximon gave me and I am honored to have met him. But to be honest with you, he didn’t really speak to me.”

Andres laughed. “What were you expecting? The Mam would jump up and dance? I told you, he’s old. He doesn’t do that very often. But he does what spirits do. He takes your prayers up into heaven and finds ways to answer them. So whatever you prayed for, know that the Old Man working on it right now. Of course, you have to be sincere, make your prayer and let it go. Whether or not it is answered is up to him. But I tell you this, if you don’t ask for the help of the spirits your prayers can never be answered. You know what I mean?”

Want to read the full issue? Read it now on Issuu.