Fritz Lang’s Metropolis depicted a future where machines and industry were filling the landscape and bringing our world into the future but at the cost of human fuel. In this dystopic portrayal of the future, they were still using humans to drive the engine of the city. Humans were the ones shoveling the coal to the feed beast of an industry. Fritz had the mechanized part right but seemed to overestimate our need for people in manual and repetitive positions. Today we are seeing the age of the machine work its way into cafes and coffee shops in the form of super-automatic espresso machines, robotic arms autonomously serving espresso drinks and robotic servers carting around trays of food to customers’ tables.

Humans are growing further and further from the process of making the things we love. Sardonic future-phobes may cling to Elon Musk’s prophecy of Universal Income as a sign that our society may be headed more accurately in the direction of Pixar’s Wally. The cute computer animation tells the story of a robot in a world of lethargic, docile, and ineffective humans that have no need for physical work. The people only fill their time with the sensory pleasures of eating and file away the hours with entertainment and sleep. This neatly places people in the position of pure consumers with no true purpose.

Watching a robotic arm prepare my Americano at SFO airport I was entertained and amazed by the precisions of movement and the theater of the novel it provided. When the robot was done serving my drink it waved at me and proceeded to dance in an arm pumping, raise the roof, type movement which made me smile.

This is far beyond the simple on-demand, auto-adjusting grinder that self-tamps and extracts espresso within the parameters of temperature, pressure, and rate-of-pour; this arm was the barista. The Café X arm picked up the cup, swirled the cup with the liquid inside, and served the cup while entertaining the customer all at the same time.

My first job in coffee was as a barista so I have always considered myself a barista first. I loved the process of controlling the grind, dose, tamp, and ROP while frothing perfect silky milk. It was a point of pride, and I transferred that love and self-worth into every cup I served. One day, in 2005 the owners of the café I worked in brought a Marzocco Swift into the shop. This grinder would grind a dose on demand and then tamp it for you (well before the Puqpress). I hated it! Did this grinder think it was better than me? How could a machine take away my power and control over the flavor of that espresso? I felt deflated and like a fraud. How could I look my customers in the eye while the Swift tamped their espresso?

Eventually, I got over it, but I never forgot. Later, working at La Colombe on a pair of vintage FAEMA E61 espresso machines from 1961 I realized my worth again as a Swift would never have worked in that application. Water flowed differently from each of the four groups of the beautiful antique I played like an heirloom cello. I had to tamp at half pressure for the group on the far left while for the group on the far right I had to tamp at full pressure. Groups one and two were for espresso as they poured the best and most consistently while groups three and four were for lattes and cappuccinos. This gave me some reassurance though, later working in wholesale, I would realize that not everyone paid as close attention to the subtleties of the water flow of each group or the grind setting or consistent tamp pressure. The more removed from the barista role I was and the more baristas I interacted with, the more I noticed the pitfalls and inconsistencies in espresso delivery.

Speaking with Steven Goldman of Truebird Technologies, my sentiment was echoed. “Super-autos, if cleaned and calibrated properly will consistently make better coffee than a traditional espresso machine.” This is an unfortunate reality if you look at the full spectrum of coffee service in the world. Not every café is an Onyx Coffee Lab or a La Colombe. The majority are delis, restaurants, ice cream shops, and grocery stores.

Truebird is a technology company based in Brooklyn, New York with a fully automated café experience in a box. The unit integrates AI technology with a customized Eversys super-auto inside. One of the main differences between the Truebird and the Café X robotic arm is that Truebird uses magnets to move the cup. Rather than the slightly intimidating Terminator arm swinging around to make your coffee you are faced with a Michel Gondry type of whimsical dance of magnets animating your morning coffee.

The Truebird unit is smaller and less dramatic than the Café X robot arm. Each of these new automated coffee booths still relies on conventional espresso machine manufacturing companies. Eversys has already started working with some of these innovative companies.
I recall a speech that Heather Perry gave at the New York Coffee Festival in 2018 where she talked about the future of automation in coffee. She described the role of the barista as evolving from a crafts person to more of a knowledgeable customer service coffee expert like a sommelier in wine. So, I thought, why aren’t there sommelier robots? Why are these tech companies picking on baristas? Turns out, there are robot sommeliers on the market already as well. If you’re wealthy, you can even get one for your home. The robotic sommelier can provide pairing suggestions or wine selections based on your flavor preferences. Then it can pull out the climate control stored wine, open the bottle and pour it for you.

Demetria is an AI tech company that developed an infrared scanning device that combines AI tech to determine the flavor characteristics of a green or roasted coffee by reading its chemical composition. This could easily be combined into one of these robotic cafes and do the complete job of the barista.

A robot will also never truly recognize you or share its story or joy. A robot will never surprise you with a drink you didn’t order but secretly always wanted to try. A robot cannot pass energy or love to you by making something with the care that was meant just for you.

Mr. Goldman at Truebird makes a point of saying, “there will always be a place for a barista experience in a coffee shop,” as he admits to cherishing his weekend ritual of engaging with a barista while getting a handmade beverage. “It’s just not for every place and time,” he finishes.
The greatest applications of these automated units are in transportation hubs, hospitals, offices, and hotels. Places that are difficult to operate in, don’t justify the labor expense or don’t have space for a full café build.

Some of the greatest benefits are environmental. Brewing and serving everything with calculated precision reduces waste heavily; waste of water, milk, and electricity. Milk waste alone is a huge benefit both environmentally and financially to the shop’s owner. The University of Edinburgh estimates that one in six pints of milk produced is thrown away or lost. Coffee shops are great perpetrators of this waste primarily when it comes to using the wrong size pitcher for the drink or making a pour quality drink that needs to be remade. Not to mention the gallons and gallons of milk poured down the drain to train our baristas. These unmanned operations also bring large financial benefits that affect some of the highest-cost line items in any coffee shop budget. The high-cost items include labor, rent, food cost, and energy. Labor is the obvious one. Rent is reduced because the square footage is reduced tremendously with efficient use of space and mechanical integration of production. Food cost is reduced with wastage reduced and energy costs go down as all these electronics are customized to run with more efficient energy use.

As a barista, I am a little saddened by the idea that my beloved position could be replaced. As a business owner, I am encouraged to see a solution that can make high-cost and difficult locations a possibility for a profitable business. As an environmentalist, I am excited by the opportunity to reduce waste yet trepidatious of the cost to our culture. Must we solve all the problems we created during the Industrial Revolution with more industry? Is the coffee itself the important part or is it that human interaction we get in our coffee shops?

I’m sure there is a middle ground here, seeing a robot in a hospital or airport makes sense to me. All things have their appropriate applications.
Let this serve as a call to the baristas of the world to be as human as possible; connect with your customers, smile, and engage. Baristas, taste the espresso when dialing in, and listen for what your customers like. Take the time to make the drink right and be mindful of your waste. Baristas, bring your charm and energy, and stories to the table and start customers’ day off right with a good feeling. Being human is the only way to be irreplaceable. 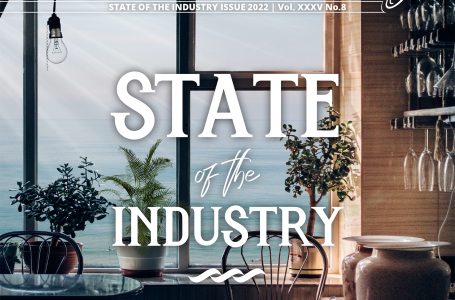 State of the Industry 2023 Issue