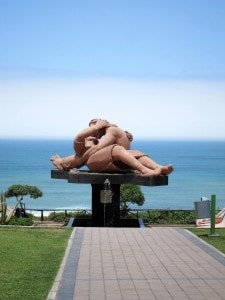 Peru is the sixth largest producer of Arabica coffees in the world! Interestingly, that fact comes as a surprise to many in the specialty coffee industry. In order to change the perception of Peruvian coffees in the consuming world, the Junta Nacional del Café (the Peruvian Coffee Association), the Peru Ministry of Agriculture, and PromPeru (a government agency tasked with raising international awareness of all things Peru), have joined forces to raise their coffee’s market cachet.

As part of this effort, this year saw the introduction of the first Expo Café in Peru. For the first time Peruvian growers and suppliers met to share information, inform growers of trends, and welcome international participants. CoffeeTalk was fortunate to be part of the international press contingent to attend the Expo. This successful first-time event also coincided with the seventh Concurso Nacional de Cafes de Calidad final – the finals of the national coffee quality competition – and the first judged by international cuppers and staged following international cupping protocols.

Despite their successful steps into international notice, the Peruvian Coffee Association and the Ministry of Agriculture face a daunting task. Many obstacles need to be overcome while journeying toward Peru being part of the international pantheon of world-class coffee producing countries. To their credit, the leaders of the Peruvian coffee industry are aware of the challenges they face and are taking the appropriate steps.

Coffee in Peru is grown on the Eastern slope of the Andes within the Amazonian watershed. Individual farmers and rural cooperatives are responsible for all aspects of wet milling and drying to parchment at 12-14% moisture. As in most coffee growing areas, the average farm size is less than 2 hectares. Because of lack of transportation infrastructure, the farmers must rely on a system of middlemen to get their products to the dry mills.

Most of Peru’s dry mills are centered close to the seaports on the Pacific coast, hundreds of miles from the farms and across the spine of the Andes Mountains. These massive industrial mills typically aggregate all the coffees they receive into “Peruvian coffee.” They only segregate certified coffees.

The system is loaded with opportunities to affect the quality of the coffee negatively. In order to support specialty coffees, the Peruvians will have to tighten their supply chain and bring more differentiation into their processing. For example, the density sorters in one of their largest dry mill had only three paddles sorting “domestic consumption,” poor quality (instant), and good quality (commodity).
One of the limiting elements of Peruvian export coffee is grading. Peru only grades their coffees for export into two grades – essentially “Okay” and “Better.” As a result, the protocols they impose for defect grading of good coffee would not pass muster in the Specialty market.

In fairness, this does not limit importers from going to the source and working with co-ops to find extraordinary coffees much as Sustainable Harvest and Equal Exchange do, but this system does discourage typical large importers to specialty.
But these obstacles and others are surmountable and have been faced by many emergent coffee countries. With diligence and determination as demonstrated through the Expo, Peru soon will be an essential element of every roaster’s coffee program.

[three_fifth first]
Part of the evidence of how little we know about Peru is shown in tourist reactions to Lima, the capital city. Peru depends on tourism but most tourists travel directly to Cuzco and then up to Machu Picchu. Lima, Peru is a vital and metropolitan city. Residence to over 10 million people, it is the center of banking and commerce on the Equatorial West coast of South America.

Historically, it has been a major factor in the establishment of Spanish hegemony over Central and South America. At one time, it was the Western Hemisphere seat of the Spanish Kingdom – the Viceroy (the Spanish King’s voice in the Spanish colonies) governed from Lima making that city the center of Spain’s colonial universe. As a result, the city also became the center of the Catholic churches presence in the colonies. Many historical buildings from the 15th and 16th centuries remain as sentinels to the country’s colonial splendor, and its shame.

Some, but very few, monuments from Peru’s pre-Colombian past remain in the city. The government and UNESCO are actively restoring many of these heralds of Peru’s 10,000 year history of continuous settlement.

In many ways, Peru’s relative isolation over the past 150 years has led to a truly unique culture. As Spain lost its colonial and maritime influence in the Western Hemisphere, so waned the global influence of the western nations of South America. The result of this period of self-sufficiency established the full integration of many of Peru’s cultural and ethnic diversity into a fully interwoven piece.

As one who likes food and food preparation almost as much as I like coffee, the cuisine of Peru was extraordinary. Peruvian food, which is embraced by all Peruvians, is a mixture of ancient and modern traditions using food products that can only be found in Peru.
Incorporating and assimilating every culture that has come to its shores, Lima boasts restaurants that match and surpass many 5-stars in the US and Europe. Fusions of methods using foods once eaten by the Incan civilization, rare and unusual fruits, root vegetables, and grains are incorporated into anything from fresh seafood to Chinese stir-fry.

Peru, and the Peruvian coffee producers, are poised on the brink of emerging into international greatness. There challenges are offset by the energy and enthusiasm of the Peruvians themselves.[/three_fifth] 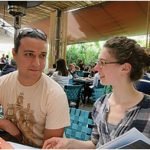 The first internationally judged Peruvian coffee competition, the VII Concurso Nacional de Cafes de Calidad, was taking place concurrently with the Expo Café Del Peru. Hosted by the Ministry of Agriculture and the Peruvian Coffee Association and taking place in the SCAA protocol lab at Bisetti, the upscale café and roastery located in the Barranca district of Lima.

Café Bisetti, which has been profiled in a previous issue of CoffeeTalk is the masterpiece of David and Hanna Bisetti, who also own the Arabica Café in Lima. 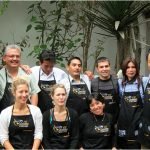 The judging panel was composed of six Peruvian judges and six international trained judges from the US, Europe, the UK, and Japan. The winning coffee, with a score of 88.75 overall, was from Benjamin Peralta Surco of the CECOVASA cooperative in the province of Puno. His coffee was described as ‘perfect’ and ‘fleshy’ by many of the judges.

Second, third, and fourth place were tied with a score of 86.16. All these coffees were grown above 1700 meters.