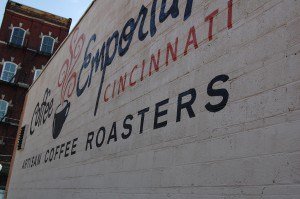 Kerri and I met up a couple of months ago at the International Women in Coffee Alliance (IWCA) conference in El Salvador. Kerri asked me to write an article about my experiences with sustainability. I thought sure! No problem! How the heck hard could that be? I work and live in a very sustainable fashion everyday!!

My wife and I own a string of coffee shops in Cincinnati, Ohio, The Coffee Emporium (6 in January). We brought 4 of our employees with us to El Salvador. We wanted them to see origin and have a better understanding of the amount of work that truly goes into our daily cup. My roaster and I actually comprised 40% of the men at this conference.

Well, that was a couple of months ago. But, then I sat down in front of my computer and started to write about the fact that we, as company, ARE composting all of our coffee grounds. We ARE buying and using biodegradable cups and flat ware. Our everyday one-half and one pound bags ARE compostable and biodegradable. ALL of our coffee chaff from the roaster goes into local gardens. We USE milk that is produced less than 100 miles from here by cows with actual names and don’t go by 55-20897 or whatever cows without names go by nowadays.

But, then I thought. So what? Everybody – Most everybody – A lot – A few – Some, do this exact same thing. Does it just sound like a crummy commercial to say that we are sustainable because we are choosing to run a business using “green” parameters? So, I moped around for a few days thinking about sustainability.

And then it hit me.

On Thanksgiving, I was working the floor at one of our locations in an area of Cincinnati called Over the Rhine.

Over the Rhine was a heavily German populated area of Cincinnati for most of the 19th century. It had a lot of breweries. German newspapers, German bars, and German restaurants up until the 1920’s or so. Then the people started moving out of the urban areas and moved to the suburbs.

Over the Rhine, like most inner city areas fell on hard times for the next 80 years or so.

Then a very popular local musician was murdered. In an unrelated case the police shot down an unarmed man. Riots ripped through the area and the entire city was under curfew for a week.

We opened our cafe and roastery in 2001, a year after a series of riots wracked our city.

We already had a successful location in a neighborhood so when we told people that we were opening a second location in the riot torn area of Over the Rhine they thought we were a little – no – really crazy. But, my wife and I could see the potential that some other people also saw.

We opened our doors in April and people started to come in. We didn’t have any big signs and for awhile we were thinking that the customers we had during the afternoon were the same exact ones we saw that morning at our neighborhood location. We were open m-f 7-4, Saturday until 2, no Sunday hours, and no holiday hours. Now, after 10 years we are open until 8:00pm everyday, including Sundays and holidays. If we were closed we would have a riot! (In a good way)

But, on Thanksgiving, a customer was talking to one of my employees. He told her it was a shame that she had to work on Thanksgiving and that she should have taken the day off.

Without even pausing she told him that she has quite a few friends that at this moment they have everyday off and are unfortunately not gainfully employed. She said how she actually enjoyed working and that some of her friends were her co-workers. She said how another Coffee Emporium employee who got off work a few hours ago was making her Thanksgiving dinner right now. Turns out at her dinner she was going to have no less than three other CE employees.

So, where is this sustainability thing that we are supposed to be talking about?

Sure, espresso machines break down during the morning rush. Coffee roaster’s motors will stop and cause a batch of amazing coffee to scorch and be ruined. Employees will call/text in being sick six minutes before their shift starts. But, would I trade all of that for a million dollars?

Tony Tausch has been in the coffee business for 16 years with my wife Eileen. We are roasters, retailers, wholesalers, caterers, coffee snobs (not necessarily in that order) in Cincinnati, Ohio.