Café de Costa Rica is grown in a “green” country that protects 21% of its territory under modalities such as national parks and private reserves. Blessed by nature, the country is home to 5% of all the flora and fauna in the world in less than 52 thousand square kilometers. Ecosystems have rewarded it with excellent soils and the ideal climate to grow coffee.

Costa Rica is the only country where, by Executive Decree, only the Arabica species may be grown. Privileged lands include soils of volcanic origin, rich in minerals and organic matter, micro-climates and excellent altitudes that growers have tapped to grow the best coffee in the world.

More than 70% of the coffee beans are grown in mountainous areas, in some cases even up to 1,900 meters above sea level. Grower efforts and scientific advances have led to develop agricultural practices committed to environmental preservation.

Our country has developed and consolidated a social, economic and environmental sustainability model to inherit to future generations of coffee growers. In the environmental field, Café de Costa Rica bet several decades on policies that triggered climate change mitigation and adaptation actions. The idea currently is to have a limited carbon-emissions economy.

The coffee operation in Costa Rica is propped by 7 laws and 4 decrees that protect water resources, forests and biodiversity, controlling waste water disposal, protecting the environment, soil, and wildlife.

In order to operate, all coffee processing plants (ripe coffee processors) must have permits issued by the Ministry of Health certifying adequate wastewater and byproduct treatment, where the latter is issued as fertilizer and as fuel to dry coffee. Coffee processors have invested over $120 million in technologies to reduce water consumption from 4 m³ to less than 0.5 m³ per hundredweight processed.

Once the viability was proven, the Ministry approved a wastewater treatment system which is currently used in half of the processing plants: spraying over stargrass: cynodon nelmfluensis // drying bed, preventing water from reaching rivers and streams.

Areas of research include the use of coffee pulp to generate thermal power and approach energy self-sufficiency. These practices are of particular relevance for the preservation of woody species commonly used to dry coffee.

Carbon sequestration is no doubt Costa Rica´s biggest advantage. Growing coffee among trees favors the filtration of water down into the water table, protects the soil cover since there is less runoff, and captures more greenhouse gases. Sowing practices have a more positive impact than other methods that remove soil and produce emissions. Coffee can be grown in wooded areas and, vice versa, trees can be grown in coffee plantations. Biodiversity is the big winner.

Fertilization has a very positive impact on productivity, but is also one of the highest production costs and a major source of emissions. Through its Soil Mapping Program, the Instituto del Café de Costa Rica has examined 100% of the coffee lands to optimize the use of fertilizers, avoid unnecessary doses, and bring economic and social benefits to growers. A balance between nitrogen-based fertilizers and sustainable alternatives like organic matter is the key to success.

Café de Costa Rica began a pilot plan for the Payment of Environmental Services to growers in three main regions whose plantations follow agro-forestry practices. Growers sign a contract to receive up to $150 per hectare per year over five years for their contribution to the environmental sustainability of Café de Costa Rica.

In exchange for this payment, coffee plantations are kept as a sort of secondary forest, sequestering greenhouse gases, serving as biological corridors, preserving soils (50% less runoff and 90% less sediment drift), protecting aquifers, and sustaining biodiversity. In economic and social terms, this program encourages rural development and propitiates the continuation of more generations of Costa Ricans in the coffee growing activity.

As part of Costa Rica´s unique model, and to ensure fair prices to growers for their product, a payment system has been developed called Settlement. How does this work?

Growers take their ripe coffee to a processor, who gives them a receipt and a cash advance, and then turns the beans into green coffee to sell in national or international markets. The Instituto del Café de Costa Rica (ICAFE) checks to make sure sales prices match international market conditions, using the New York Stock Exchange as reference. Beginning in October, every three months, processors submit Provisional Settlements to ICAFE, and adjust their payments to growers according to their quarterly sales.

In final support of the coffee production process and model, the world has recognized the geographical designation of “Café de Costa Rica.”

This allows distinguishing our product in the global marketplace, getting better prices and greater recognition for the effort and perseverance of the sector to produce the highest quality coffee. This certification of origin is fundamental in international markets, particularly in the European Union. 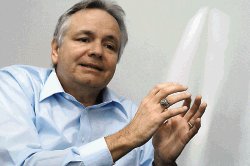 Ronald Peters Seevers is a graduate in Industrial Engineering from Purdue University, Indiana, U.S.A. He entered the coffee growing world in 1971 as Manager of Cafetalera Sarchí, S. A. He has been member of several boards of directors of companies related to the coffee sector, such as Compañía Costarricense del Café, S. A.; the National Coffee Growers Chamber (Cámara Nacional de Cafetaleros); the Costa Rican Coffee Institute (Instituto del Café de Costa Rica) and Grupo Financiero Cuscatlán de Costa Rica. Mr. Peters is currently Executive Director of the Instituto del Café de Costa Rica, a non-governmental public entity created by law responsible for regulating the national coffee growing sector and for guaranteeing a system equitable to all participants in the coffee industry: growers, processors, roasters and exporters.