Paper pods have been around for decades and have been much more successful in Europe than in the US. But, due to recent developments, pods are now in a position to become the more popular, higher quality, and profitable way to brew single cup coffee and tea in the US.

The espresso pods are the original, popular type of pod in the US, because they can be brewed successfully on any traditional espresso machine using a simple adapter screen in the porta-filter to insure that the espresso pod fits snugly in the brewing chamber. Espresso pods produce a consistent single or double shot of espresso for the consumer with minimal training. There is no need to grind beans, dose, and tamp. They eliminate the mess, eliminate the need for grinders, and allow roasters to control more variables than simply the coffee blend and roasting process. 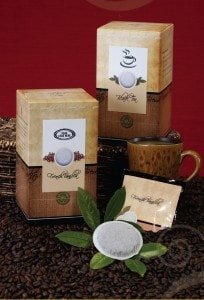 In the early 2000’s, the 1-Cup (or single cup) pod was introduced in the US because of the great success that was occurring in the European home market. The Europeans had already been educated on single cup brewing through vending machines, which are the norm at the workplace. But, in the US, the coffee consumer had never really been exposed to the single cup brewing idea and the initial pod brewers were not ready. In fact, the best home pod brewer made the smaller European size cups of coffee (4 – 6 ounces), which was too small for the American coffee drinker. Most of the pods that were sold to the home consumer were not individually wrapped and staling was an issue. In the office the pod brewers made larger cups of coffee, but they did not always brew a consistently good product, and the brewers did not hold up. Also, the brewer manufacturers and the pod makers worked on the pod systems very independently and there was no real consistency. These factors led to the initial failure of the 1-Cup pods in the US.

One day the brewer manufacturers realized that “brewing by the pot” was on the decline as Keurig began successfully converting more and more consumers to single cup brewing. The brewer manufacturers then became committed to pod brewing and working more closely with the pod makers. In 2009, they began launching a new line of more durable pod brewers that produce great cups of coffee. In fact, many people now feel that the new pod brewers can brew a much higher quality cup of coffee (and tea) than other single cup brewing systems, if the settings on the brewer are programmed correctly and if they use a quality pod that is delivered fresh. This quality point of difference is driving the new success of the 1-Cup pod brewing systems today.

Besides producing higher cup quality, pods are compostable. This provides a green story that more and more consumers are looking for when comparing pods against the other options (mostly non-biodegradable and non-recyclable plastic) for single cup brewing. Additionally, pods cost the consumer as much as 15¢ – 20¢ less per cup as compared to other single cup systems. Saving money is a very attractive thing, especially during this less than fabulous economy that we are living in. 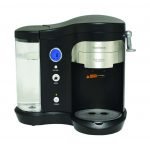 For the distributor, pods offer a way to get back to promoting their own brands, instead of promoting the same coffee brands that all of their competitors also offer. By private labeling the pods, the distributors have a unique point of difference just like they have now with their private label frack packs. Why not expand your branded product lines to include your branded line of pod products?

To expand on the current success of pods, the brewer manufacturers and the pod makers must continue to challenge themselves and focus together in three main areas:

So, watch for the pod success to continue to unfold because pods can produce a higher quality cup, pods are a more environmentally friendly alternative, pods can lower the cost per cup, and pods create unique branding opportunities. 2012 will be another big “Year of the Pod!”

Thomas G. Martin is the Executive Vice President, Chief Operating Officer and an owner of Pod Pack International, a company in Baton Rouge that specializes in manufacturing espresso pods, 1-Cup pods and provides other specialty packaging services for the coffee industry. Tom became associated with Pod Pack during the start up in 1996. Tom has a BS degree in Industrial Engineering (1977) from Mississippi State University, as well as an MBA (1987) from LSU. He has been married for 35 years to Mary Janice Brent (also a graduate from MSU in 1977) and they have three children. Tom’s two sons now work in the company.