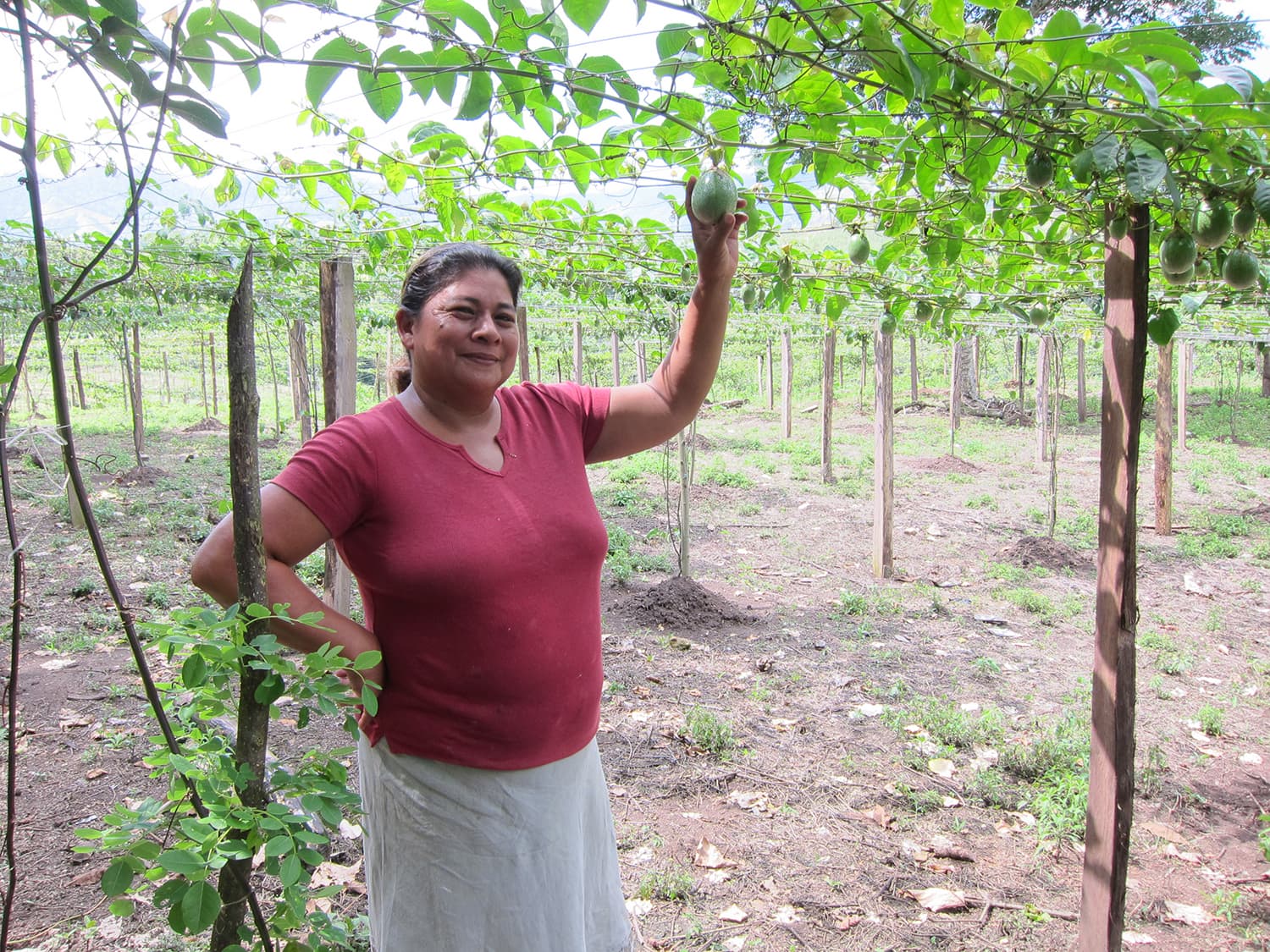 I first met Juana and Cesar at their home in El Coyolar, Nicaragua in 2008. I was traveling with Santiago Dolmus, Director of Social Programs for CECOCAFEN, a large Fair Trade cooperative based in Matagalpa. We planned to spend the day visiting co-op members who were participating in the food security project GMCR was sponsoring. After an hour we turned off the heavily pot-holed road, and started the climb to El Coyolar on a “bricked” road that eventually turned to dirt. After another 30 minutes we came to the end of the road where our Toyota pick-up stopped in front of a small home, constructed of rough lumber and a metal roof, with a cement floor.

As we were introduced, I learned that Cesar had lost his left arm in the war fighting the Contras. Both Juana and Cesar were in their early 40’s, and were happy to give me a tour of their 3 hectare farm. We passed about 1 ½ hectares of coffee, sparsely shaded by a handful of tall native trees and a few banana trees.  Much of their coffee was struggling in the sun, and needed more shade. Other parts of their parcel were long overdue for some pruning. Other than coffee and bananas, there were just a few fruit trees visible.

Like so many families in the region, Juana and Cesar experienced 3 to 4 months of extreme scarcity of food every year. With Santiago and CECOCAFEN’s technical team, they had developed a plan to improve their coffee parcel, to devote part of their land to producing food products for their own consumption, and to sell in the local markets. While the plans sounded promising, to me the greatest reason for hope was Juana’s “can do” approach. On this first visit, I could not tell if her attitude was real, or whether she was simply trying to impress me.

A year later, in 2009 I returned to El Coyolar and visited Juana and Cesar. Things were starting to change on their farm. They had developed a coffee nursery to renovate their parcel, and had planted malanga (a root crop) and a variety of fruit trees that they proudly showed me as we again toured their farm. 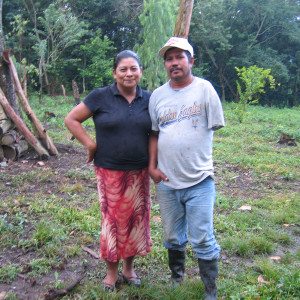 In September of 2010, with the help of Santiago, we returned, to produce the film “After the Harvest.” Santiago had asked Juana and Cesar if they would be willing to be in the film. Fortunately they were. After filming, we toured the farm. The fruit trees that were planted the year before were now towering over the coffee and were producing their first yield. Juana had started making marmalades from the fruit to sell at the local market as another source of income. Even their coffee looked healthier and more productive. Before leaving, Cesar gave me a gift – a homemade Sandinista flag that had been nailed to the outside of their home.

In August of this year, I returned to Nicaragua to conduct “Most Significant Change” interviews. While CECOCAFEN had provided good quantitative information about the project in their reports (i.e. how many families benefited from the project, how many training sessions had been held, etc.), this information largely reported on activities, not the impact these activities were having in the household. Michael Sheridan, from Catholic Relief Services (CRS), shared the “Most Significant Change” technique with me a couple of years ago, that is designed to elicit responses through interviews with project participants relating to the project’s impact. Now we had the chance to give this a try.

In Aguas Amarillas, a small community nestled in the mountains not far from Tuma la Dalia, Nicaragua, I interviewed Cresencio Pao, a coffee farmer, and asked him, “What has been the most significant change in your family’s diet since this project began 4 years ago?” Cresencio told me, “The window of 3-4 months of food scarcity has been closed. My family now has more than enough to eat all year long. This has had an impact beyond my family’s home. It has affected our local cooperative. People now believe that positive change is possible. And it has gone beyond the co-op and has brought the entire community an air of hope that just didn’t exist a few years ago.”

Later that day, we drove to visit Juana and Cesar. They both appeared to be doing well. Remembering the flag, I brought them a glass flask of Vermont maple syrup. What a difference two years can make!  As we walked around their farm, the fruit trees that we filmed in 2010 had grown significantly in the tropical climate. The young coffee plants had also grown, matured, and now appeared to be healthy and very productive. Juana told me that she was still selling marmalades in the local market, and then she said, “Come with me. I want to show you something.”

We followed a path through the coffee parcel and through a heavily forested area where we came out to an open field of approximately 1 ½ hectares. I was stunned. This field that had been fallow for years was now planted in passion fruit. Large 6 ½ ft. tall, 6” x 6” wooden stakes had been driven into the ground in nice even rows, separated by about 10 ft. Overhead, heavy gauge wire had been run between the stakes and connecting supports. The passion fruit vines had been trained on the wire and were now producing fruit that was ripening in the sun, hanging from the wire, and waiting to be harvested, packed, and shipped.

Juana and Cesar had been earning approximately $4,000 from their coffee. Now, according to Juana, even with the “low” market price for passion fruit, they will hire a few people to help run and manage this project. Yet even at current market prices Juana told me she expects that she and Cesar will earn over $700 per month (at least $8,400 per year) from passion fruit after expenses. This, combined with improved earnings from their coffee, and their own food production, will “put food scarcity behind us forever,” according to Juana. In addition, this new enterprise will start to provide new employment opportunities in this isolated rural hamlet.

When I first learned of “los meses flacos” (the thin months) of extreme food scarcity five years ago, I was stunned and felt powerless given the scope of this challenge. I wondered if change would be possible for families like Cesar and Juana. They, and many other families, are demonstrating that given the will, the necessary resources, and the technical support, hunger can be a thing of the past. It all starts with hope and a little of Juana’s “can-do” optimism. 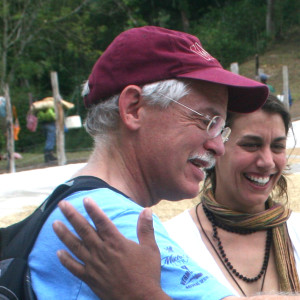 Rick Peyser is Director of Social Advocacy and Supply Chain Community Outreach for Green Mountain Coffee Roasters where he has worked for over 24 years. He is a past President of the Specialty Coffee Association of America, the world’s largest coffee trade association, and served six years on the Board of Directors of the Fair Trade Labeling Organizations International (FLO) which sets the standards for Fair Trade that benefit over 1,500,000 small-scale farmers around the world. Currently Rick serves on the Coffee Kids Board of Directors, the Food For Farmers Board of Directors, and the Board of Directors of Fundacion Ixil which is working to improve the quality of life in Ixil coffee communities in El Quiche, Guatemala.