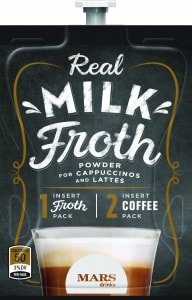 Philadelphia, PA (January 5, 2016) – Mars Drinks – a 100% workplace dedicated division of Mars, Incorporated –today announced the launch of Real Milk Froth Powder, the latest innovation in single-serve drinks solutions designed specifically for the workplace. Real Milk Froth Powder can be paired with any of Mars Drinks’ espressos, coffees or teas to deliver delicious coffee-shop-style drinks for the office, easily prepared at the touch of button with MARS DRINKS™ brewers.

“By 2020, millennials will make up 40 percent of the workforce*, and they’re looking for a wide variety of drinks at work, especially espresso-based drinks like cappuccinos and lattes,” David Flochel, general manager of Mars Drinks North America said. “In a recent survey** commissioned by Mars Drinks, we learned that millennials view coffee as a way of connecting with older peers and colleagues at work and fortunately, they no longer have to leave the office to get their favorite drinks. Mars Drinks is helping to bring people of all generations together by providing the drinks they love, conveniently in the workplace.”

For more information about Mars Drinks’ Real Milk Froth Powder, or to request a free trial of the Mars Drinks system interested parties can call 1-877-273-5812 or visit marsdrinks.com. Current customers can order Real Milk Froth Powder for MARS DRINKS brewers through their existing distributor relationship, or directly from Mars Drinks at myflavia.com.
###
*“What Millennials Want in the Workplace and Why You Should Start Giving It To Them.” Forbes, January 13, 2014, http://www.forbes.com/sites/what-millennials-want-in-the-workplace-and-why-you-should-start-giving-it-to-them/
**Ipsos poll conducted for Mars Drinks from April 8-14, 2015. https://marsdrinks.com/blog/2015/04/22/poll-americans-say-yes-coffee-work-no-monday-blahs/

ABOUT MARS DRINKS
Mars Drinks creates great tasting moments at work by being at the center of workplace engagement, collaboration, productivity and well-being. Throughout North America, Europe and Asia, Mars Drinks supports businesses who want to provide great working environments for their people. Part of Mars, Incorporated Mars Drinks focuses its energy and resources on the workplace, with the belief that people are the most important asset to any business. In 1973 Mars Drinks introduced KLIX® the first-ever fully automatic in-cup drinks vending machine that serves large manufacturing channels across Europe. In 1984 Mars Drinks pioneered the single serve hot drinks category, introducing FLAVIA®, the first system for making hot drinks using fresh ground coffee and leaf teas sealed in individual servings. Through its ALTERRA® Coffee Roasters coffees, THE BRIGHT TEA CO.® teas, and DOVE® Hot Chocolate, Mars Drinks creates more than 1 billion great tasting moments at work! Find Mars Drinks online at http://www.marsdrinks.com.
ABOUT MARS, INCORPORATED
In 1911, Frank C. Mars made the first Mars candies in his Tacoma, Washington kitchen and established Mars’ first roots as a confectionery company. In the 1920s, Forrest E. Mars, Sr. joined his father in business and together they launched the MILKY WAY® bar. In 1932, Forrest, Sr. moved to the United Kingdom with a dream of building a business based on the objective of creating a “mutuality of benefits for all stakeholders” – this objective serves as the foundation of Mars, Incorporated today. Based in McLean, Virginia, Mars has net sales of more than $33 billion, six business segments including Petcare, Chocolate, Wrigley, Food, Drinks, Symbioscience, and more than 75,000 Associates worldwide that are putting its Principles into action to make a difference for people and the planet through its performance.