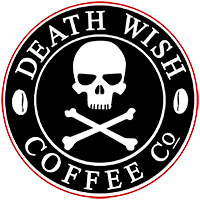 Round Lake, NY, January 28, 2016 – The creators of “The World’s Strongest Coffee”, Death Wish Coffee Company, have taken first place in the Intuit QuickBooks’s Small Business Big Game Competition, securing them a thirty-second commercial during football’s biggest game offering more than 100 million viewers. Death Wish Coffee Company entered the competition after the success they witnessed from GoldieBlox, the 2014 winner, who went on to grow dramatically in size.
“When Intuit told us that we had won, I immediately started to tear up because I knew how much this meant to my team and our customers,” said Mike Brown, owner of Death Wish Coffee. “I feel so grateful because there are so many types of coffee out there but our customers love Death Wish Coffee to the exclusion of everything else.”
Death Wish Coffee entered QuickBooks Small Business Big Game two weeks after the start of the competition, but the late entry didn’t stop the Death Wish fans from rallying behind their beloved hardcore coffee. Millions of votes determined the top 10 and then the final three which included Death Wish Coffee Company, Chubbies Shorts and Vidler’s 5 & 10.
“The World’s Strongest Coffee” stands victorious thanks to their loyal fans and dedicated staff of eleven, led by Brown who perfected the Death Wish Coffee recipe in the basement of his coffee shop four short years ago. Brown opened Saratoga Coffee Traders, a cafe and coffee spot nestled on Broadway in Saratoga Springs in 2008 and began experimenting with coffee blends. Customers seeking stronger coffee, an excitement for innovation and hours of dedication birthed Death Wish Coffee as it is known today.
“The inspiration for the name Death Wish came from a gift my girlfriend bought me while she was on vacation in California,” said Brown. “One day it just hit me, Death Wish would be a killer coffee name, so that’s what I decided to build the brand around.”
Death Wish Coffee is a mixture of Arabica and Robusta beans artfully blended to provide the highest caffeine content possible. Death Wish boasts deep notes of dark cherry and chocolate that perfectly compliment the dark roast shade. Death Wish Coffee is organic, fair trade and crafted by experts on one of the best roasters in the world. Death Wish Coffee Company also offers Valhalla Java, an artisanal, earthy blend with notes of walnut and chocolate. Death Wish Coffee Company is brewing up some new concoctions that could make their way to customers in the spring of 2016.
“We’re so confident this coffee is worth every penny that we offer a money back guarantee,” said Brown.
Keep an eye out for the skull and crossbones in a store near you. “The World’s Strongest Coffee” can always be found on amazon.com, eBay.com, deathwishcoffee.com, in Price Chopper Supermarkets throughout the Capital Region, and at Saratoga Coffee Traders on Broadway in Saratoga Springs, NY.