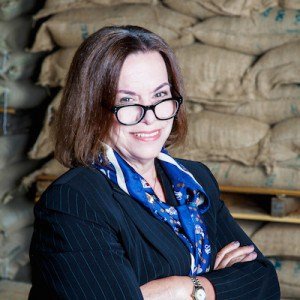 Lifetime Achievement Award
Leonor Gaviña-Valls and the Gaviña Family
Leonor Gaviña-Valls is the daughter of Gaviña’s founder, Don Francisco, and currently runs the company with her three brothers. As a young girl, Leonor would work alongside her brothers and father at their coffee plantation and roasting plant. Now, she is the vice president of marketing and is responsible for the company’s public relations efforts, the marketing of its coffee brands, and overseeing its major charity endeavors.

Leonor is a licensed Q Grader, the only professional accreditation in the industry for coffee cuppers from the Coffee Quality Institute (CQI). As a resident Q Grader, Leonor routinely conducts cupping sessions to ensure the richness and flavor of each coffee blend. She actively works to improve the quality of coffee and set industry standards and practices through several organizations. She is also a former board member of the Pacific Coast Coffee Association and a founding member and past president of the Specialty Coffee Association of America. Leonor received the SCAA’s “Outstanding Contribution to the Association” award in 1994 for her exceptional leadership. She is also a graduate of the 2005-2006 Women in Coffee Leadership Program where her class was bestowed with the Specialty Coffee Association of Europe’s Better Beans Awards, an award that honors those who have noticeably contributed to the improvement in the quality of coffee worldwide.

Leonor holds a Bachelor of Arts in Economics from California State University, Los Angeles. Leonor is actively involved in several non-profit organizations and is currently a member of the board of directors of the Alzheimer’s Association of Greater Los Angeles and International Women in Coffee Alliance. She currently resides in Southern California. Recently, Leonor was honored with the CalState LA Alumni Family Award and the Los Angeles Latino Chamber of Commerce Large business award.

With regard to the family overall and its company, F. Gaviña & Sons, Inc., is the nation’s largest minority owned family coffee roaster, has been a leading producer of high-quality and great-tasting coffee for more than four generations. Spanning over 140 years, Gaviña’s unmatched experience as coffee growers and roasters dates back to the family’s humble beginnings in the rich coffee-bearing soil of Cuba, where patriarch Francisco Gaviña was born and honed his skills as a coffee producer. After immigrating to the United States with his wife and children, he further cemented the family’s coffee legacy by establishing F. Gaviña & Sons, Inc. in Vernon, California in 1967. Today, the company is still owned and run by Don Francisco’s four children: Francisco, Pedro, José, and Leonor.