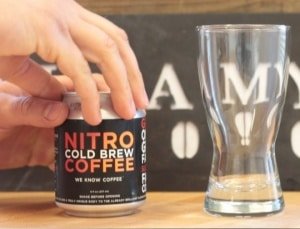 FOR IMMEDIATE RELEASE – March 21, 2016 (Albuquerque, NM): Villa Myriam, the only coffee company of its kind in New Mexico, has recently introduced Nitro Cold Brew to the marketplace. Nitro Cold Brew, a healthy cold coffee beverage, is now being distributed to more than 200 locations throughout New Mexico, and the company is preparing for national distribution. An exciting new venture, Nitro Cold Brew is a process of extraction in which the coffee is never heated. It is steeped in cold water for a long period of time then infused with nitrogen to create a very unique texture and experience. Nitro Cold Brew was named the 2nd Best New Coffee product at Coffee Fest 2015, one of the largest coffee festivals in the world.

Villa Myriam is owned by brothers David and Juan Certain, and is the only coffee company in New Mexico that grows, imports, roasts and distributes coffee. The Certains launched their coffee company in 2011, and subsequently opened the The Brew by Villa Myriam in 2013, a coffee shop at 311 Gold SW, which celebrated its two-year anniversary in October 2015. The brothers grow the coffee beans on their grandfather’s farm in Colombia, and then roast and distribute the coffee from their facility at 2420 Midtown Pl. NE, Albuquerque, where Nitro Cold Brew is also canned.

Villa Myriam is the recipient of numerous coffee roasting and brewing awards, and is an example of healthy small business growth and represents successful economic development practices in New Mexico. The company began operations in the South Valley Economic Development Center Mixing Bowl kitchen, and quickly moved to its first location two months later. The company supports living wage practices by paying its employees well about the federal minimum wage at $10.10 per hour.

“We believe that by being good to the environment and to anyone who comes into contact with our coffee beans, we will produce a better product,” said Juan Certain. “We continue the tradition that our grandfather started over fifty years ago, being respectful of the environment and of each other while producing a number of great products.”

Juan and David Certain came to the US as political refugees during the hard times of violence in Colombia. After things settled, they decided to retake the passion for coffee and go back to the farm and import their beans to Albuquerque, NM. It seems like a perfect match with their current location since the coffee was grown at high elevation and roasted at almost the exact elevation from where the beans are from.

Villa Myriam Coffee Company comprises a family-owned farm in Colombia, roasting and distribution facilities in Albuquerque, NM, as well as The Brew coffee shop located at 311 Gold, SW, Albuquerque. Villa Myriam is the only New Mexico company that grows, imports, roasts and distributes coffee. Owners Juan and David Certain take pride in the fact that all of their coffee beans are grown on their grandfather’s farm, and they know the exact origin of their coffee, as well as who picked it. The company adheres to the highest standards in environmen­tal sustainability and social responsibility. Villa Myriam recently launched its Nitro Cold Brew Coffee drink. NitroCold Brewing is a process of extraction in which the coffee is never heated. It is steeped in cold water for a long period of time, then infused with nitrogen to create a very unique texture and experience.