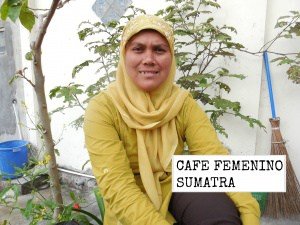 Organic Products Trading Company announced this week the arrival of its newest Cafe Femenino coffee into New York and Oakland. This coffee from the Cafe Femenino Sumatra Program comes after several years of development. This is an exciting new Cafe Femenino Program producing excellent coffee. There is no wonder it is getting so much attention. It is not only the women who produce it but what the coffee stands for that make it special.

In the Takengon region where this coffee is produced, the women coffee producers formed the country’s FIRST all women’s cooperative, KOKOWAGAYO. By February 2015, they were certified Fair Trade and organic and became an officially sanctioned Cafe Femenino Program by the end of the year.

Ernani, a leader of Kokowagayo’s women’s group told us, “in a traditional cooperative, the men vote for how the social premiums are to be invested; often times the women’s priorities are different and our voices are not heard. This was the motivation to form the first all-women cooperative.”

KOKOWAGAYO’s Cafe Femenino Sumatra Program strives to increase the role and capacity of women in coffee farm and financial management. As this new Cafe Femenino Program in Sumatra begins its first year, we already see this group of business-oriented women paving the way in redefining gender norms in Sumatra.

With a membership of 476 women, they have already begun construction on a community center adjacent to the wet mill. Using the first year’s Cafe Femenino premium as a group, the women decided to build a safe space for women to congregate and learn new skills through workshops. This community space was their top priority. Having decision-making power for the first time, for these women, is making history.