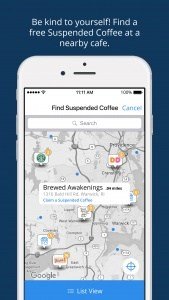 PROVIDENCE, R.I.— A Providence start-up is setting its sight more broadly than simply introducing the latest innovative gifting app – it has created a platform that enables people to buy cups of coffee for anyone, anywhere as “random acts of coffee™” that build community and enhance personal relationships with friends, colleagues, employees, business prospects and even strangers.
The new iPhone and Android app is called Nack (www.getnack.com) and from a functional point-of-view, it provides a fun way for individuals to gift cups of coffee to friends and “suspend coffees” to others by purchasing cups anonymously in advance and leaving them at specific coffee shops for anyone who could use a little cheering. In addition, Nack can store the coffee preferences of co-workers and friends to streamline the daily coffee run.
“Nack is more than a mobile gifting app—it is a social network built around the coffee experience. It is designed to facilitate thoughtful acts that can be expressed effortlessly as part of the average person’s daily routine and lifestyle,” said Paul Haun, founder and CEO of Kaneland LLC, the Rhode Island company that conceived and developed Nack. “Getting a cup of coffee and enjoying it with friends and co-workers is an important social ritual. Suspending a cup of coffee for a stranger is an easy gesture that fulfills peoples’ desire to have a positive impact on the world.”
Coffee drinking is a great common denominator among Americans, making the beverage the ideal medium for gifting and sharing experiences. Just under two-thirds of Americans (64 percent) drink at least one cup of coffee per day, and these coffee drinkers consume an average of 2.7 cups per day, according to a July 2015 Gallup poll.
Disruptive App Born and Bred in Rhode Island
Nack was conceived by Rhode Island native Paul Haun, a 32-year old entrepreneur and resident of Warwick with a vision for helping out other people. Haun launched Kaneland in Feb. 2014 to develop innovative lifestyle applications for smartphones. After bootstrapping the company with personal funds and the support of family and friends, the company attracted venture funding in the third quarter of 2014 and proceeded to build out a management and project team to bring Nack to market.
“We are looking to disrupt the coffee market by introducing a social aspect that enables anyone to purchase and share coffee at anytime from anywhere,” said Haun. “We see the fast-growing integration of mobile payments in the business models of today’s coffee shops, and feel Nack will be influential and widely adopted by chains and independent retailers alike.
“Nack also provides independent coffee shops and smaller chains with the technology backbone for an app that will promote and advance their business, thus leveling the playing field with bigger players in the market. The feedback we are getting in our discussions with coffee retailers and other potential partners has been very positive.”
Suspended coffee is a more than 100-year old tradition that began in the working class cafes of Naples, Italy. As folklore explains, someone who had experienced good luck or had better economic resources would order a “caffe sospeso” (Italian for suspended coffee) by paying for two cups and receiving just one – the second cup would be held or suspended for someone in need who asked for it.
Though the app can be downloaded and used anywhere, its demonstration market is Kaneland’s home state of Rhode Island, which is trying to attract and build a technology corridor. A prominent local coffee house chain, Brewed Awakenings, headquartered in Johnston and with four additional locations around the state, is the first to integrate its stores’ backend menu and payment system with Nack. Coffee lovers visiting any Brewed Awakenings location can redeem coffee gifts directly from the merchant by showing an app-generated coupon code to the cashier. Patrons of non-partnered stores will use PayPal to facilitate the sending and redemption of coffee gifts.
“Gifting and suspending coffee through the Nack app strikes me as a really good way to promote my stores while giving back to the community,” said David Levesque, owner and president, Brewed Awakenings Coffee Shops. “Coffee brings people together and the concept of buying a cup of coffee for someone as an act of kindness makes sense to me. I have high hopes for our partnership with Nack.”
Launch sponsors and other organizations that have already embraced Nack and pledged to gift and suspend thousands of cups of joe for their employees and customers in and around Rhode Island include Cavanagh Company, Priority Management Group, Feed 1000, Northwestern Mutual, Paul Bailey’s Chrysler Dodge Jeep and Ram dealership, and others.
A short video on YouTube explains in greater detail how easy the Nack app makes it for anyone to suspend coffees.
About Kaneland, LLC
Kaneland, LLC (www.kanelandllc.com), based in Providence, R.I., is a mobile application company. It was founded in Feb. 2014 to develop innovative lifestyle applications for iOS and Android phones. Its first product, Nack (www.getnack.com), is a mobile social network which allows users to perform anonymous acts of kindness by “suspending coffees” for strangers as well as sending gifts of coffee to friends and colleagues. The app also supports the marketing efforts of coffee shops around the world. Kaneland is a member of the National Coffee Association.
# # #
Random Acts of Coffee is a trademark of Kaneland, LLC.