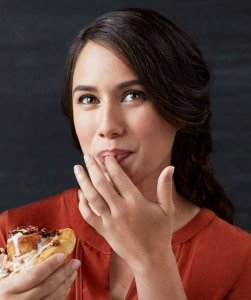 Parsippany, NJ (March 27, 2017) – Leading kitchen appliance brand, KRUPS, today launched a new national campaign. The campaign—Delight in the Details—challenges and encourages consumers to find delight in the seemingly small details that make each morning and day unique. KRUPS understands that consumers enjoy surprising friends and family with thoughtful treats made with care and the campaign celebrates ways to make delighting loved ones easier than ever.

Through work with New York-based creative agency, A Different Kind of Animal and New York-based media agency, Maxus, KRUPS identified a portion of the consumer landscape that derived pleasure not just from the thoughtful details of a well-made product, but also the ability to delight those they love with a mouth-watering result.

To articulate this insight, KRUPS tapped A Different Kind of Animal. “KRUPS has always been known for precision. With Delight in the Details, we sought to evolve the brand in a way that leverages that heritage but reveals a more emotional, deeper truth about the category and consumers,” says A Different Kind of Animal co-founder and Chief Creative Officer, Ben Cruz. “In developing every campaign asset, it was critical for us to capture delight – the sparkle in the eyes, that feeling of surprise or anticipation – and show it beside the unexpected detail on the product or food that makes the moment truly special.” The campaign will highlight the newest product launches including a Waffle Maker, Toaster Oven , Coffee Maker and Super Automatic Espresso machine.

Maxus strategized the 360-degree multi-tiered paid media strategy to launch and support the campaign. The campaign aims to deepen brand awareness, reach shoppers across all touch-points of their consumer journey and support the brand’s expansion into the breakfast category. Delight in the Details combines digital, social and print content with KRUPS’s first-ever national addressable television buy.

An exclusive print and digital initiative will run across Hearst Magazines brands, including Delish, Country Living, Good Housekeeping, HGTV Magazine, Woman’s Day and Esquire. A highlight of the six-month campaign is a series of 20 how-to recipe videos, produced by Delish and the editors of each brand, marking the first large-scale cross-collaboration video series for the food, recipe and entertaining site. The 60-second videos, produced in Delish’s signature style, incorporate KRUPS products and bring the Delight in the Details message to life. The first video to launch is a Delish collaboration with Country Living, showcasing the KRUPS waffle maker, along with the other products featured in the new campaign, and a recipe for Cinnamon Bun Waffles, which launches on Delish.com and CountryLiving.com on March 27.

“We are excited to partner with A Different Kind of Animal, Maxus and Hearst to launch this initiative that has been years in the making,” said Michele Lupton, Marketing Communications Director Groupe SEB. “Delight in the Details not only allows us to broaden our reach and introduce KRUPS products to a larger consumer base, but also is a mantra for our brand and rallying cry for our consumer. Throughout our 100-year heritage, KRUPS has dedicated itself to designing products that pay thoughtful attention to detail and this campaign embraces exactly that. It challenges us to continuously design appliances with ‘the details’ in mind, whether that be adding additional functions for ease of use or taking product development one step further to ensure we are providing our shoppers with the best quality.”

Delight in the Details will debut with a 30-second addressable television buy that airs on Monday, March 27, 2017 across cable providers DISH, DirecTV, Altice and Comcast. KRUPS will employ an addressable television strategy in order to best leverage consumer data and hone in on their target shopper. The ad will be served to consumers who match KRUPS consumer profile, and are active shoppers at retail locations where KRUPS products are sold.

Also, coinciding with the campaign launch, in April, KRUPS will unveil a redesigned web site, KRUPSUSA.com, which reflects the look and feel of the campaign and incorporates new features such as a Delight in the Details landing page, interactive recipe section and content-rich product pages within each appliance category.

About KRUPS
Precision and unwavering performance uniquely define the philosophy of KRUPS, established in 1847 in Germany by Robert Krups. The company first introduced high-grade rotary and spring scales; then with the introduction of electricity, the brand shifted focus and a century later established itself as a world leader in coffee machines, espresso machines, and a wide range of other appliances. The KRUPS heritage of German engineering combines functional, yet rigorous design with technical perfection. Built for those who continuously seek new experiences and take pleasure in understanding how things are done, KRUPS’ passion for perfection is apparent. Its range of products provides the tools necessary to deliver the highest taste results every time. KRUPS is inspired by experts and demanding consumers with uncompromising standards of genuine performance and quality. For more information, visit www.krupsusa.com

About A Different Kind of Animal
Hunt, hatch and howl with A Different Kind of Animal – a pack of problem-solvers that has been building brands and starting conversations between people and the world’s leading housewares, beauty, spirits, luxury, entertainment, education, and non-profit companies since 2012. We’re guided by the belief that when we question everything, we can better tailor ourselves to our clients’ specific needs, so we can adapt to their environments in ways that give them a partner who gets who they are and how to help them go full-on alpha. We’ve hunted down more emotional territories for All-Clad, KRUPS and Rowenta, hatched a big idea for BET, and helped wet n wild® howl. Cartier, L’Oréal, Jimmy Choo, Paris Chamber of Commerce, Foundation Center, Cantu and Bonne Bell are a part of our pride. We’re based in New York, but you can spot us in Los Angeles, Paris and Tokyo. For more information, visit us at adifferentkindofanimal.com

About Maxus
Maxus (www.maxusglobal.us) is a media communications agency designed around the idea and not just the media. Born in an already fully digital age, it is the only network with its own creative technology division and has been named the fastest growing media agency for the last four years (Source: RECMA). Maxus embraces technology and innovation to help its clients lead change and achieve tangible business results.
Maxus is part of a global media network under GroupM, the world’s largest media investment management group that serves as the parent company of all WPP media agencies, and buys over one third of the world’s media every day. Maxus employs over 2,700 people in 70 offices across 55 markets, and works for some of the world’s most well-known brands.