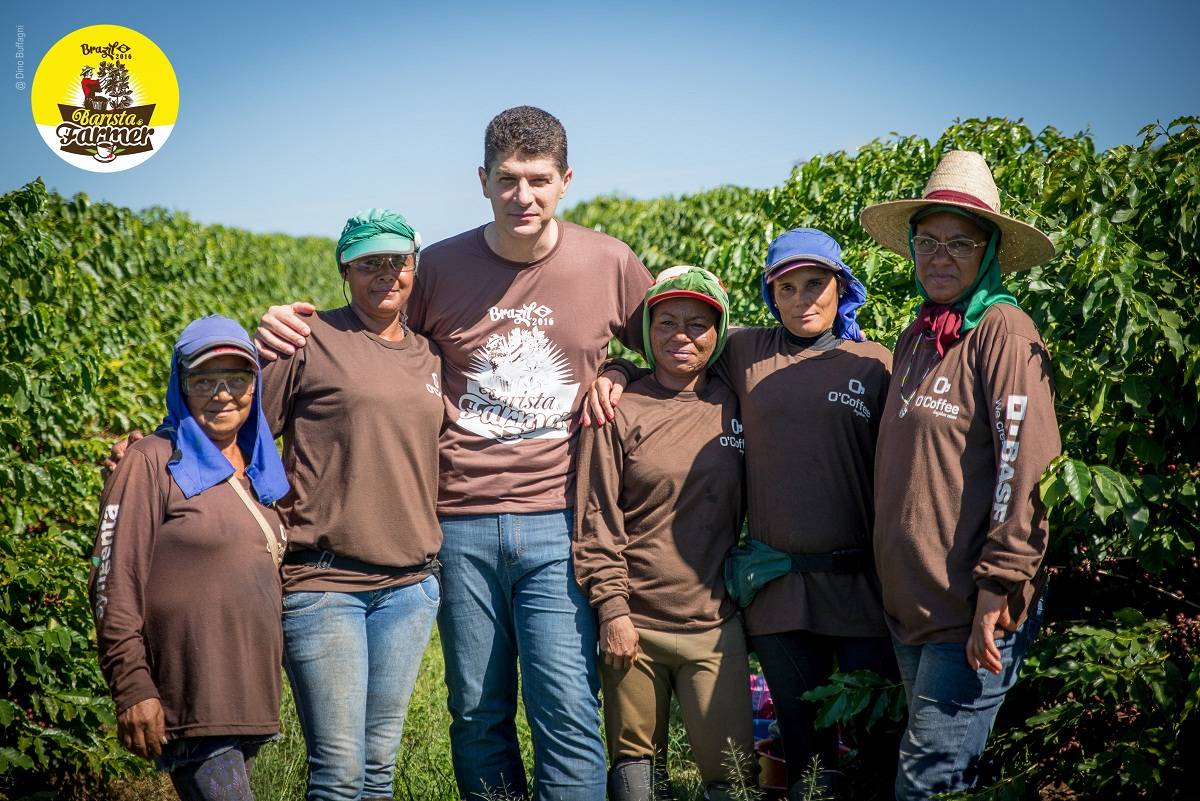 Barista & Farmer, day three
The ten baristas in the plantation for the first time

Edgard Bressani, CEO of O’Coffee Brazilian Estates: “the most important value?
Our community of people”

San Paolo, 6 may – The third day of Barista & Farmer was highlighted by the first encounter of the ten international baristas with the endless rows of the O’Coffee plantation. The participants woke up at five o’clock in the morning and test themeselves for two hours, just like a brazilian picker. “The best part – says proudly Francesco Sanapo, creator of the talent show dedicated to the specialty coffee culture – is that when the picking time was over they asked to have an extra hour to work. This, is the spirit of the project.” The contestants had to pick only the ripe cherries and, following the show’s tradition, the practical activity of the morning were found in the theoretical classes of the academy of Barista & Farmer in the afternoon, where the baristas attended a lesson about the different defects of the coffee cherries.

Even though coffee productions in Brazil are basically industrial, in the O’Coffee farm a great attention is paid to the people, the workers and the community of the entire area. “We are in the state of San Paolo, many kids that grow up here, in small towns, after getting their degree, prefer to move away to the big cities- says Edgard Bressani, CEO of O’Coffee Brazilian Estates – we try to keep them here trough several social projects: for example, one of them, is an essay competition where they have to write about coffee. The six finalists will be invited to visit the farm: we want to open our doors for them, whether they are commercial agents, or agronomists or chemists, they can work with us. In this way we don’t waste our talents. After all, we are a relatively small competitor when compared to other producers in Brazil: in order to roduce big quantities of coffee, huge infrastructures become necessary while we, instead, are looking for excellence that, on the contrary, requires skills.

I created a project which is now respected and that is considered to be in the top five of the country – says Bressani – and I did it by choosing the right people: the ones with a good heart who wants to get along and share my philosophy. People who scare me are the mean ones, the rotten apples. When I arrived here I had to replace many of them, I wanted to surround myself with like minded coworkers who had my same attitude. It’s true that I’m in a managing position, but that’s it. They are the ones who produce what I will sell and for that they deserve great respect. We have many projects for our workers, we have a talent show at the end of the year, people here are awarded for being with us for 3, 5, 10 or 15 years, the more you stay with us, the more we reward you. At the end of the year we have a party with all the families that sometimes is attended by up to 400 people. I work hard to keep everyone with me, to make their lives better, because they help the company’s growth and therefore we try to pay them more then the other producers of the area. We are growing a lot and we will keep on doing it because we always have a bigger demand for our product, but we will try to do it step by step trying to make a difference. Because if we end up being like any other coffee project, then, what’s the point?”

“I think I’ve been lucky in my career, I was a diplomatic but when I left my political career I was invited by the brazilian minister of agriculture to run an international promotional program for specialty coffee. I started traveling the world, attending Wbc competitions, I became a judge, the first of my country. The fact that I like people helped my creating connections all over the world. And this is definetly the most important thing. I’ve been very lucky, I stopped being a diplomat and became a coffee ambassador.”