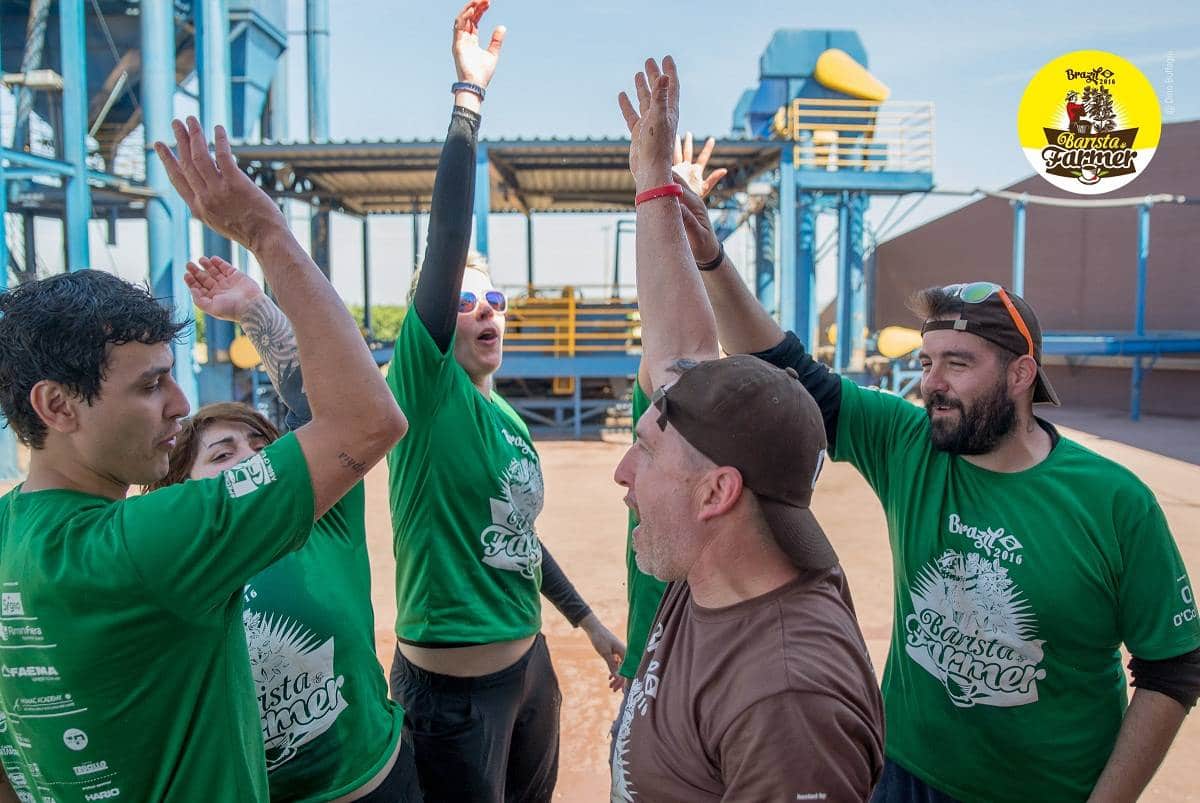 Discovering the baristas of the third edition
Papaya Power team lead by coffee lover Nino Conti
San Paolo, may 7 – The fourth day of Barista & Farmer saw, as usual, the baristas reach the plantation at the break of dawn to pick up the cherries. This time though, the participants used the stripping method, described in this way by the talent show creator Francesco Sanapo: “it’s one of the most common picking method in Brazil and so I thought it was important for them to know it because they have to understand all the different undertones of the coffee production, this is one the goals of thi sproject. If we think about it, it’s the same method applied while picking olives in Italy, just like they do in Apulia, which is where I come from. You shake the trees in order to make the olives fall and you collect them by placing a cloth under the plant which will be used to carry them all back to the olive mill, or the beneficio, in this case. In this way, all the cherries from the plant are collected and they will later be selected using water: we put the cherries in a pool and they are divided by their specific weight, because the ripe cherry is heavier and remains at the bottom of the pool while the dry or immature ones stay afloat along with branches and the leaves.”

When this process was over, the ten baristas have been divided in two teams, which will stay the same until the end of the game. The first one is Free Mandela, lead by Lavazza regional trainer Fabio Sipione, and ranks in Miguel Fernandez (Spagna), Evani Jesslyn (Indonesia), Guido Garavello (Italia), Daniel Rivera (Porto Rico) e Rosey Hill (Australia). The other team Papaya Power, whose captain is coffee lover Nino Conti (also a protagonist of the show’s last edition) and is composed by Olga Kaplinka (Russia), Agnieszka Roweska (Polonia) , Amy-nare Manukian (Armenia), Nikolaos Kanakaris (Grecia) e Raphael De Souza (Brasile).

The morning ended with a “classic” challenge of the talent show, the coffee sack race while the activities continued in the afternoon in the classroom, where Andrej Godina, teacher of the Barista & Farmer academy, held a lesson regarding the sensitory abilities, which mean “the features of a cup of coffee, from the analisys of the aromas to the ability to recognize the flavors. The class proceded with a blind test and ended with the tactile characteristics of the coffe in the palate, the body of coffee.”

Since we are close to the halfway point of the talent show, it’s time to collect some more impressions from the Papaya Power team on their experience in Brazil so far.

Nikolaos: “There are no words to describe this experience, each day is full of activities, we are doing things I’ve never expected, like picking cherries that will end up in someone’s coffee. Now we are bonding even when we are not picking or attending classes. What’s disappointing? My cherries selection! (laughs) Jokes aside, the show is amazing, absolutely matching my highest expectations.”

Raphael: “It’s good to be here, it’s great to learn new things, but the best part of this experience is definetly the connection with people from different countries and cultures. I already had classes on coffee but here there’s a direct contact with the product and the people who work and produce it. I’m always in touch with coffee but here’s a different experience. When I saw the promo of this edition, that takes place in my country, I thought: “hey, why isn’t there someone from Brazil? That brazilian must be me and so here I am.”

Olga: “Today in the plantation was amazing. Like a sport, tiring but fun. It’s a team work interesting and complex. I like the idea of being able to develop my receptors and become a better professionist. I have to say I had no expectation before I left Russia, not because I was not believing in the project, but because I wanted to experience it first had, without prejudices. The real discovery of this trip? Papaya! (laughs). I never had it before and I love it. That said, it’s awesome to discover how much history there’s behind 30mm of coffee.”

Amy-nare: “We keep on learning new things, day after day. I don’t speak english very much but I have to say that everyone’s helping me a lot, we really are a team. There’s no competition among us, we are here for each other. Looking at it from a distance, it looked like a piece of cake.. I have to go to Brazil, pick some cherries.. what will it take? How wrong I was! It’s hard to wake up everyday at five but it’s really worth it.”

Agnieszka: “Each day is better than the one before it. I definetly prefer to spend my time in the rows in the plantation rather than in class: I can have theorical lessons in Poland, but the plantation, well, that’s what I’m here for. I like when we work as a team, we are getting to know each other betternd we are a beautiful group of people. I wish I had more time to rationalize what I’m learning but that’s how it is here, we never stop.”