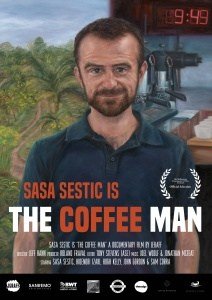 The movie documenting Australia’s World Barista Champion, Canberra’s Sasa (pronounced “Sasha”) Sestic, will have its world premiere in Australia on 18 May 2016, ahead of premieres in USA, UK, France, Germany, Malaysia, Singapore, Czech Republic, Italy, Honduras and Sasa’s home country of Serbia. The Coffee Man explores the extraordinary world of specialty coffee and the lengths one man will go for ‘coffee nirvana’. The journey takes the viewer from the farm to cup, to the dizzying heights of international competition, where Sasa will win at any cost, even if that requires ‘smuggling’ Australian milk through US customs to attain the perfect flavor profile.

Sasa, a former immigrant from war-torn Bosnia found international acclaim of a different kind when he first moved to Australia in 1996, by representing his new country at the 2000 Sydney Olympics. Meeting heroes such as Cathy Freeman gave Sasa a taste a victory that would live with him until 15 years later, when he outclassed competitors from almost 52 countries to win 2015 World Barista Championship (WBC) title in Seattle – the ‘Olympics’ of coffee. Filmmakers Jeff Hann and Roland Fraval from Jeraff Productions started documenting their journey with Sasa, unbeknownst what the final, world beating outcome would be. They were merely documenting how far one person would go to source the perfect cup of coffee.

Taken under his wing and trained ‘Karate-Kid-style’ by 2014 World Barista Champion Hidenori Izaki, the movie sees Sasa trekking across the globe from Ethiopia to Columbia to Seattle, searching for the best beans, and in one comedic moment, even smuggling what he believes to be the “best milk in the world” (Australian of course) into the USA; just so he could produce the world’s best cup of coffee.

Director of The Coffee Man Jeff Hann says, “As documentary filmmakers, cinema magic is often created when you have no idea what the outcome will be. We had the raw ingredients; one man, with a powerful passion to produce the best tasting coffee, ever! Coffee is one of those drinks that unites us all. It’s what drives us the moment we get out of bed, it’s what we use as a social lubricant between friends, and it is an essential tool for the most important business decisions. Why ruin these important occasions with something second rate? It’s for this reason I know the world will fall in love with Sasa’s journey; they’ll even learn a few tips along the way to perfect their own coffee at home!”