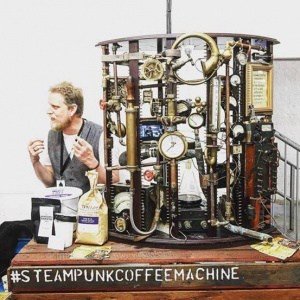 Premiering at the London Coffee Festival in March 2016, festival-goers were treated to a cold drip coffee machine unlike any other they had ever seen. Influenced by Heath Robinson and Jules Verne, the Steampunk Coffee Machine is the brainchild of artist and entrepreneur Peter Michael Charles Harris. Producing cold drip coffee behind the wizardry, the machine is an amalgamation of art and coffee. As one festival goer commented, “this is like, the most amazing thing in the universe ever!” Voting on the festival after the event, Professor Harris’ machine was ranked the number one innovative product by consumers and trade visitors alike. Harris says of the accolade “it really is an honour to have been voted by the public as the most innovative product at London’s go-to festival for coffee.” During the festival several roasters including Union Hand Roasted, The Gentlemen Baristas and Perk & Pearl, supported the machine with free coffee for consumers to then taste for a donation. It didn’t just look great and produce fantastic quality cold drip coffee, the machine also raised £275 for a worthy cause, delivering clean water to coffee growing communities through Project Waterfall during the event.
The Steampunk Coffee Machine was two years in the making. Inspired by a visit to the London Coffee Festival in 2013, Peter made it his mission to create a unique, steampunk inspired cold drip coffee machine that not only delivered great cold drip coffee, but looked amazing at the same time! After collecting parts from car boot sales and second hand shops he then set about building the machine in time for this year’s festival. Created from scratch, every machine produced is unique.

Steampunk Coffee Machine No.1 is now in the proud hands of The Black Penny coffee shop, based in Covent Garden, who plan on installing it as a central feature. But fear not! Professor Harris has not been idle and a second machine, as unique as the first, is available for purchase or hire.
For more information about the Steampunk Coffee Machine, to enquire about purchasing or hiring the current machine or to find out about getting a bespoke machine made, contact Peter Harris at petermcharris@gmail.com