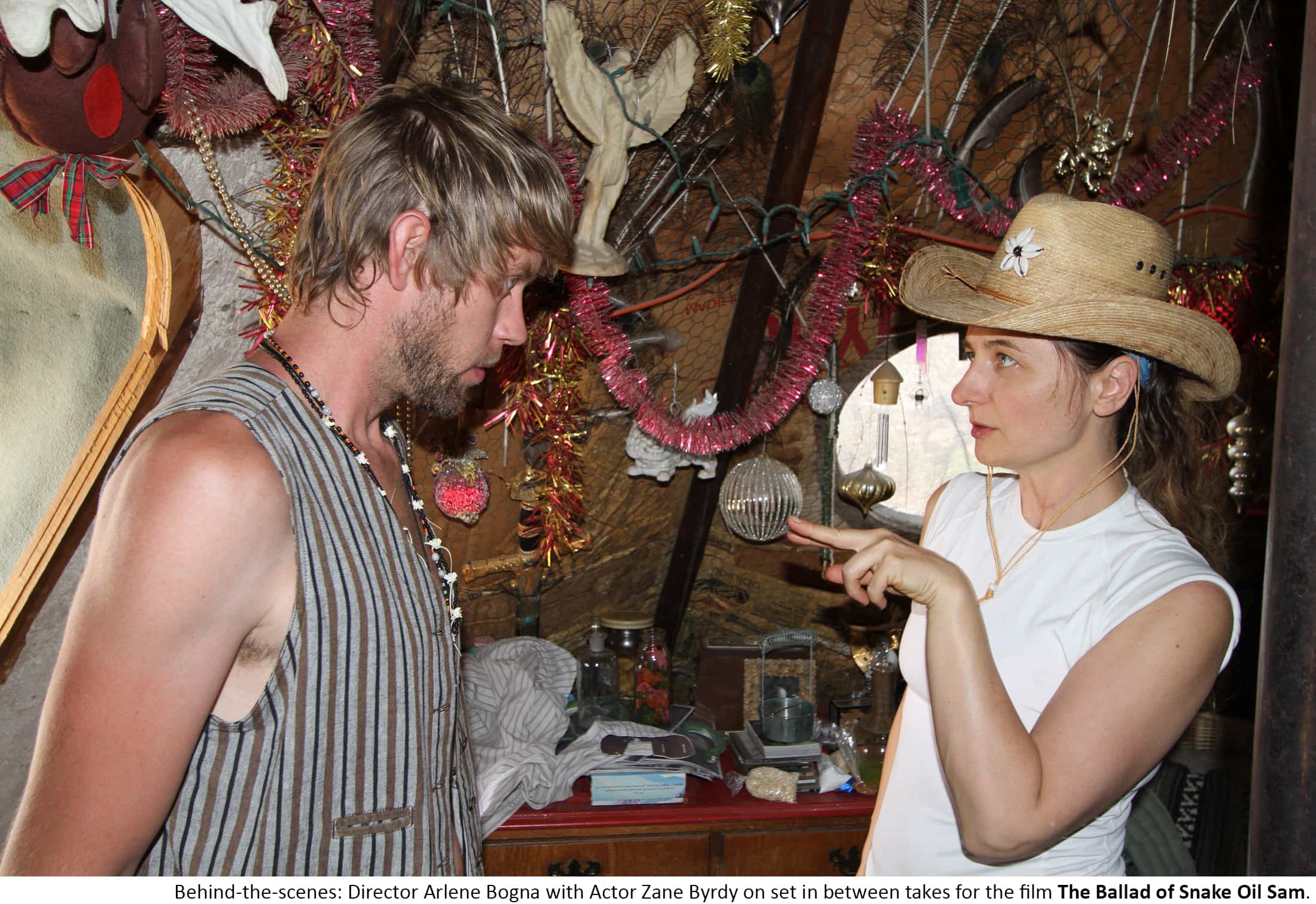 LA Female Director Arlene Bogna’s indie film, The Ballad of Snake Oil Sam, continues its journey to cinema screens in the Pacific Northwest at the 8th Annual Columbia Gorge International Film Festival in Washougal, Washington this August 2015. This festival was started by Angaelica, a non-profit organization rooted in the arts and ecology. They connect artists and collaborators to help projects be unique and extraordinary, and believe in the power of storytelling. Arlene’s short film was official selection at Filmets Badalona Festival in Spain, October 2014; it had 4 nominations at Madrid Int’l Film Festival. Arlene Bogna is a Powerful Female Voice in independent filmmaking today and gaining well deserved attention in the movie industry and film director communities. She is part of the “Support Women Filmmakers” movement and is in the Alliance of Women Directors, the only non-profit organization solely dedicated to education, support and advocacy for women directors in the entertainment industry.

Arlene’s production company, Vista Point Pictures in association with Jowharah Films is honored to have The Ballad of Snake Oil Sam as an Official Selection at these festivals worldwide, and recently in 2015 selected to be in Cinewomen Cahiers. The U.S. Premiere of this Arlene Bogna Film took place on May 31st, 2014 at Dances With Films Festival in the Chinese Theater, Hollywood, California. The Ballad of Snake Oil Sam made its debut screening on May 16th, 2014 to an enthusiastic reception at the Cannes Film Festival, Short Film Corner in Cannes, France. The filmmakers experience in France, provided them with a coveted filmmakers’ accreditation to the Cannes Film Festival; they were able to network at the Marché du Film, as well as the International Village with global financiers and distributors.

The Ballad of Snake Oil Sam captivates an audience of young and old alike, transporting you into the Wild Wild West with the inspiring mystical story of a desert traveler, inventor, alchemist and magical elixir salesman in pursuit of redemption. Emerging Filmmaker and Director, Arlene Bogna, had a unique vision for her undeniably daring, artistic and harmonious cast of actors to portray many emotional states of mind without words and to explore the meaning of trust, divine inspiration and the belief of redemption, relying solely on subtext and visuals. The Ballad of Snake Oil Sam pays tribute to Sergio Leone’s “Spaghetti Western” genre through the film’s moments-in-between-moments with the actors and frontier cinematography. The film, shot entirely on location outside of Joshua Tree, California, also is an ode to famous director, Michelangelo Antonioni, with its remote scenery of the desert wilderness reflecting Snake Oil Sam’s inner struggles. The director Bogna says, “Our film crew went on a desert camping adventure, braving all the elements together as a strong tribe, in order to make it all happen!” It features the music of Los Angeles psychedelic rock band, West Indian Girl, from their latest album Shangri-La. The film’s original score is by Acclaimed film composer, Vivek Maddala. The Ballad of Snake Oil Sam stars Zane Byrdy, Gladys Nyoth, Gabriel Voss, Cristina Balmores, and Eva Zeva.

While soaking up picturesque desert scenery, fantasy characters and frontier-dream images with a hippy like vibe is a story told mostly with no dialogue but only distinct emotional events. Truly a work of art, this Arlene Bogna Film will make your creative imagination soar and open it up to your own interpretation. The themes in the film keep you thinking about big life questions of trust; redemption and what will Snake Oil Sam do next? Hungry for more? The filmmaker purposely did this to bring in the character of Snake Oil Sam as a cameo in her next feature western, Amaryllis Bang! Bang! The director envisions her upcoming film productions to convey sweeping epic vistas, mind-blowing moments, and colorful dynamic shots. Arlene Bogna is ready to take this show on the road, and she already is.

“With its cool score, far-out set design, hip style and striking cinematography, The Ballad of Snake Oil Sam struck our judges as an upbeat and offbeat wallop of fun. We’re honored to screen it in our lineup. Best of luck for you continued success!” New Hope Film Festival Chairman, Doug Whipple. “Dances With Films is thrilled to present the exciting, exotic, hallucinogenic trip of the Wild Wild West from the highly creative mind of director/writer, Arlene Bogna and Producers, Romell Foster-Owens & Anthony Ferranti Jr., to the Hollywood Industry. An exciting envisioning of a story untold, this production promises a story that yearns to uncoil.” Dances With Films Fest Co-Founder, Leslee Scallon

The Ballad of Snake Oil Sam is an official selection and nominated for 4 Awards at the 2014 Madrid International Film Festival for: Best Short Film, Best Director of a Short Film, Best Music in Film and Best Costume. Bogna is planning to get international distribution of this film, on cable and digitally. View all film updates at www.TheBalladofSnakeOilSam.com Watch the trailer on Vimeo at www.arlenebogna.com/The-Ballad-of-Snake-Oil-Sam