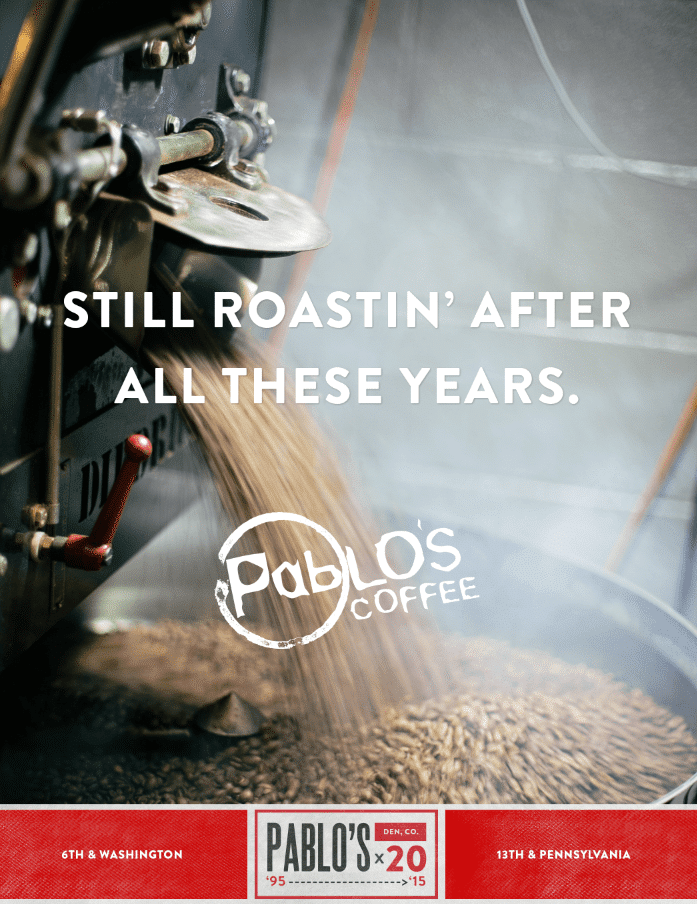 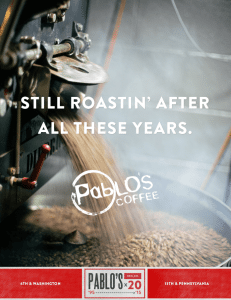 Denver, CO – Pablo’s Coffee, the venerable Denver coffee roasting company, is celebrating 20 years of caffeinating the community. To commemorate this milestone, Pablo’s is holding a celebration from September 21 through 25, with giveaways, throwback pricing, and a cake and ice cream social.

“I’m very proud to have worked with so many great people, and I’m lucky to have served such an amazing community for 20 years,” says owner Craig Conner.  “Personally, I don’t think we act a day over twelve.”

Conner founded the company in 1995, opening a scrappy punk-rock cafe in the Denver Center for Performing Arts.  Pablo’s soon became a gathering place for theatergoers, actors, artists, oddballs, and people of every description.  In 2001, the business moved across town and took root at the corner of Sixth and Washington Streets in the burgeoning Alamo Placita neighborhood.  In 2002 Pablo’s Coffee became one of Denver’s first roaster-retailers, crafting their beans in small batches in a corner of their shop.  When business exploded, the roasting operation was moved off site, and in 2012 the company opened a second location at 13th and Pennsylvania Street in Capitol Hill.  Pablo’s Coffee has also served as purveyor to dozens of other local businesses, including City, O’ City, Illegal Pete’s and Stella’s Coffee Haus, among many others.

Pablo’s Coffee has distinguished itself as a champion of the community they serve.  In 20 years of business, they have made thousands of charitable donations to local nonprofits, and for many years hosted a pancake breakfast to benefit the African Community Center, a refugee resettlement program. During the five-day festivities, $1 of every pound of coffee will be donated to this charity in an effort to continue their support.