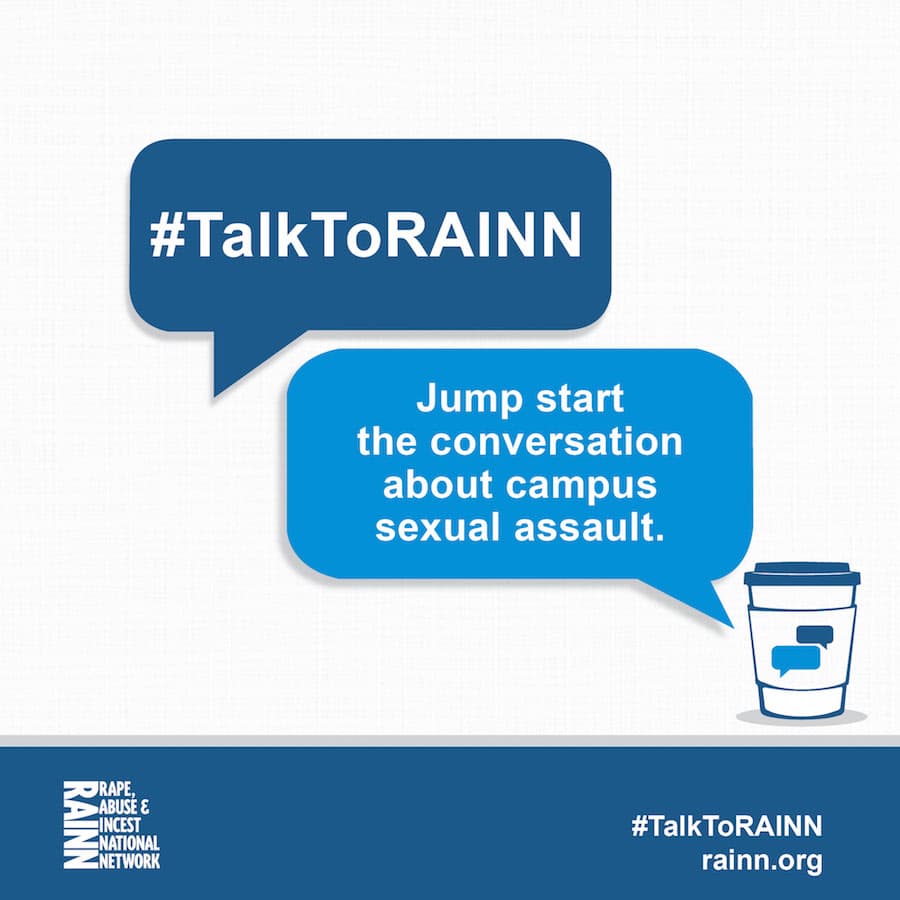 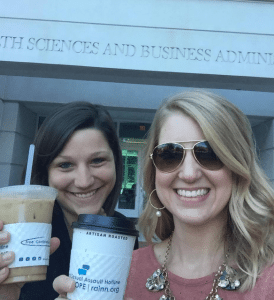 (September 14, 2015) — This fall marks the start of school, as well as another opportunity to raise awareness about sexual violence. This week, RAINN is launching #TalkToRAINN, a social media campaign that connects those impacted by sexual violence with the help they deserve, and spur conversations about sexual assault prevention.

More than 150,000 coffee sleeves featuring the National Sexual Assault Hotline (800.656.HOPE and online.rainn.org) will be distributed across 70 campuses nationwide. Student dining halls and campus coffee shops will replace their current sleeves with the #TalkToRAINN sleeves in order to spur a conversation about sexual assault and also connect people with help. By tagging @RAINN01 on social media and including the #TalkToRAINN hashtag, students can take action and extend the conversation beyond campus borders.

Students are already taking to social media to creatively spread the word and amplify the reach of #TalktoRAINN. Valdosta State University (VSU) students in Georgia created a “TalkToRAINN Selfie Challenge” to encourage their peers to take a “selfie” with their #TalkToRAINN coffee cup and spread the word about recovery resources.

“We are excited to be able to bring the #TalkToRAINN campaign to campus,” said Chelsea Wells Holcombe, health educator at VSU. “Our #TalkToRAINN ‘Selfie Challenge’ will spark students’ interest and get them excited and aware about the resources that are available to them.” 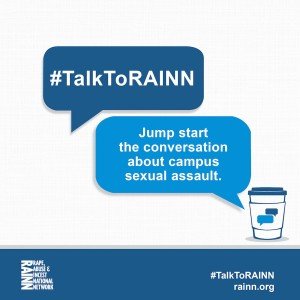 Erica Lesto, a student at Marymount University in Maryland and an officer for the mental health organization on campus, is highlighting #TalkToRAINN through coffee sleeves and art. “We want to make sure students know that help is available, and that it’s okay to reach out and ask,” said Erica.

Katherine Hull Fliflet, Vice President of Communications for RAINN, said: “We are excited to see so many students adapting #TalktoRAINN to fit their campus, and to see that they’re taking to social media to show their support for survivors of sexual violence by sharing the National Sexual Assault Hotline.”

As the #TalktoRAINN campaign encourages those impacted by sexual violence to reach out for support, RAINN is also releasing a new series of videos for people who are considering reaching out. These videos feature members of RAINN’s Speakers Bureau, along with staff from the National Sexual Assault Hotline, and highlight how the National Sexual Assault Hotline can provide support over the phone (800.656.HOPE) or via online chat (online.rainn.org). A Spanish-language video showcases the Spanish-language Online Hotline services that were launched this spring, with support from the Justice Department’s Office for Victims of Crime.Carolina

Danielle Castellucci, a survivor featured in the new video, talks about her experience using RAINN’s Online Hotline, saying, “Simply hearing one person tell me that they understood made all the difference.”

You can help raise visibility of the issue and connect survivors with support.

Join the conversation and share resources on social media with #TalkToRAINN.
Sign up for the latest news about RAINN’s work to address sexual assault on campus.
Request print materials to share at your next event to raise awareness of sexual assault.
If you or someone you know has been affected by sexual violence, it’s not your fault. You are not alone. Help is available 24/7 through the National Sexual Assault Hotline: 800-656-HOPE and online.rainn.org, y en español: rainn.org/es.

About RAINN
RAINN (Rape, Abuse & Incest National Network) is the nation’s largest anti-sexual violence organization and was named one of “America’s 100 Best Charities” by Worth magazine. RAINN created and operates the National Sexual Assault Hotline (800.656.HOPE and online.rainn.org) in partnership with more than 1,000 local sexual assault service providers and operates the DoD Safe Helpline for the Department of Defense. In 2015, the Online Hotline expanded to offer services in Spanish at rainn.org/es. The hotlines have helped more than two million people since 1994. RAINN also carries out programs to prevent sexual violence, help victims and ensure that rapists are brought to justice. For more information about RAINN, please visit rainn.org.

The #TalkToRAINN coffee sleeves and “All the Difference” video series were produced by RAINN under cooperative agreement #2014-XV-BX-K004 and #2014-XV-BX-K005 awarded by the Office for Victims of Crime, Office of Justice Programs, U.S. Department of Justice. The opinions, findings, and conclusions or recommendations expressed in these are those of the contributors and do not necessarily represent the official position or policies of the U.S. Department of Justice.