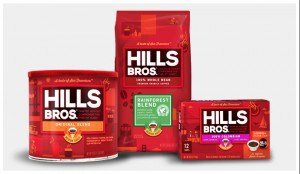 Historic Coffee Brand Refreshes Packaging Across Can, Single Serve and Bag Offerings
(September 2015) – Hills Bros.® Coffee is rolling out a new look this fall that pays homage to the brand’s San Francisco heritage, while generating positive attention among consumers.  The refreshed design returns to the vibrant red that earned Hills Bros. the national nickname “The Red Can Brand” from the 1930s to the 1960s, and features cheerful illustrations of Bay Area icons and landmarks as well as a new tagline – A Taste of San Francisco™.
“Not only did the Hills Bros. brand originate in San Francisco, the Hills brothers exemplified the growth and ingenuity of that era in San Francisco with innovations in roasting and packaging that shaped the U.S. coffee industry for over a century,” noted Sarah Cunningham, senior brand manager of Hills Bros. Coffee.  “Our redesign reconnects the brand to the energy and craftsmanship that made Hills Bros. Coffee a national favorite.”
The Hills Bros. brand started from humble beginnings in 1878, a small storefront within the Bay City Market, and grew to national acclaim.  Cunningham said, “The new package features an additional tagline – Crafted without compromise for over 137 years™ -which highlights both Hills Bros. longevity and commitment to quality.”   The bayside factory that once packaged millions of pounds of Hills Bros. coffee still remains a recognizable landmark of the San Francisco skyline.  Cunningham added, “The font we chose for the updated Hills Bros. logo links back to that roof top signage on the Harrison Street building.”
Early feedback from retailers and consumers indicates the new packaging is a positive step for the brand. “The initial response from consumers has been terrific,” said Cunningham.  “The package grabs attention at the shelf and consumers appreciate how easy it is to find their preferred variety across the different offerings of canned coffees, bagged coffees and single serve coffees.  Consumers also play back that the new look is fresh and happy – the perfect way to describe Hills Bros. Coffee.”
Hills Bros is available at local grocers and online at www.mzb-usa.com and amazon.com.