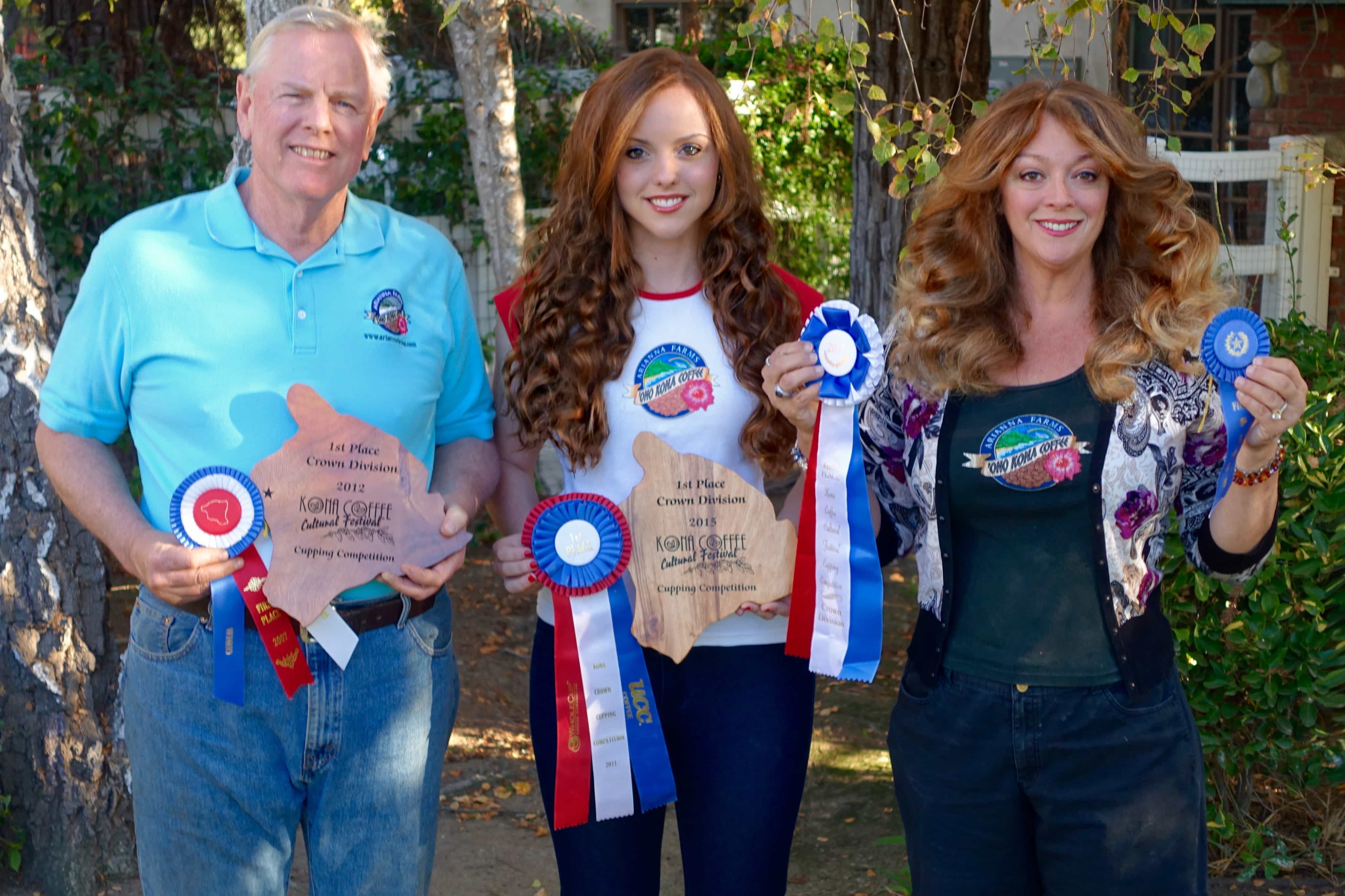 Arianna Farms ‘Ono Kona Coffee® won First Place for the fourth time in the 2015 Kona Coffee Crown Cupping Competition, the prestigious event held every November at the Kona Coffee Cultural Festival. Farms from throughout the Kona region entered the competition, presenting 1,000 lbs (454 kg) of green coffee from which competition officials selected a random 5 lb (2.27 kg) sample. An international panel of professional judges cupped the coffees several times over a two-day period, narrowing the field until the final winner was selected. The Estate Arianna® coffee won the Festival’s inaugural Crown Cupping in 2007, again taking First Place in 2011 and 2012; after placing third and second the subsequent two years, they were delighted to again capture the coveted First Place win this year. Owners/Managers Sharon, Robert, and Arianna Wood attribute much of their coffee’s success to the special care given at each step, following their farm motto From Farm to Cup®. Arianna, the farm’s namesake, planted her first Kona coffee tree at age three and has attended cupping classes for several years; now 18, she is involved in every aspect of the business from modifying the farm’s herbicide management to business planning. Arianna notes, “Our Kona coffee is 100% hand-picked, wet milled in small batches in our low-water mill, and then hand-raked hourly to dry on the hoshidona drying deck,” Arianna says. Her parents, Robert and Sharon, fell in love with Kona on their honeymoon, and the family emphasizes sustainability and being good stewards of the land. Located on the verdant slopes of Hualalai Volcano, this winning farm is in the historic Kona Coffee Belt where Kona coffee first began. The family’s ongoing focus on quality continues, including Sharon passing the Q-Grader test in 2011 and Robert developing a variety of standards-based projects.

In addition to its outstanding cup quality, Arianna Farms is in the forefront on important environmental issues, many of them led by Arianna Wood. She initiated the farm’s Native Hawaiian Plant Restoration Program when she was only 10 years old, after learning about the plight of native birds at a Specialty Coffee Association of America conference. “The goal is to increase native Hawaiian plantings not only because these precious plants are scarce,” she notes, “but because they provide bird habitat that we can all work together to eventually link to the higher elevations where the native birds are now located.” The farm incorporated the research results from her 1st Place award-winning 2011 State Science Fair research, which found a cost-effective way to maintain the same weed-killing ability while reducing conventional herbicide use by half, and quadrupling the effectiveness of an organic herbicide. This focus on environmental improvement began with her parents—who started the farm in 2000—including carefully preserving a 100 year old grove of coffee trees and installing an extensive solar-powered energy system at their coffee mill and farm. With one of the largest grafted Kona coffee tree nurseries on the Big Island, grafted for nematode resistance, they supply all of their own farm’s trees, as well as selling to many other farms. “Every detail matters, literally from the ground up,” says the family, adding, “We want people to taste the magic of Hawaii From our Farm to your Cup®.”