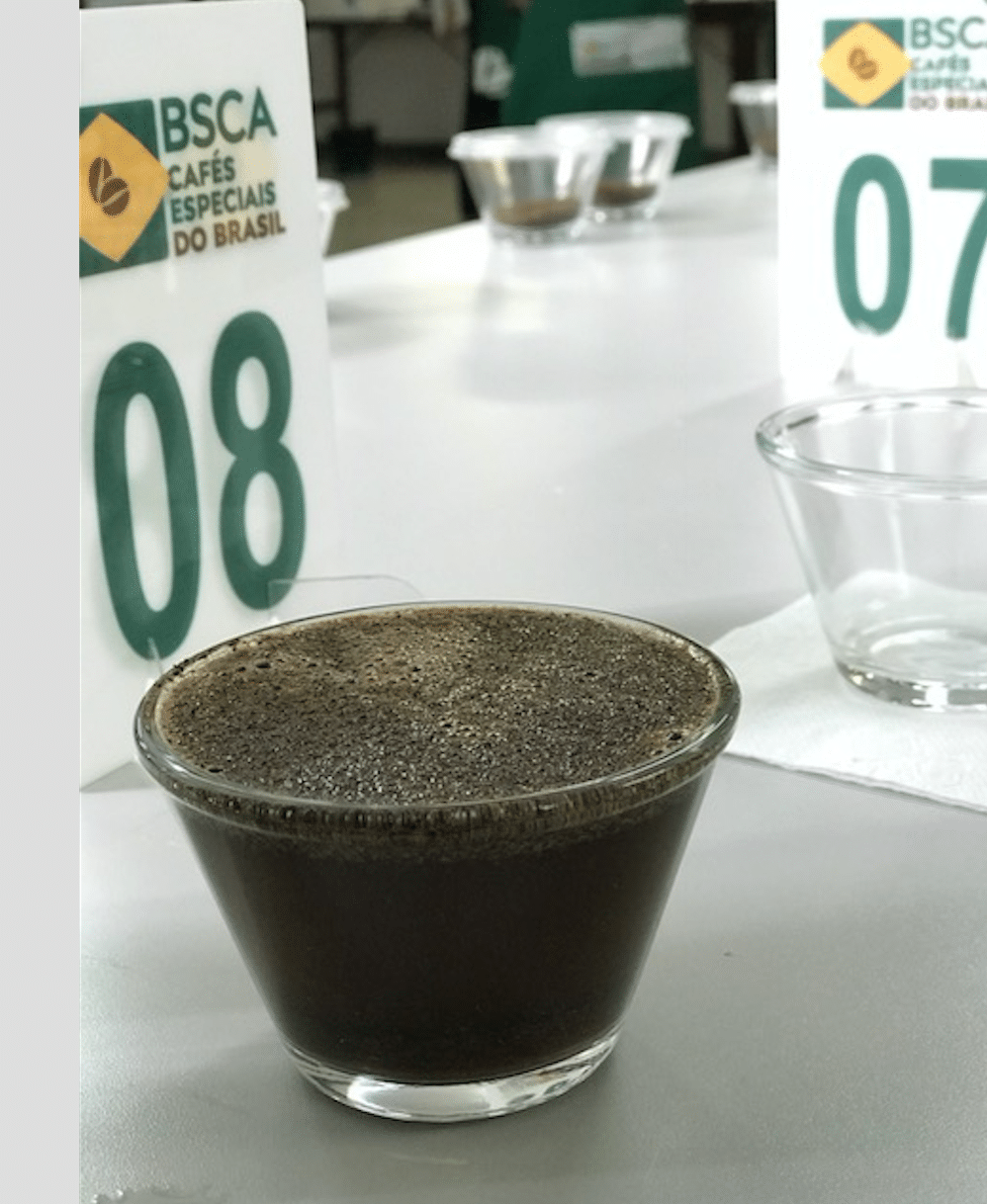 In an auction where all of the lots were sold within 8 minutes of the open, Gabriel Nunes received almost $100,000 for 793 pounds of coffee and now holds the all-time record for a Cup of Excellence price. Two groups of bidders from several countries will share the top coffee. Maruyama Coffee, Campos Coffee, Sarutahiko Coffee, Times Club Coffee, Proud Mary, and Coffee Libre outbid their rivals for the chance to own the winning lot from Fazenda Bom Jardim.

This lot is unique not only in the location of the farm- Patrocinio- but that it had scored a whopping 92.3 points by the international jury due to its unusual flavor characteristics. Gabriel Nunes, 28 years old and the third generation of the coffee family explains, “In the past we produced volume; today we balance the social, environmental and financial pillars of our farm. Planting is about ensuring quality, making the correct soil management in order to reduce the use of inputs, having environmental awareness and also understanding what the marketplace seeks. Nunes coffee farms are in a privileged region, with ideal altitude and little rainfall during the harvest. We continue to invest in technology, improve handling and also to experiment with some controlled fermentations to improve our coffees.”

The winning coffee was indeed an experimental process and Gabriel Nunes, a recent agronomy graduate chose a yellow bourbon-pulped raisin process for the competition. He describes how the coffee lot was created, “At the ideal point of maturation, we harvested the best cherries by hand, put them inside a truck bucket and let the truck rest in a local forest to cool down for 36 hours, achieving anaerobic fermentation. After that we pulped the fermented raisins and dried them on raised beds.”

“This is an extraordinary result for Brazil and for our producers who work so hard and have been focused on quality improvement for many years,” exclaimed Vanusia Nogueira, Executive Director of The Brazil Specialty Coffee Association. “We are thrilled to offer these fantastic coffees to the world and we thank those who had the vision to create Cup of Excellence in Brazil with the Gourmet Project so many years ago.” Cup of Excellence was founded in Brazil in 1999 and now showcases many other countries best coffees as well as Brazil.

This was the 18th auction celebrating Brazil’s best coffees. This auction not only broke the previous average record of $8.96lb for their Pulped Natural coffees but with an average of $12. 75lb. broke the record of $12.47lb for the Naturals. The winning Naturals will be auctioned next week on December 7th. All but five of the lots received at least $8.00lb which is multiple times higher than average specialty prices. The top 90 scoring coffees were split into two lots for the auction. All of the 24 auctioned coffees had scored at least 86 points by both the national and international juries.

Even top governmental officials are celebrating. “Apex Brasil is very proud of the success achieved by Nunes Coffee Farm in the COE competition and feels rewarded for supporting such an important event for Brazil and the whole coffee world,” indicated Claudio Borges, Sector Projects Manager – Apex Brasil.

“It was so exciting to witness the young son of a well-established coffee family accepting the top honor. This just proves once again that there is much more possible from Brazil’s coffees than what most companies still expect,” indicated Susie Spindler, Co-founder and Executive Advisor to The Alliance for Coffee Excellence. “It has been awesome to be a small part of so much innovation and quality improvement coming from Brazil’s often small farmers and I am humbled to have been invited this year to celebrate at the awards ceremony in Venda Nova do Imigrante”, she continued.

About Alliance for Coffee Excellence & Cup of Excellence®
Alliance for Coffee Excellence is a non-profit global membership organization dedicated to advancing excellence in coffee. Cup of Excellence, a program which gives out the most prestigious award in coffee, has affected thousands of farmers. Its unmatched focus on quality discovery, farmer premiums and transparency has changed the specialty coffee industry. For more information about 2018 membership and to register for an international jury, samples of the winners and the auctions log on to allianceforcoffeeexcellence.org. The final 2017 Cup of Excellence auction is scheduled for December 7th. The National winners will close for bidding on December 9th.