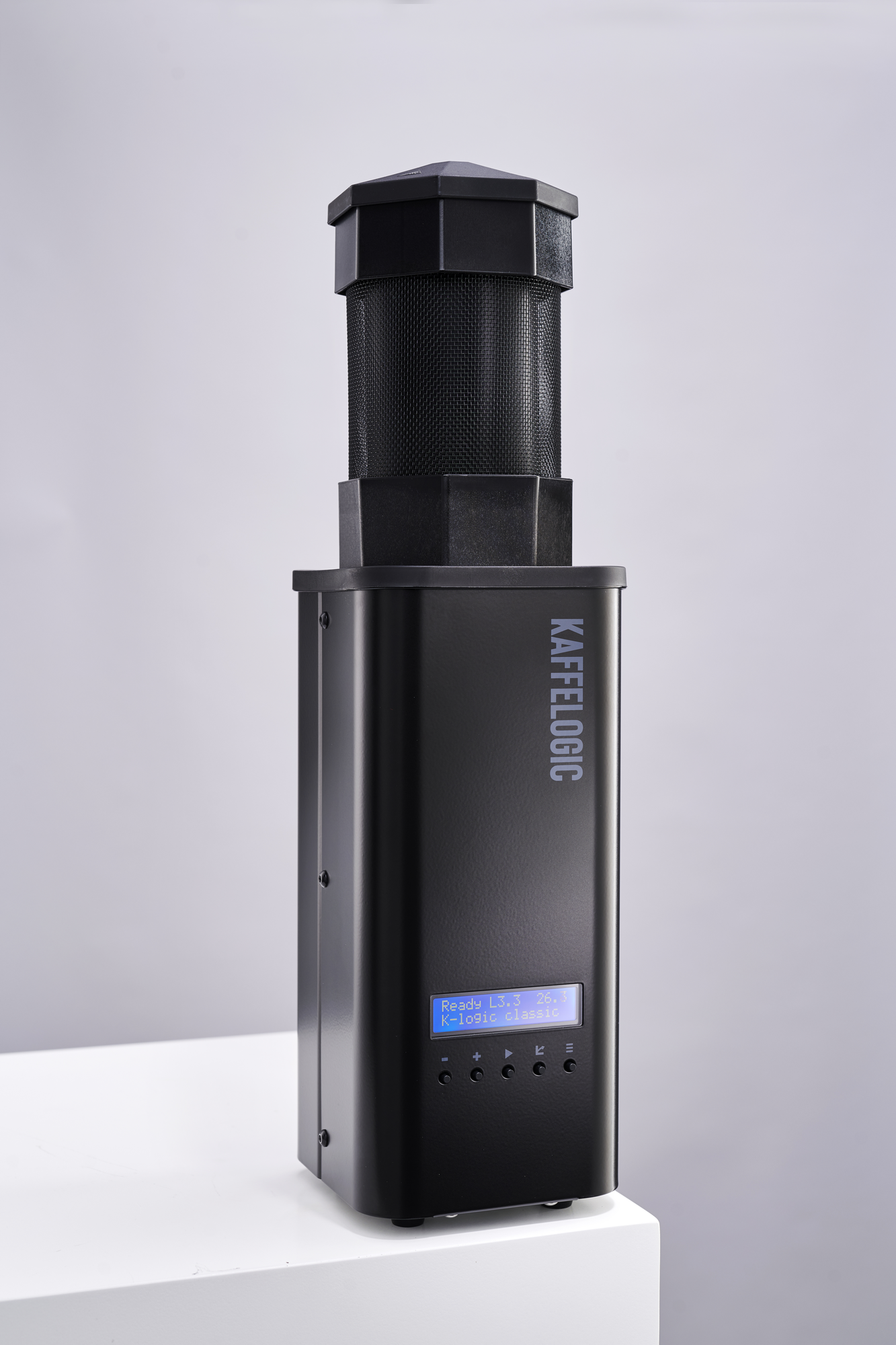 A team from New Zealand have become the first to create a coffee roaster using a software system they have dubbed ‘human intelligence’ and the first to promote the concept of immediately ready to drink roasting. The Kaffelogic Nano 7 benchtop coffee roaster is smashing some preconceived notions that the industry has long held dear.

Human intelligence
Watch a human master roaster at work. You will see an intense concentration as they follow the roast, looking, listening, and smelling for cues as to what adjustments to make. They continually make small adjustments to keep the roast on course or to anticipate events that they know will need different amounts of energy or air.

Now imagine that you can watch a typical roast automation system at work. These systems use a methodology known as PID, which stands for proportional, integral, differential control. It is a system that is widely used for control of all sorts of things from electric kettles to heat pumps. As soon as the system detects a departure from the set temperature it applies a correction to the heat source. Coffee roasting PID systems function most of the time, but don’t always respond well to the constantly changing set temperature of a roast profile, and don’t anticipate specific events in the roast such as the first crack. It’s actually a system designed to maintain a constant temperature shoehorned to deliver a constantly changing temperature.

Chris Hilder, the engineer behind the Kaffelogic roast control system, threw out temperature based PID claiming it is not ideal for coffee roasting. He has built a new roast control system, based on studying the human master roaster at work and mimicking their process in software. This means looking at where the roast is headed and comparing it to where it should be headed, not just looking at the current temperature. It also means the ability to specify interventions during the roast for known events. This eliminates some of the traditional PID responses that actually damage the flavour. Chris describes the system he has developed as ‘human intelligence’ because it incorporates the artisanal knowledge of the master roaster into the control system. Wayne Burrows, the profile designer behind the Kaffelogic system, puts it like this: “I have found that fewer and smaller interventions work better on the overall roasting outcome. It is as if the Nano 7 knows how to roast coffee and should be allowed to get on with the job”.

Wayne has often found that professionals are sceptical about the quality of the coffee roasted in a Kaffelogic, until they get to taste it. He says: “Not only do they like the flavour of the coffee, but they like how well it transfers to their production drum roaster through the Kaffelogic Studio roast development system.”

Ready to drink
After the coffee has been roasted it is normally left to ‘rest’ for a minimum of 3 days before consumption. This allows CO2 gas to escape from the beans, and for the flavour to further develop. This is another dearly held tenet of coffee roasting that the Kaffelogic team are turning on its head. As John Robson, marketing manager for Kaffelogic, says: “When friends come around you don’t want to wait three days to make them a coffee. That’s why we have developed a set of ready-to-drink roasting profiles.”

How is it possible to roast coffee so that it doesn’t need resting? Wayne Burrows is a little reluctant to give too much away about how he does it, but it comes down to tweaking the temperature profile to drive off the CO2 during the roast, and to fast track flavour development to the point where it is ready to drink straight out of the roaster. With fine control of both heat and air apparently it is possible.

Does it matter? The home user will certainly appreciate the convenience of being able to roast on demand. I guess it’s a no-brainer there. The professional user who is developing a new roast profile for a customer or a specific micro lot also benefits when they can taste the coffee straight off the roast. That makes the whole process go so much faster and that’s a definite benefit for a business.

Does it work? Looking at the Kaffelogic community forum posts it is clear that it does – to an extent. There are some users who find the coffee still tastes better after 24 hours of resting, although it is still drinkable straight off the roast. There are other users who develop their own roast profiles and won’t give the ready to drink profiles the time of day. But there are a lot of users who swear by the ready to drink profiles and report fantastic results with them on all sorts of coffee, including some very good specialty coffees.

Kaffelogic roasters have been available in Australia and New Zealand since 2019. They are currently available to the rest of the world through a Kickstarter project, but not if you’re in the USA or Canada. The 110V version is planned for release in mid-2021.

Have you ever wondered what goes into...