On Monday, the Sioux City Council approved the second reading of a municipal code amendment allowing Coffee & Purrs, a proposed cat café, to open in the Commerce Building, 520 Nebraska St.

The council voted 4 to 0 in favour of a zoning text amendment that would amend the definition of animal boarding to allow cats to stay overnight in the cat café. Councilman Alex Watters, who voted in favour of the first reading, was not present. The café will become a reality only if the third and final reading is approved.

Customers would be able to interact with cats in a separate area from the coffee shop. It would be located in the brick building’s commercial space, beneath the Bluebird Flats’ 71 apartments.

Megan Thompson, the cat café’s owner, clarified that she would like to have a maximum of 40 cats in the cat room, a separate area where patrons can pay to cuddle with cats.

“We’re looking for between 15 and 30. We do not need to keep 30 cats in there at any given time, but I would estimate that is the maximum number of adult cats we can keep in there “Thompson remarked.

Councilwoman Julie Schoenherr asked Thompson if the cats in the 785-square-foot cat room would have their own kennel to sleep in at night. Thompson replied that the cats would sleep on the room’s beds and couches.

Mayor Bob Scott inquired about the ventilation system Thompson intends to instal in her business, noting that cats have a “very distinct odour.” Thompson stated that each room will have its own HVAC system.

“To keep the smell at bay, we will clean on the hour,” Thompson explained, adding that an employee will come in the morning to deep clean the concrete floors and area rug.

Animal boarding is currently defined as the keeping of animals for profit in the Downtown Commercial zoning district. The proposed text amendment to the zoning code would amend the definition of animal boarding to allow cats to stay overnight in the cat café. However, the change would allow pet stores to sell or adopt animals downtown, but animal boarding and breeding would remain prohibited.

Preston Moore, the Humane Society of the United States’ Iowa state director, told the council that he strongly recommends that the city work with Thompson to open the cat café. He urged the council, however, not to adopt language that would allow commercially bred dogs and cats to be sold in downtown Sioux City. Pet shops that would almost certainly spring up as a result of such code changes would sell animals obtained from puppy and kitten mills. 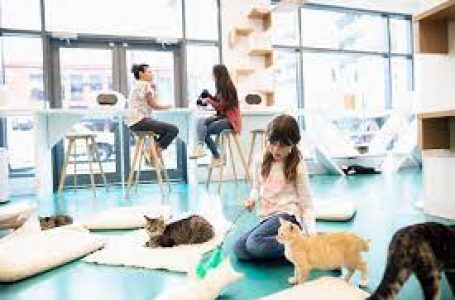 Cat yoga just one of the menu... 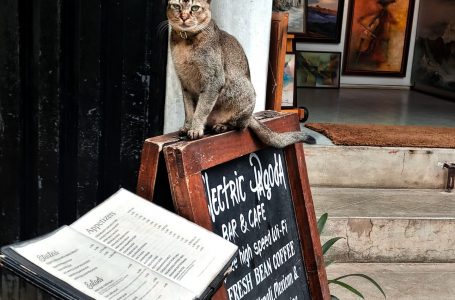