Turkish Coffee Stories from Anatolia,” a documentary prepared by the Turkish Coffee Lady Foundation for the promotion of Turkish coffee – the world’s first coffee brewing technique – will be promoted with comprehensive events held in Los Angeles and San Diego in the United States as part of “Turkish Cuisine Week” and a world tour. The documentary, which is a groundbreaking example of gastrodiplomacy, aims to raise awareness abroad of the gastronomic and historical significance of Turkish coffee.

Hasan Kale, a renowned Turkish artist whose micro art involves transforming the smallest and most overlooked objects, will exhibit cultural presentations of Turkish coffee, which has a 500-year-old cultural heritage.

Turkish Airlines (THY), Kütahya Porselen, and leading local Turkish American associations are among the other sponsors of the documentary, which was produced in collaboration with the Presidency for Turks Abroad and Related Communities (YTB) and with the support of Arzum Okka, the electronic Turkish coffee maker brand.

The event, which will be hosted by the Turkish Consulate in Los Angeles on May 20, will feature notable figures from the gastronomy industry, the Turkish American community, the press, and the arts and culture.

Documentary and art events, which will also be shown at the Turkish Festival in Long Beach, organised by the Association of Turkish Americans of Southern California (ATASC) on May 22, will meet American coffee lovers in San Diego on May 24-25 in cooperation with the House of Turkey, a San Diego-based nongovernmental organisation (NGO).

This influential project, which brings together the leading public, private, and non-governmental institutions, aims to introduce how the coffee culture that spread from Istanbul 500 years ago changed the world, as well as the fascinating histories of the different coffee cultures that have existed in Anatolia for centuries.

The documentary was filmed in various Turkish cities, including the capital, Istanbul, to highlight the significance of gastro diplomacy.

To convey the coffee traditions and culture of Turkey, the documentary explores dibek coffee in Mardin, myrrh in anlurfa, menengiç, also known as pistachio coffee, in Gaziantep, saffron in Karabük, coffee on embers in Nevşehir, coffee in the sand in Ankara, coffee with mastic gum in Izmir, and traditional Turkish coffee in Istanbul.

The documentary was produced by Selen Almaç Deniz in collaboration with Cinec Film, Broccoli Production, and Karen Production, with Cihat Bilen and Mehmet Ismail eçen serving as directors.

“Turkish coffee is a cultural treasure that is unique in the world. Even though 400 million cups of coffee are consumed daily in the United States, not enough is known about the cultural significance of Turkish coffee. “We need more effective promotion of our 500-year-old coffee culture and its historical significance, which has played a major role in the global spread of coffee culture through interpersonal communication,” said Gizem alcgil White, the founding president of the Turkish Coffee Lady Foundation.

“We hope to raise awareness about the value that our rich coffee culture has added to the world and to be able to identify Turkish coffee abroad. Through artistic presentations, we will highlight the historical significance and distinctive flavour of Turkish coffee.” 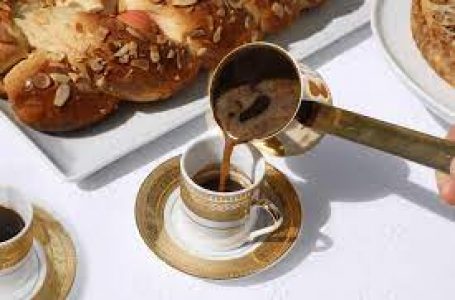 The Ideal Water To Coffee Ratio For...