Smart Planet Technologies, which makes a coating that reduces contamination during the fibre milling process, claims that their product has been used in numerous countries. However, the United States’ expansion has been constrained by a number of issues.

Smart Planet, based in Newport Beach, California, was founded a decade ago with the goal of developing recyclable packaging materials. The business quickly shifted its attention to barrier coatings, often known as poly coatings.

Manufacturers of single-use coffee cups and other fiber-based foodservice goods in Australia, Europe, and worldwide are increasingly using the product. According to Smart Planet officials, this feature enables a cleaner recycling process, especially at the mill level.

“Despite that, the United States has proven to be pretty tough for us to advance in,” said Chris Tilton, Smart Planet’s chief technology officer. “A lot of it is due to a lack of communication between the recycling and packaging industries. Some of it is simply aversion to change.”

He and business CEO Will Lorenzi discussed the coating, its recyclability characteristics, and its recycling possibilities.

‘An industry-wide issue’
“Because there has been such a historical contamination problem,” Tilton said, the business first restricted its emphasis to poly coating. “The recycling sector struggles to sort out and deal with these sorts of papers,” he continued. It truly creates an industry-wide issue.”

Poly coatings are used as a protective barrier in foodservice goods. The coating adds insulation and structural strength to coffee cups.

Some paper mills accept fibre materials having a poly coating. According to the American Forest & Paper Association (AF&PA), poly coated products are accepted by 30 mills in the United States and Canada. Because the underlying fibre is generally of excellent quality, there has been a push for broader adoption in recent years. WestRock, for example, manufactures a cup stock manufactured from high fibre grade solid bleached board (SBS).

Traditional coating treatments on materials, on the other hand, might contaminate the recycling process.

“The coating does split during pulping, but the coatings are extremely light, lighter than water, so when they separate in the pulper, there are huge flakes of plastic that separate, but they go ahead and the contamination happens in the screens,” Tilton said. “The plastic particles contaminate, block, and clog the screens, causing confusion and disarray in the screening process.”

Smart Planet looked at how it might maintain the benefits of poly coatings that package manufacturers want while avoiding plastic contamination in the fibre recycling process. EarthCoating is a mineralized polythene or other polyolefin barrier created by the firm, according to Tilton. This has an effect on how it behaves throughout the pulping process.

“We’ve significantly mineralized it, up to 51 percent,” Tilton said, “so when the coated papers go in, they perform everything a typical 100 percent plastic coating does in terms of usefulness and function, but in the pulper, they detach off the fibres instantly, or almost immediately.” “And, since minerals are so heavy and dense, the coating breaks down into very tiny particles, which wash out of the pulper harmlessly.”

He compared the idea to the additives used in other paper goods. Fillers composed of calcium, talc, carbon, or other minerals, for example, are used in some papers to make them smoother or more opaque.

“That is not a contaminant to recycling,” Tilton said, “because the minerals just break off of the fibres and wash out.” “What we’ve done is taken that process, in which those fillers process in a safe manner, and incorporated those qualities into the coating.” 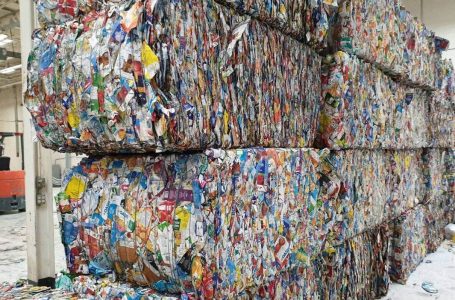