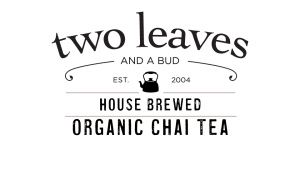 Innovation in Chai Tea: Two Leaves and a Bud
Tea Company shakes things up with a Big Tea Bag

Basalt, Colo., February 2017 — Two Leaves and a Bud Tea Company is excited to bring its award-winning chai tea to cafes in a new way: House Brewed Organic Chai Tea is a simple, one-ounce Big Tea Bag used to fresh-brew a 1:1 concentrate, or “Strong-Brew,” for house made hot or iced chai tea beverages.

“These Big Tea Bags allow coffee shops to offer a freshly steeped Organic chai that’s super simple to prepare and cost effective. The cost per serving is less than half of the cost of the popular liquid chai concentrates on the market,” says Two Leaves and a Bud founder and CEO Richard Rosenfeld.

“Shipping all of that heavy liquid around is not environmentally friendly, it’s expensive, and once you open those containers, it has a short shelf life,” says Rosenfeld. A shelf-stable case of House Brewed Organic Chai Tea weighs less than two pounds and includes 24 filter bags, yielding a total of 80 or more lattes.

Unlike the vast majority of popular liquid concentrates, House Brewed Organic Chai Tea has no sugar or preservatives. This is significant because consumers are increasingly cutting back on sugar and are wary of artificial sweeteners. “With our House Brewed Chai, a cafe can now offer an Unsweet Chai Tea Latte and customers can sweeten the tea how they like,” says Two Leaves and a Bud marketing manager Christy Garfield.

The inspiration for House Brewed Organic Chai Tea came from a cafe owner who told Rosenfeld she had been steeping the Two Leaves and a Bud chai tea sachets and customizing the resulting brew with syrups and sweeteners to make her own Chai Tea Lattes.

“We come across more and more cafes that want to craft their own beverages because that appeals to their customers,” says Garfield. “So we’re offering them a true chai tea base to create their own custom Chai Tea Lattes. Maybe they sweeten it with a touch of local honey or organic agave, or perhaps spice it up with fresh ginger.”

Thus far the company has received universally positive feedback from cafe owners about the simplicity and flexibility of House Brewed Organic Chai Tea. “Our cafe customers are already reporting nice profits and customer satisfaction,” says Garfield. “They’re even sending us their recipe ideas – like The Lumberjack Chai Latte sweetened with real maple syrup!”
About Two Leaves and a Bud Tea Company…

Two Leaves and a Bud is an independent tea company specializing in top quality organic and fairly traded tea in whole leaf tea sachets, iced tea, loose leaf and teabags, from its Paisley Label Tea collection. Founded in 2004 in the small mountain town of Basalt, Colorado, Two Leaves has built an international reputation for being the premier source for the highest quality organic teas. From the start, founder Richard Rosenfeld focused on developing strong relationships with organic tea farmers from whom the company sources small quantities of tea each growing season. The company is named for the part of the tea plant (Camellia sinensis) plucked by hand to make the world’s best tea, and has built a grassroots following by “taking tea personally” — connecting tea lovers to the teas they love and introducing new tea drinkers to truly great tea. For more information, visit www.twoleavestea.com.