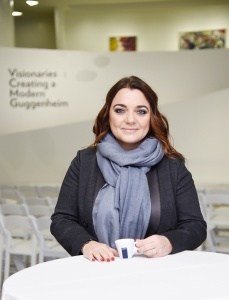 This marks the fourth exhibition sponsored by Lavazza Premium Coffee, Inc. at the Guggenheim Museum in New York, which officially opened to the public on February 10th, and runs through September 2017.

The “Visionaries” exhibition activation began at night on February 8th with an exclusive dinner in the Guggenheim rotunda attended by Francesca Lavazza, Guggenheim Trustees, and museum donors. The opening events continued the morning on February 9th, in light of the snow, with a Lavazza-fueled Instameet for art and lifestyle influencers, followed by a media preview.

Lavazza, as both a company and a coffee brand, embraces creativity and innovation particularly within the world of arts and culture. Lavazza helps to sustain major exhibitions within the most important cultural institutions worldwide with a strategic focus on supporting the arts from a global scale. Other cultural partners and projects include the Hermitage Museum in St. Petersburg, the long-running Lavazza Calendar project, and the soon-to-be-announced Peggy Guggenheim Collection in Venice.