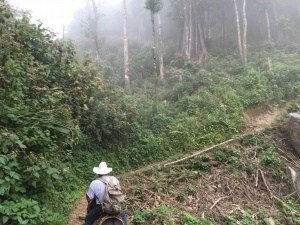 Lesly Bronfield’s dream to produce his own coffee did not start with any amount of money, any plot of land, or any substantial experience in the coffee world. This dream simply started with Lesly’s appreciation for the beverage and his love for his home, the beautiful Cortes region of Honduras. I would have said that the realization of his dream was unlikely, but I would have said that before meeting Lesly. We became friends while working as baristas at Brooklyn Roasting Company in the Dumbo neighborhood. Lesly stood out from other new hires because he didn’t just like being a barista. He was there to learn about the industry and to work his way into the competitive world of specialty coffee.

Lesly’s story starts when he was 19, fresh out of high school and short on money for college. He started bartending and working at the Brooklyn flea market where he tried coffees from various specialty roasters in the New York area. When he was initially unable to get his foot in the door with a big-name roaster, Lesly decided to start from the ground up, literally. He had the idea while walking home in the snow one night in Sunset Park. He had just spent his last cash on a small coffee from a bodega and was brainstorming how he could work his way into the industry. “I’ll just buy a coffee farm!” he thought. How hard could it be? (Surprisingly to me, Lesly actually did make it sound easy). Three months later, Lesly had saved enough money to buy a 120 acre farm in Honduras for $5000 (I know it sounds crazy. I had to double check with him on the price myself). The farm is only an hour away from where he was born.

After making the purchase, Lesly did not see his land for another year. He used some of the money left over to study agronomy and coffee production with some acquaintances in the Dominican Republic and Nicaragua. He studied varieties he wanted to plant and the infrastructure he would build for specific processing methods. His dream was starting to take shape.

When he was 20 years old Lesly finally went to see his farm. He brought two pounds each of Bourbon, Catimor, and Caturra, varieties of green coffee beans (seeds) to plant. He also hauled in materials to build a nursery for the new plants and to build a small bunk house with a stove and running water. This was for the farm manager and workers who are now tending to the farm while he is in New York. Lesly later recounted to me that the first night he spent on his land, he slept on the ground between a tree and a small campfire. He woke up in the middle of the night and felt the happiest he has ever felt in his whole life. I imagine that’s the feeling of realizing that you can create your own success. Today Lesly works two jobs in New York to support his farm. 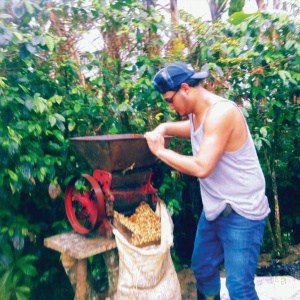 A few months ago I had the chance to visit the farm from where I was working in Costa Rica. Two buses, a car, a truck, a horse ride, and a hike later I arrived at the farm, “Far Away Down.” All along the way Lesly’s story came to life in a whole new way. Each part of his journey seemed more difficult after seeing the trek first-hand. And his uncle made sure to remind me what a big project it was. “Lesly did this part on foot.” “Lesly carried in all these materials himself.” “Lesly planted this whole hectare and carried in all the seeds for the nursery.” After the visit, I spoke with Lesly on the phone about how shocked I was that he put all that together. He just laughed and said, “That place is my baby.”