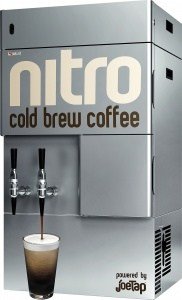 It is clear that cold brew coffee is beyond trending. The question now is not whether or not to offer cold brew but how to profit from it. For those brewing in-store, there are a plethora of brewing and dispense methods available in print and online. In short, this is most of what you need to know in less than a hundred words.

Step 2. Experiment with different coffees, grinds, brew times and filtration. The Internet is chock full of helpful articles, guides and Youtube videos to help you. You will even find some secrets to making nitro cold brew.

Step 3. Do some research and learn how to install/convert an under counter refrigerator to a kegerator or purchase a new kegerator for cold brew coffee dispense. It looks hard but it isn’t.

Step 4 Do in-store marketing and sell your product.

Let’s look at the product side first. Brewing your own in-store is enjoyable and is a great revenue stream. From a business perspective however, you may consider not brewing your own for a lot of reasons. In-store brewing can actually be more costly versus buying a concentrate. Brewing your own means labor costs and long brew time (12-20 hours), refrigerated storage of low ratio concentrate (1:1) and low yield costs (cost per drink being close to $1 per drink) are all considerations that many business owners miss. Many commercial cold brew concentrate makers offer concentrates that cost far less per ounce than what it costs to brew your own. Additionally, more cold brew can be stored since they have a higher concentration. A bottle or bag-in-box with an 8:1 concentration takes up a fraction of the space that in-store brewed cold brew does at 1:1. Some are even shelf stable and don’t require refrigeration until opened.

Now it’s time to ensure that your cold brew sells. Whether you brew your own or buy a concentrate, your coffee needs to appeal to your customers. Flat or “still” cold brew sells moderately well. However, stores that sell both still and nitro are seeing explosive growth of nitro over still. Nitro on tap has led the way in making cold brew something more than just cold coffee – it is, without a doubt, the most talked about and profitable category and defines this “white space”. More and more customers (especially millennials) are looking for premiumized cold coffee beverages. In coffee retail, as well as convenience stores and QSR (quick service restaurants) nitro does it better than any other method of serving cold brew… as long as you don’t run out.

So why is nitro so important to consider? It sells. Nitrogenating cold brew adds texture without compromising flavor. In fact, nitro adds an element of creaminess and perceived sweetness without adding any ingredients except gas. Additionally, nitro has virtually no added prep time as compared to many iced drinks like frappes, iced lattes and smoothies. For business owners, the real profit comes from speed of service. Nitro coffee is delivered on tap and takes approximately 10-12 seconds to pour. Compare that to the minute plus drink prep time for most iced drinks. A busy traffic line can move pretty quickly when pouring nitro coffee on tap. A differentiating menu item like nitro cold brew creates marketability as well as profitability. Again, as long as you have a continuous stream of nitro cold brew, business is good.

While some smaller shops have been experimenting with forced nitrogenating, this method is laborious and limiting. The cold brew itself takes a full day to brew and then the cold brew is placed in a keg at high pressure for up to 3 days to nitrogenate. There are issues with dispense with force nitrogenation – heavy nitro in the beginning and progressively lower nitro pours without constant adjustment to the system. There are some systems that allow for instant nitro infusion. This solves the problem of waiting for a keg to infuse with nitrogen as well as worry free operation. These systems require a keg of ready to drink cold brew as well as tanks of nitrogen. One new technology is the JoeTap CT (the CT is short for countertop) and is the evolution of the original JoeTap. This countertop model allows bag-in-box (BIB) concentrates to be used with mixing ratios up to 16:1. The concentrate is mixed with water immediately before the point of dispense. The JoeTap CT comes with on board nitrogen generation alleviating the need for nitrogen tanks. Easy BIB changes means a small footprint and no downtime for the operator. It is as simple as using a post-mix BIB soda system – change the BIB, pour more cold brew coffee drinks.