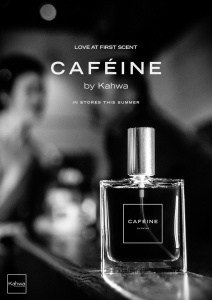 April 1, 2017 [St. Petersburg, FL] — Today, the husband and wife team behind the Kahwa Coffee brand announced their latest venture for the fast-growing Tampa Bay company in the form of a scent. Caféine joins the brand’s growing portfolio that includes 11 retail stores, 650 wholesale accounts, ecommerce and appearances on the multi-channel retailer, HSN.

Kahwa launched a 30 second spot to tout the new scent across social media, which can be viewed at this link.
Sarah Perrier, a former dancer with the Koresh Dance Company in Philadelphia, joins her husband Raphael in a 30-second cinematic social video celebrating the new scent, both of which are a nod to his French heritage and her love of French culture.
“The inviting scent of a good roast is often as good as enjoying the brew it makes,” says Raphael. “Our process to create a scent blending coffee with hints of cherry and honey was as detailed as creating our signature blends themselves.”
The alluring fragrance, soon to be offered exclusively at Kahwa Coffee cafes, is fashionably feminine with a hint of classic masculine accoutrements.

“Many of the leading fashion houses in Milan, Paris and New York have tried and failed to translate that intoxicating smell of bold coffee, in a wearable scent,” says Kahwa co-founder Sarah Perrier. “The fragrance makes a statement that the wearer enjoys great coffee.”

The Scent
Warm and rich new fragrance that captivates from morning to night, like the smell of fresh, hot Kahwa Coffee. Constructed with the heat of that first touch, Caféine by Kahwa creates an undeniable rush of attraction between two people that is long-lasting and addicting.

Notes About the Fragrance
Constructed with the rush of that first touch, the fragrance experience evokes desire with its unique blend of ingredients including arabica beans intertwined with wild tempting dark cherry and delicious honey:

A Magnetic Roasted Coffee Bean Sensation – Crafted from a unique blend of hand-selected Arabica beans from around the world, this combination is meant to capture the undeniable fiery attraction between two coffee lovers.

Tempting Dark Cherry Essence – The luscious, delicious scent of vine-ripened cherries set aglow with a full bodied sweetness that is memorable and intoxicating.

Sunny Delicious Honey – Warm and luxurious, its essence emanates with hypnotic indulgence, bringing an intense brightness and warmth to the fragrance.

Yes, this is an April Fools joke 😉

About Kahwa Coffee
In 2006, Kahwa opened its first shop in downtown St. Petersburg. Both Sarah and Raphael introduced the coffee from behind the counter as the company’s first baristas.

Proudly roasted and packaged in Tampa Bay, Kahwa focuses on blends rather than single-origin coffees in order to bring complex flavors to each cup. The world’s finest 100% Arabica beans are hand-selected and blended before roasting, even though it’s easier and more common to blend after the fact, because not all beans roast well together.

Now celebrating over ten years of good coffee, Kahwa shops can be found around Tampa Bay area — North to Belleair Bluffs and South to Sarasota. The company’s wholesale distribution has exploded to 500 local and national restaurants and five-star hotels across Florida and the entire United States in California, Washington D.C. and Pennsylvania.

Kahwa is the exclusive coffee vendor of the Nassau Airport with three shops, as well as the official coffee of Parrot Cay, a private island resort in Turks and Caicos from the COMO Hotels and Resorts Group and the luxury resort, Amangiri, in Utah’s Lake Powell Region. Kahwa Coffee is featured prominently at Tampa International Airport with the newly opened NewsLink Group in Terminal C and Terminal E.

Voted “Tampa Bay’s Best Coffee” by Creative Loafing readers seven years running, Kahwa Coffee is becoming a regional and national powerhouse, as noted by Winn Dixie’s enthusiasm to carry the brand in dozens of Florida stores, and its multiple appearances on television retailer HSN, which named Kahwa “the best coffee ever!” 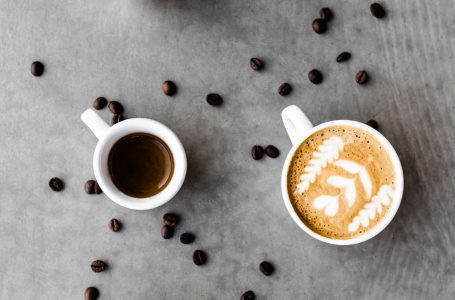 Milwaukee is the best coffee city in...