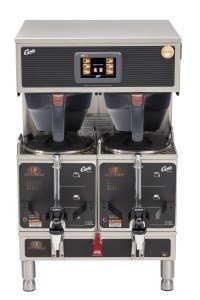 Curtis Gemini® with IntelliFresh® literally remembers freshness settings throughout the dispensing cycle. Putting brains behind the brew, the Wilbur Curtis Company developed IntelliFresh™ Technology as part of their quest to simplify serving a totally fresh, perfectly heated cup of coffee to the masses. Part of the company’s tradition of innovation, IntelliFresh maintains coffee’s ideal freshness and temperature throughout the dispensing cycle by enveloping the satellite with pulses of gentle heat. IntelliFresh settings are locked in just by touching the brew button, and are kept until the next brewing cycle—even if the vessel is moved to a remote serving stand.

Insulated satellite servers feature a unique server connection that literally “remembers” settings both at the brewer and on their remote serving stand as well.